Advanced science is very much in the service of art these days. In the most obvious example, the technology used by movie animators – arrays of cameras that shoot a moving person from multiple angles, then feed those images to a computer that creates a 3-D synthesis of all those angles – relies entirely on giant computers. This technology has almost become necessary for the creation of most popular art forms. But even in the high arts – defined for our purposes as art you see in a gallery – artists are exploring the limits of the most sophisticated of machines.

Examples: Britain-based artist Goshka Macuga got a Japanese android manufacturer to produce a lifelike robot for her: She programmed it to speak quotations from famous thinkers at an art fair in Milan in the spring of last year, and then again in Berlin. Viewers called it uncanny. American artist Jordan Wolfson also created a frightening android-puppet to terrorize an audience at a New York gallery this year: it had fibre-optic eyes that could follow visitors around, using facial-recognition software.

In these cases, the engineers are as much creators of the work as the named artists are. What is the difference between art and technology here? After all, the most advanced of technology has always been indistinguishable from magic.

Let's look at a less highbrow example: The artwork of a brilliant South African computer programmer called Jonty Hurwitz. He has received much media attention, including a segment on CNN, for creating "the world's smallest sculptures" (as confirmed by the Guinness Book of Records). They are smaller than the width of a human hair and are only visible through a microscope. He has created these invisible things – nude female forms, mostly – using a technology called "multiphoton lithography," accomplished by scientists at the Karlsruhe Institute of Technology in Germany. It involved laser beams activating two photons so that they form one tiny mass. Hundreds of these masses are slowly agglomerated, by the lasers, under a microscope, in the shape of the sculpture.

Hurwitz is called an artist on his own site and by all the media who are entranced by the idea of miniature sculpture, and of course what he does is artistic. There has always been a fascination with miniatures, in art both Western and Eastern (indeed, the Art Gallery of Ontario will be showing, until Jan. 22, a breathtaking collection of highly detailed miniature wood religious carvings from Europe of the 1500s). Those were done by hand, though.

And indeed, the creative part of Hurwitz's art-generation – the imagining or sketching of the image itself – was strangely glossed over in the media coverage of his work. Where did the images for the sculptures – those naked women – come from? Had they been drawn by Hurwitz? Were they a smaller version of objects he had made by hand? No, it turns out they were created by teams of animators using a live model. She posed in front of an array of cameras (the same array I mentioned at the top of this column) and they turned the photographs into a 3-D image, the same way they do for movies. The 3-D laser printer then did the rest. (One of the nano-sculptures is actually simply a copy of a famous 18th-century sculpture – Cupid and Psyche by Antonio Canova – presumably photographed and reproduced in the same manner.) Hurwitz himself didn't draw or sculpt anything. So, although this is nominally art, it is boring art. It's all about a technical accomplishment, not an original aesthetic vision.

An interest in minute particles also informs the work of Canadian poet Christian Bök, whose work implanting sequences of words in microbes I have had occasion to describe in this space before. It is worth mentioning again here because it is such a more interesting foray into the microscopic than the pure scientists have been able to come up with. His "Xenotext" project involves inscribing words into the DNA of a certain bacterium. The words also serve as instructions to the bacteria to generate a certain protein, which will be a code of its own. The microbes write their own poetry. The twist is that this particular microbe, deinococcus radiodurans, is extremely hardy – it can survive in the vacuum of outer space, and so can in theory outlive humanity, even in the event of major environmental catastrophe or nuclear war. So it is at once self-generating poetry and permanent storage device.

Bök has used scientists and labs in his progress toward making this living poetry work, and he has received science research grants (and by the way, it isn't working yet). It is worth noting, however, that the sequence of words planned for the microbes are written by him. The first line implanted into the microbe, is, "Any style of life/ is prim," and the second, to be generated by the microbe, is "The faery is rosy/ of glow" – which you will see contains the same number of letters, because it is a monoalphabetic substitution cipher for the first (i.e. each letter in the first corresponds to another letter in the second). And the whole project comes with a full-length book of poetry you can buy at your local bookstore.

However, it is still interesting that the two sides are converging, in labs, and that the roles of scientist and artist are looking increasingly similar. 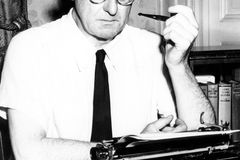 Russell Smith: In face of extremism, entirely new art forms may emerge
November 16, 2016
Russell Smith: Forging the bond between creativity and anxiety
November 9, 2016
Follow us on Twitter @globeandmail Opens in a new window
Report an error Editorial code of conduct
Due to technical reasons, we have temporarily removed commenting from our articles. We hope to have this fixed soon. Thank you for your patience. If you are looking to give feedback on our new site, please send it along to feedback@globeandmail.com. If you want to write a letter to the editor, please forward to letters@globeandmail.com.
Comments