There are a few more weeks left in the monumental retrospective of Alberta artist Alex Janvier at the National Gallery in Ottawa, and I shouldn't be surprised that it has not received more national attention. The fact that this creator of gorgeous and sensual abstracts is not well-known outside western or aboriginal circles of expertise – despite his having won the Governor-General's Award and the Order of Canada – speaks to fault lines in the country (or, as one might describe it, Toronto myopia).

Janvier, from Cold Lake First Nation, is of Dene/Saulteaux descent, and as a child was sent to a residential school where his talent was noticed and he was encouraged to paint. He was part of a group of aboriginal artists in the 1970s that is sometimes called the Indian Group of Seven (formally it was the Professional National Indian Artists' Incorporation). It included Daphne Odjig and Norval Morrisseau, names that became arguably better known than his. Janvier's work is to my mind, however, the most subtle in its combination of folkloric First Nations iconography and European and U.S. mid-century abstraction.

Janvier is perhaps best known for a couple of large public art installations: a large tile mosaic on the floor at the Rogers Centre in Edmonton and a huge mural at the Canadian Museum of History in Ottawa (called Morning Star, it's 418 square metres). But it is Janvier's early work, from the sixties and seventies, that soothes and thrills me so much: abstract patterns like doodles that cover only parts of a canvas in snaking lines and blooms. They are usually brightly coloured, in a soft palette, purely pleasurable as designs, until you look up close and see half-buried traditional motifs: the stylized eagle heads and familiar patterns of Plains and West Coast indigenous art. From afar, these patterns can look like topographical maps or aerial photography: The jagged or curved lines over blank areas resemble rivers, the drawn clusters like woods. The white background Janvier so adores is pure as fields of snow. And here and there flowers bloom, delicate and life-sized.

They are more than beautiful patterns, however: Their names – Coming of the Opposite, for example – refer to the artist's philosophical and geographical symbolism, and some are expressly political. For years he signed his works "287" – his band's treaty number. The giant red painting called Lubicon (1988) once had a white background; Janvier filled it in with fire-engine red as an expression of rage at careless exploitation of Lubicon land. It's funny though: Even the works that are labelled as angry or melancholic by Janvier's titles still seem fundamentally joyous, a revelling in happy colour and pleasing, sinuous line.

For a while Janvier worked only on circular pieces of paper, and the mosaic in Edmonton is also circular. The shape has a spiritual significance to the artist, but it also evokes its period in popular culture: Sixties psychedelia, with its mandalas and peace signs. When Janvier turned to figuration in the 1990s, and started to include recognizable animals in his designs – a beaver here, a deer there – they became less interesting, to me at least, far more conventional and familiar.

In another room of the National Gallery, there happens to be a temporary show on Russian abstraction of the revolutionary period – Malevich, Popova, El Lissitzky. It's a pleasing conjunction: It's surprising how direct the lines are between these largely geometric shapes and Janvier's swirls. Janvier himself has spoken of a debt to Kandinsky. Like the formalists before him, Janvier is playing with ideas of purity and simplicity, of the beauty of line floating in a void. His work is essentially modernist, not postmodern nor didactic. This is not work to be admired because it is good for you or because it is of ethnological import: It reminds us of that astounding pleasure and troubling emotion to be had – in equal measure – in works of art that combine technical mastery with an actually original vision of a world we thought we knew. 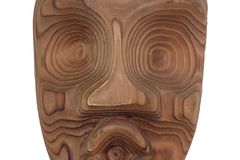 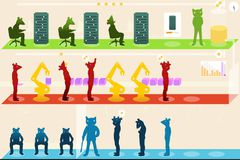 Seven decades on, painting is still a mystery for Montreal’s dancer in the snow
February 10, 2017
Follow us on Twitter @globearts Opens in a new window
Report an error Editorial code of conduct
Due to technical reasons, we have temporarily removed commenting from our articles. We hope to have this fixed soon. Thank you for your patience. If you are looking to give feedback on our new site, please send it along to feedback@globeandmail.com. If you want to write a letter to the editor, please forward to letters@globeandmail.com.
Comments