A blog is a hobby; a blog is a notebook; a blog is a forum; a blog is a piece of art. A blog is unpaid, and so can rewrite our idea of what a journal is, what publication is. It reminds us that, in the age of culturecrat jargon such as "viability" and "private-public partnerships," we can give away art entirely for free and that art can infiltrate a larger culture and therefore be worth something all on its own.

Here's a blog I like: It's called "Sunrise With Sea Monsters," and it's a project of the Canadian poet and editor Paul Vermeersch (who is also a colleague of mine in the small-press publishing trenches). It is a poetry journal: He asks poets to contribute poems whose only constraint is that they be titled Sunrise With Sea Monsters. This is the name of a rather odd 1845 painting by J.M.W. Turner, currently on display as part of a Turner show at the Art Gallery of Ontario.

The painting (which usually resides at the Tate in London) is unusual for Turner in that it is fantastical: It is a blurry yellowy-brown seascape with a vague, threatening, monstrous shape looming in its centre. The central form could be made up of two fish, but together they seem to form the sketch of a face with large eyes. Nothing in this scene – neither sea nor sky nor animal – has a clear outline. It is almost abstract and so an exemplar of Turner's daring formlessness. 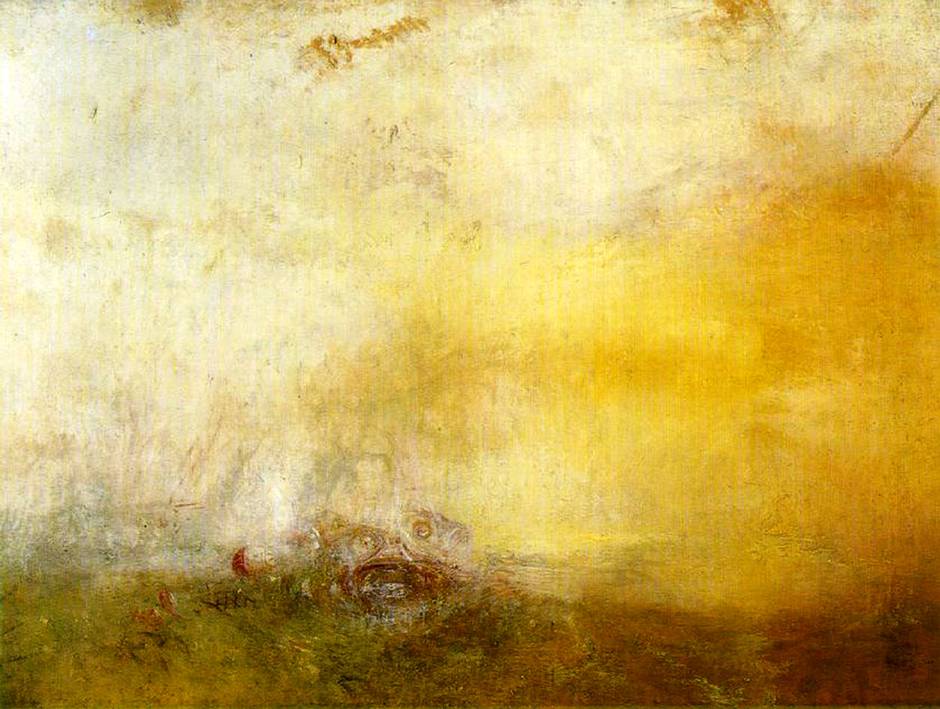 Sunrise with Sea Monsters is an 1845 painting by J.M.W. Turner, currently on display as part of a Turner show at the Art Gallery of Ontario.

The poets eagerly agree to play the game, and Vermeersch has amassed nine of these exercises, all wildly different, and none referring specifically to the painting (aside from their titles). There is a lovely melancholy one from Stevie Howell (“It’s Spartan, to try & / fall asleep at dawn in / the bed of a man you / just met.”). There’s a dense one, both tactile and cerebral, from Jeramy Dodds. (“With a tall Tanqueray I watch the tornado footage: / aerials bent to mantis elbows while the corn rows rose.”). There is a concrete poem by Conor McDonnell, a simple experiment with typography.

An ekphrastic poem is one that describes a work of visual art, real or fictional. But these are not, Vermeersch insists, ekphrastic. They merely share the same title as the painting. The title – perhaps its words alone – it’s a stepping-off point for a journey elsewhere.

Neither are they occasional poems (poems written for an event or occasion). Vermeersch chose this painting not because it happens to be part of the blockbuster Turner show, but because he always liked it. He had done the same a few years before with another painting, They Will Take My Island, by Arshile Gorky, which generated another series of fascinating and tangentially related poems, including a powerful cry of sympathy by Jonathan Bennett about a child with Asperger’s. (“He is larval. At one with his beloved insects, / murmuring, worrying about F3 tornadoes.”)

Poets seem to love these challenges. They are almost like a parlour game, a game of association: You have these words to work with, go. This is the challenge faced by the improv comedian.

But, indeed, all artists need exercises in order to get them going. One’s best work can come from an exercise or a formal constraint. Why is this? Is life itself not enough to inspire? Why do we need, sometimes, a trigger for a creative flight?

The most postmodern of theorists might even say that there is no such thing as inspiration from life: There is only other art. In other words, one makes art because one has seen art and wants to participate in it, to play the game, not because one has seen a sea monster. That is a bit extreme. But, in a sense, all art is about other art, if only in that it cannot help but refer to art that has preceded it. If it is a poem, it echoes all other poems that use the same language; if it is a painting, it exists in a continuum of paintings with the same colours or themes. Not convinced? Note how many artists preface descriptions of their work with the phrase, “It’s an exercise in …” The words that follow could be anything – line, colour, silence, changing scales, transgression – but the idea of the exercise is constant. (Evelyn Waugh, for example: “I regard writing not as investigation of character, but as an exercise in the use of language, and with this I am obsessed.”)

What is an exercise? It is at once practice, workout and game. In art, the rehearsal room and the stage are often the same space.

Editor's note: Stevie Howell's name was incorrectly spelled in an earlier version of this article.