Montrealers tend to think that there's too little remaining from Expo 67 and far too much left from the 1976 Olympic Games. The city's recent past might have been very different if the Olympic Stadium had been as easy to clear away as most of Expo's pavilions.

Acknowledgments of the Games' 40th anniversary this month have mainly been sombre. The competitions were over in 16 days, but the $1.2-billion Olympic debt weighed on the city and the province for 30 years. The stadium, which alone cost around $1-billion, is still under perpetual repair for its dysfunctional roof, with further costs of $220-million projected by 2025.

The negative energy of that ordeal radiates even through the fiercely chipper current exhibition about the Games at the Maison de la culture Maisonneuve, just down the road from Olympic Park. The show, which improbably calls the Olympics "an unprecedented success," skims over uglier truths too deeply ingrained in public memory to bear repeating. The exhibition organizers would prefer that we celebrate the efforts of thousands of Montrealers who ensured that the 1976 Olympics, as an event, ran smoothly.

The other, better-remembered story can still amaze and appall even after four decades. What began as an effort "to stage modest Games that would pay for themselves" turned into an uncontrolled building spree in which even the parking garages ended up costing five times the original estimate.

Many factors lay beyond the organizers' control. The subsoil beneath Olympic Park was less stable than expected, wage and price inflation was rampant, a recession hit in 1974 and a labour conflict stopped all work for 155 days in a six-month period leading up to the Games. Far too much of the Olympic infrastructure was built in a last-minute frenzy of overtime.

Other signs of trouble ahead might have been evident on the day in 1965, when mayor Jean Drapeau, who already had Expo on his near horizon, surprised everyone with his first Olympic pitch, for the 1972 Summer Games.

He hadn't bothered to talk with the Canadian Olympic Committee, which was absorbed in Calgary's bid for the Winter Olympics. He had apparently not concerned himself with whether the federal government would go along, so soon after bankrolling Expo. The Games, for him, were all Montreal's business, just another part of what he called "a series of five-year expansion plans to establish Montreal among the great cities of the world."

Had that worked out, the city would have built and hosted Expo 67 and the 1972 Olympics – two gigantic projects – within five years of each other. Who knows what big jamboree the mayor had in mind for 1977?

In that hubristic spirit, once the 1976 Games came his way, Drapeau selected an architect for Olympic Park with no open competition, nor even a signed contract spelling out the extent and limits of the brief. The mayor didn't break stride when the federal government formally disowned, in advance, any possible deficit – a move that later provided political capital for René Lévesque and the Parti Québécois.

Disastrously bad management of the building program was laid out in painful detail during a provincial inquiry convened to find out how Drapeau's "modest Games" had gone so wrong. The inquiry's final report found his leadership of the event incompetent and irresponsible. Corruption charges were brought successfully against senior officials. The Montreal Olympics became an international symbol of how the Games can become a Trojan horse that destroys those who drag it inside their city gates.

More important for Montreal, the Olympics had a profound effect on the means and ambitions available for public building projects. The stadium more or less killed interest in landmark architectural projects, in Montreal and Quebec generally. The "starchitect" who arrives with expensive unworkable plans is a figure of collective nightmare. Whenever a new public building goes up, the watchwords are functionality and cost control.

The Grande Bibliothèque and the Maison symphonique, to name two prominent examples of the past decade, do exactly what they're supposed to do and make no great impression on the street. A more dramatic Bibliothèque design by the high-flying Zaha Hadid was turned away in competition. In Quebec City recently, the benefactor whose name is on the understated new Pierre Lassonde Pavilion at the Musée national des beaux-arts du Québec spoke of the starchitect phenomenon with disdain, adding that his proudest boast was that construction costs had run only 3 per cent over budget.

Keen interest in cost engineering, to use the architects' phrase, became necessary in Montreal while trying to build out from under the Olympic debt. Even so, the construction and maintenance of public works suffered. When Toronto was enjoying a building boom of cultural facilities a decade ago, Montreal was sinking its share of federal infrastructure money into long-delayed upgrades of sewers and pipes.

As architectural objects, Roger Taillibert's Olympic Stadium and Velodrome (which is now the popular Biodome) are still the city's most spectacular buildings. Their flowing organic design was often called futuristic when they were new, but it's more prehistoric, reminiscent of the exoskeletal structure of trilobites. Biomorphic form in architecture is never easy, and always stands apart from the rest of the built environment. This suite of biomorphic Olympic buildings was intended to astonish.

What a pity it never worked properly, and cost so much. Taillibert was allowed to sin against the two architectural imperatives – utility and economy – that have ruled in Montreal ever since.

His stadium today has no anchor tenants. A recently announced plan to install office workers in the spatulate leaning tower, which has stood empty since it was added in 1986, will cost $60-million for renovations.

The Montreal Expos left the stadium in 2004, and the commissioner of Major League Baseball has said another franchise for the city would require a new building. He offered no clues as to how to find the means to build a new one while still paying for the old. I do have a suggestion for the next architect: Try building something scaled so that pop fouls don't ricochet off the roof. 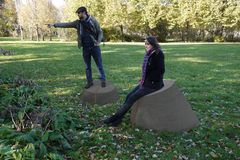 Quebeckers take pride in their culture, but don’t like to write cheques for it
May 13, 2016 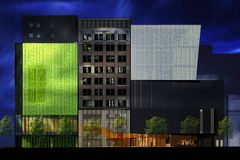 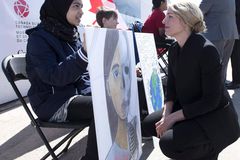