The West tends to see modern-day Syria through a dark prism – a land of unending violence and hopelessness, of human and architectural destruction, of sectarian bloodletting and desperate refugees, a site of U.S. passivity and Russian interventionism, a country where names of cities such as Aleppo and Homs have become synonyms for suffering.

There is another Syria, however. An alternate or parallel Syria, if you will, spanning millenniums, encompassing diverse yet interconnected cultures, peoples, religions and languages. Ancient interconnections that speak of continuities and continuations and resiliences perceptible, perhaps, in the quiet moments between explosions, the cries of the wounded, the scream of a jet-bomber, the whoosh of an Islamic State executioner’s sword. 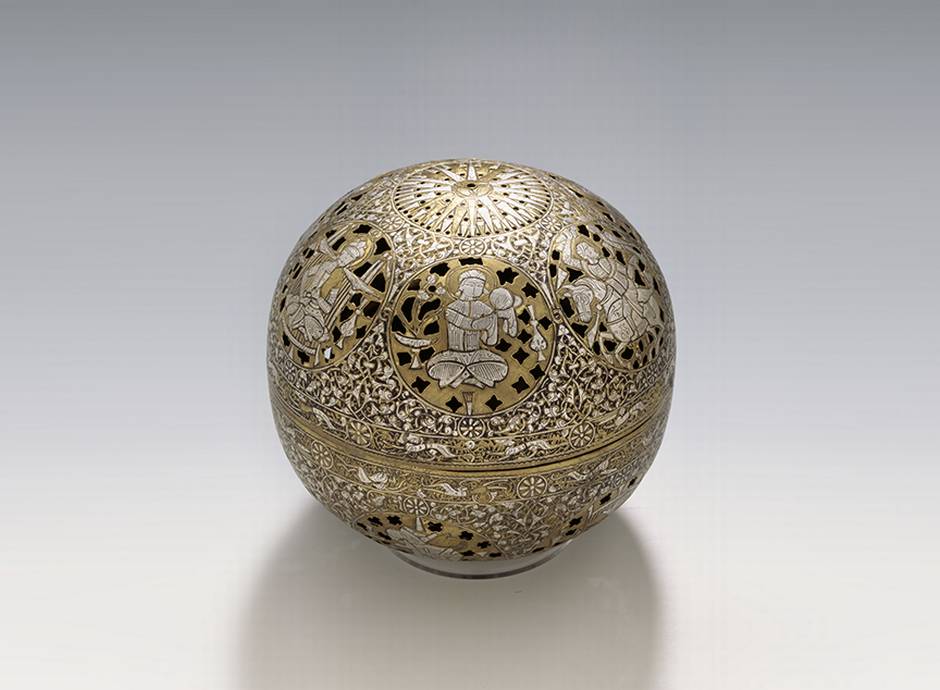 Certainly, that’s the sense you get in the stillness of Toronto’s Aga Khan Museum, where a timely and absorbing show, Syria: A Living History, opens this weekend for a run into late February, 2017.

It’s a compact exhibition, just 50 or so objects and presentations drawn mostly from seven institutional collections, including the Louvre, New York’s Metropolitan Museum and the Royal Ontario Museum, as well as the private holdings of Torontonians Marshall and Marilyn Wolf. Yet, there’s a density and gravitas here that makes it seem very full indeed, albeit without the bloat that can accompany shows of an omnibus, centuries-hopping ilk. 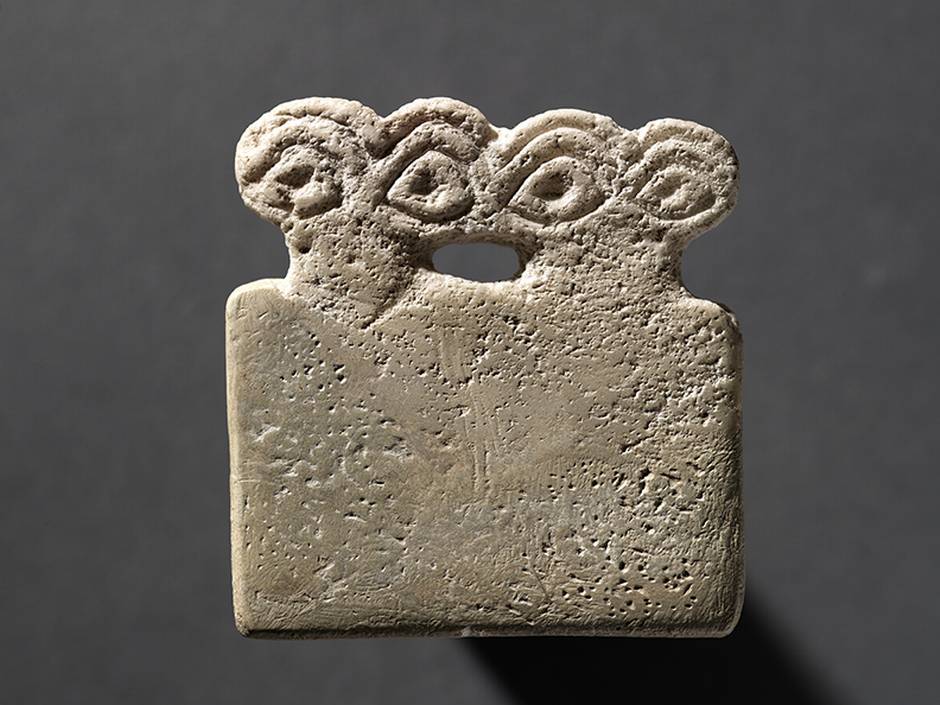 Curators Filiz Cakir Phillip – she’s head curator at the Aga Khan – and Nasser Rabbat – he’s director of the Aga Khan Program for Islamic Architecture at MIT – have wisely scrapped taking a chronological course, using instead themes such as divinity, the home and humans and beasts to organize the figurines, vases, steles, textiles, flasks, panels, fragments and stone reliefs. The oldest loan to the exhibition, from the ROM, is also one of the most tiny and delicate – a piece of gypsum, dating to 3200 BC, carved into the shape of two pairs of eyes.

Unsurprisingly, none of the artifacts is from Syrian museums because, as Rabbat notes, “It’s impossible to ship things out of Syria at this time.” At the same time, the show is not just an homage to ancient glories and apolitical as a result.

There are, in fact, several works by prominent contemporary Syrian artists, young and old, including the exhibition’s opening salvo, a large, churning canvas of despair called Deluge: The Gods Abandon Palmyra, completed in 2012 by Elias Zayat. 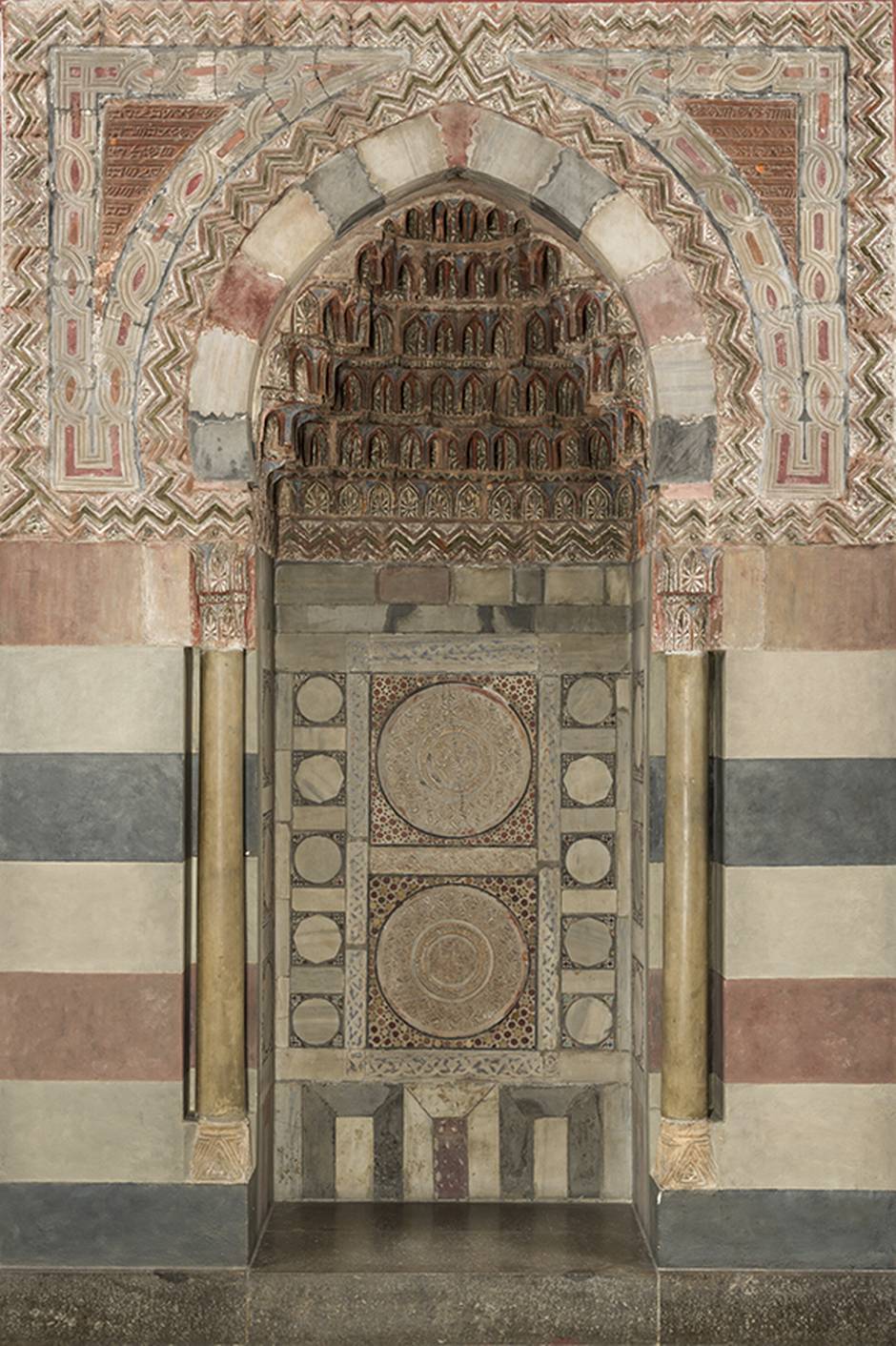 Near the exhibition’s exit, you’ll find a digital reproduction of Tammam Azzam’s somewhat more hopeful Gustav Klimt the Kiss (Freedom Graffiti) from 2013. Azzam’s original superimposed an oversized version of the famous Klimt image on the howitzer-scarred, bullet-pocked exterior of an abandoned Damascus apartment. At the Aga Khan, the wall image has been affixed with binder clips to which patrons can insert their own written prayers, messages, comments, calls to action and protests.

Now based in Dubai, Azzam also is represented by a large painting from his Storeys Series – vivid, sobering Anselm Kiefer-like depictions of the incredible havoc wrought by the civil war on Syria’s cities.

Rabbat and Cakir Phillip began to pull the show together only in February of this year, driven by a desire to illustrate the composite, multicultural character of Syria and how “it contributed to all the great civilizations that grew up around the Mediterranean.” 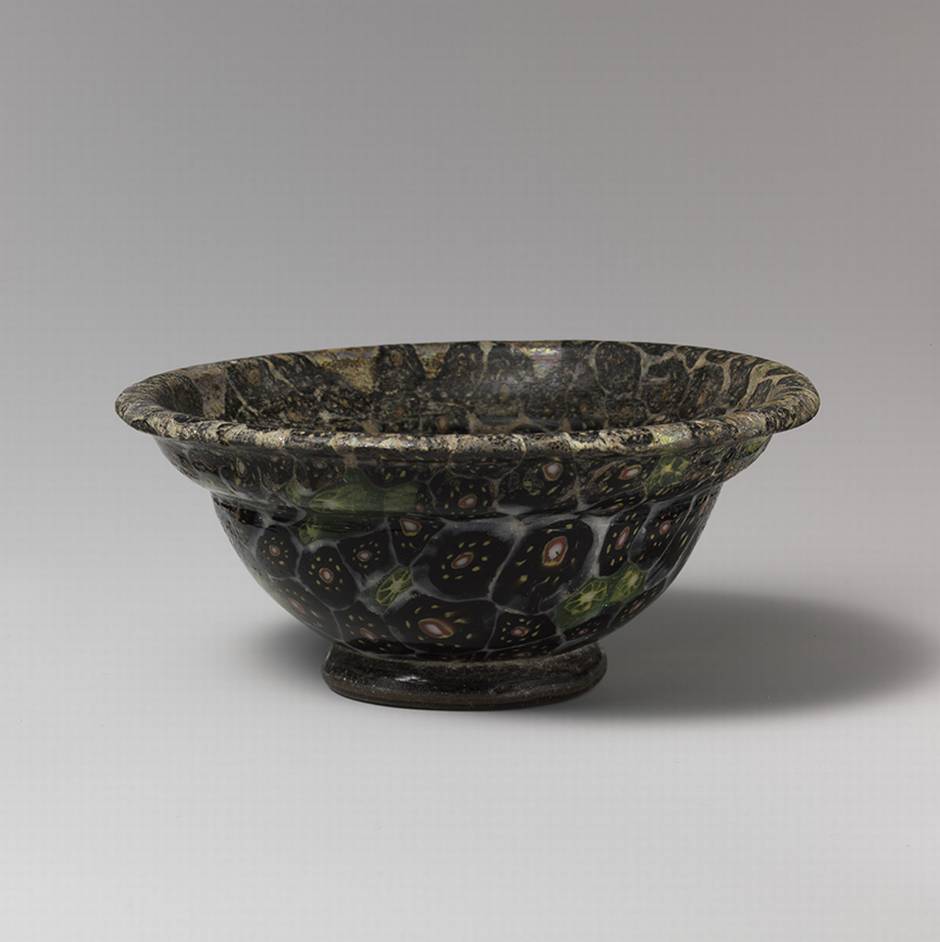 Indeed, what likely will be most impactful on visitors will be the sheer heterogeneity of the Syrian experience. You think we live in an era of appropriations and mashups? We have nothing on Syria, which, over 5,000-plus years, has either adopted or adapted influences, large and small, from myriad ethnicities and religions – Mesopotamian, Greek, Roman, Byzantine, Persian, Ottoman, Arab, pagan, Christian, Jewish, Muslim, to name just the proverbial few.

The classical influence of ancient Greece and Rome and, later, early Christianity “are not like little layers in the history of Syria; it’s a thousand years of presence,” Rabbat observes. 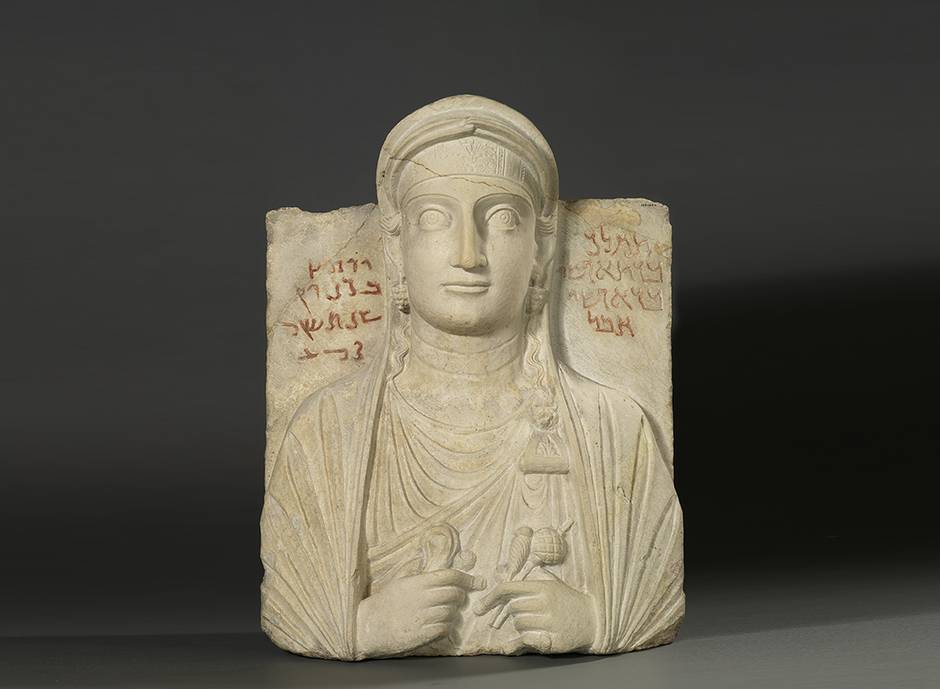 Arabic only became the dominant language, superseding Aramaic, in the seventh century, Muslim the dominant religion in the 12th century. It was the Greeks of Alexander the Great who introduced the name “Syria” to the area in the fourth century BC. The followers of Christ were first called Christians in the Syrian city of Antioch. In other words, one of A Living History’s “residual” benefits is that it makes Syria seem less “other,” more close to our polygot polity.

Each visitor will, of course, have his or her favourite artifact or moment. I must say at this time I’m quite partial to the lion’s head, the masterfully carved ivory from the eighth century BC that’s rightly serving as the show’s de facto emblem. It’s small – there’s speculation it was originally a chair ornament – but packed with coiled power. 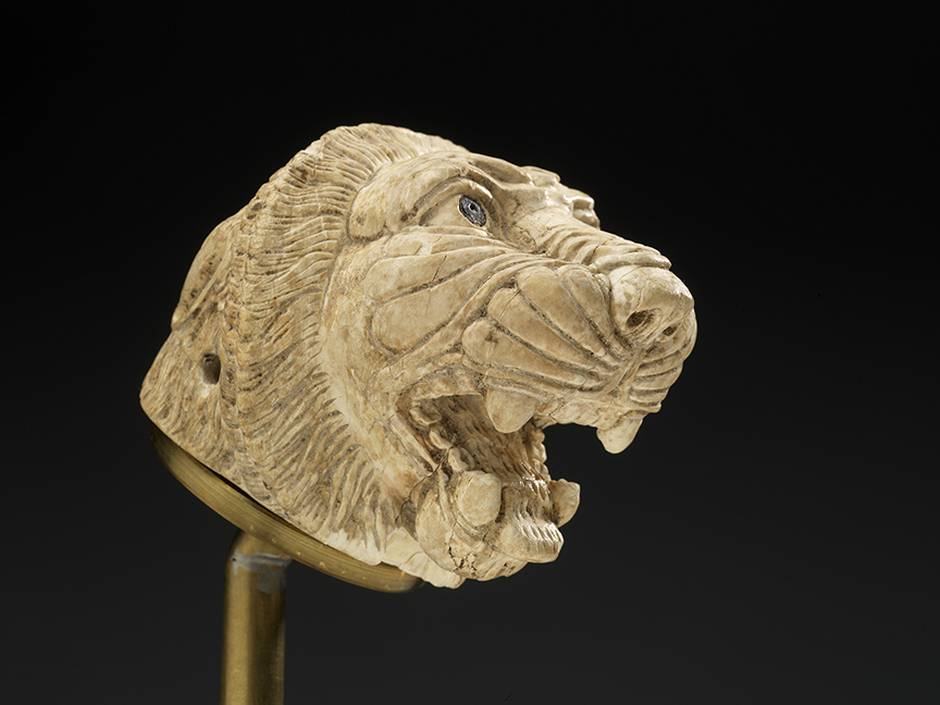 Also compelling is the vitrined pairing of a Palmyrene tomb relief dated to 123 AD with a section of a 14th-century edition of the Koran telling of the Prophet Mohammed’s “night journey” to Jerusalem from Mecca and thence to heaven. The relief, in limestone, portrays the head and upper torso of a young woman, Tiklak by name, whose name and genealogy are incised on each side of her head in Palmyrene Aramaic. She’s the Mona Lisa 1,400 years before Leonardo got around to painting her.

Another effective pairing, this time from Berlin’s Vorderasiatisches Museum, positions a basalt relief of a six-fingered, ninth-century BC archer to the left of a rearing deer, also carved from a block of basalt. Each is just about the largest thing in the entire exhibition – which is another way of saying Syria: A Living History is about small treasures, mostly – those invitations to close-looking that can deliver an aesthetic pleasure out of all proportion to mere size.

Syria: A Living History is open now at the Aga Khan Museum, 77 Wynford Dr., Toronto, through Feb. 26, 2017. The second annual Aga Khan Museum Lecture, Heritage and Conflict: Syria’s Battle to Save Its Past, will be delivered by Maamoun Abdulkarim, Syria’s director-general of antiquities and museums, on Sunday at 2 p.m.