Long before the technology existed to support his vision, Jeffrey Shaw wanted to create works that would physically engage the viewer; works that would come to life as a consequence of the interaction. Rebelling against the more familiar traditions of painting and sculpture (which he had studied), in which the viewer was a passive observer, Shaw experimented in the pre-digital years using everything from slide projectors to inflatable sculptures. By the late 1970s, he had made his first foray into computer-based works.

Shaw, now 70 and dean of the School of Creative Media at City University of Hong Kong, is considered a sort of godfather for immersive art experiences – a pioneer and master in the field. Now, for the first time, his work is being shown in Canada.

Hidden Pasts, Digital Futures: A Festival of Immersive Arts has just opened in Vancouver, where a futuristic, high-tech window is opening to the past. A series of immersive art installations, including four by Shaw, will take viewers (a word that doesn't seem to quite cover it) to ancient Chinese caves, an Indian pilgrimage site, a historical (mostly destroyed) Vancouver neighbourhood – and beyond. (Full disclosure: I am moderating a panel on Saturday at the festival.)

"This unusual work I think [is] the way of the future. It seems to be new audiences want this kind of stuff, they want that kind of exploration," says Michael Boucher, director, cultural programs and partnerships at Simon Fraser University Woodward's, and the curatorial lead on this project, which is part of Simon Fraser University's 50th anniversary celebrations.

Pure Land: Inside the Mogao Grottoes at Dunhuang, conceived and designed by Shaw and his collaborator, Sarah Kenderdine, is an animated 3-D experience that allows visitors to virtually visit one of the Caves of the Thousand Buddhas, a UNESCO World Heritage Site in the Gobi Desert now under threat because of tourism and climate change.

"I try to help people to understand it by saying, 'Imagine what it would be like if there were 100 Sistine-quality chapels in one place,' " Shaw says of the fragile caves.

In this simulated experience, the visitor to the virtual cave (Cave 220, which dates back to around AD 640) is guided by a navigation tool – an iPad – that acts as a flashlight and a magnifying instrument, allowing things to be seen in greater detail than with the naked eye. And within the 360-degree, interactive enclosure, areas of the painting have been animated – for example, dancers in the fresco come to life, with 3-D video inserted into the scene. 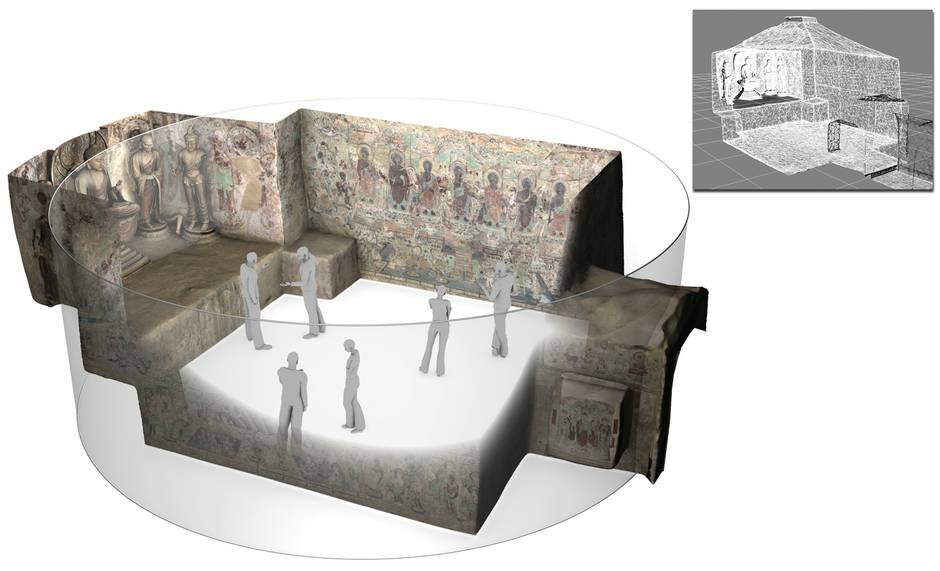 Pure Land: Inside the Mogao Grottoes at Dunhuang allows visitors to virtually visit one of the Caves of the Thousand Buddhas. (Sarah Kenderdine & Jeffrey Shaw, Applied Laboratory for Interactive Visualization and Embodiment)

Shaw – who was born in Melbourne, Australia – explains that this work was originally undertaken as a research project as he and his team explored “a vocabulary of interpretive strategies,” he says from Hong Kong.

Another highlight of the show is another Shaw/Kenderdine collaboration Place-Hampi, an interactive, 360-degree display that immerses viewers in a different World Heritage site, this one in Hampi, India.

Robert Lepage’s Fragmentation – a five-screen installation that examines a sequence from his epic stage production Lipsynch from different angles – will also have its Canadian premiere at the festival.

Of particular interest to Vancouver audiences is the Canadian premiere of Stan Douglas’s Circa 1948. This immersive, interactive version of the app of the same name recreates two Vancouver sites – Hogan’s Alley and the original Hotel Vancouver, neither of which exist any more. Inside a wrapped 12-foot cube, the viewer’s body becomes the interface – like a human joystick – moving through streets and the hotel by leaning and other physical movements.

Years in the making, Circa 1948 was inspired by Douglas’s work creating the innovative green screen theatre work Helen Lawrence with Chris Haddock.

“It stopped being an artwork at a certain point and became more of a game. But it’s still doing storytelling in a fairly innovative way,” Douglas said during an interview at the National Film Board’s Digital Studio in Vancouver. The NFB co-created the work.

It’s another example of something that exists because technology caught up with the artist’s vision.

“We were demanding a lot of technology and lucky it did take so long, because eventually the technology was able to do what we wanted it to do,” Douglas says.

“I’ve got to learn that [because] I could imagine something could be done, doesn’t mean I should do it.”