It’s said that a city – a city like Toronto, say – whose boosters often rely on the adjective “world-class” to describe both its overall grooviness and its particular charms can’t, in fact, be truly world-class. You’re either world-class or you’re not and no amount of huffing, puffing or tub-thumping is going to grant a burg that cachet. World-class, in short, is self-evident and unspoken.

Still, you can’t keep a person from thinking something’s world-class. Which is, in fact, what I was thinking one cool, overcast morning last week while touring the Aga Khan Museum with educational consultant Patricia Bentley. The museum, which opens Thursday (a ceremonial opening, featuring Prince Shah Karim Al Hussaini Aga Khan, was held Sept. 12), has been a long time coming, Toronto having been named its home 12 years ago this October by the prince, spiritual head of the planet’s 15 million Shia Imami Ismaili Muslims. 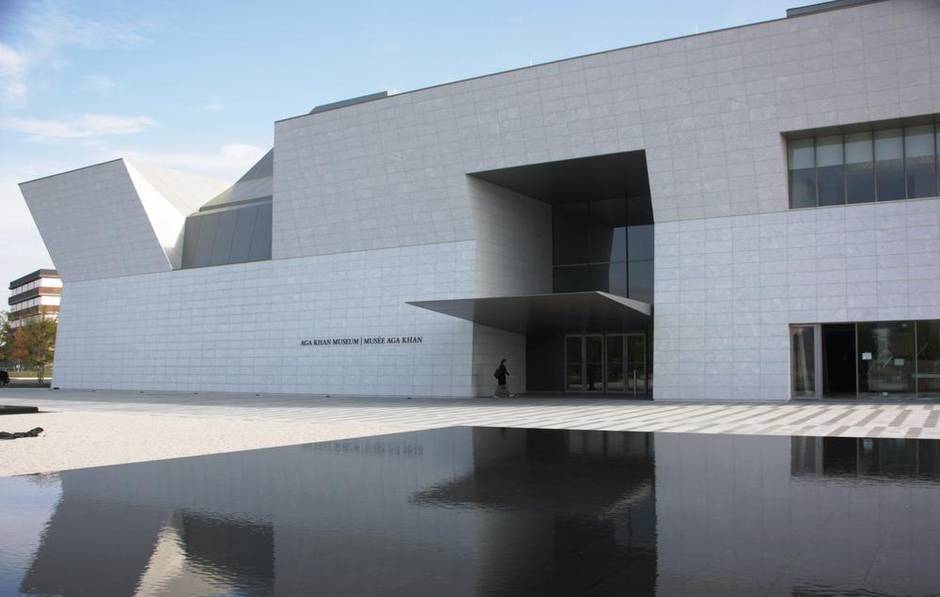 The entrance to the Aga Khan museum in Toronto is seen on Sept. 9, part of a new $300-million complex located on a seven-hectare site near the Don Valley Parkway. (Colin Perkel/The Canadian Press)

Yet for all the waiting, the museum seems destined to become both major cultural destination and player in very short order. In fact, doesn’t its completion atop its seven-hectare site on the brow of the Don Valley Parkway seem almost … sudden? Perhaps this is because the 10,100-square-metre museum, with its elegant gardens, five reflecting pools and adjacent Ismaili Community Centre and mosque, seems to have unfolded in very slow motion, quietly, without hype, with the sort of discretion only a $300-million-plus budget can buy. Forty-odd years ago the British rock group Yes sang about how “mountains come out of the sky/And they stand there.” There’s something of that quality to the two graceful monoliths plunked serenely near the incessant riverrun of traffic up and down the Parkway.

The world, of course, has many museums and galleries with space devoted to Islamic art. Toronto’s own Royal Ontario Museum, for example, has a curator of Islamic decorative art and its Wirth Gallery of the Middle East contains Islamic artifacts. But the Aga Khan Museum is being touted as the only institution in North America dedicated solely to the panoply of Islamic art – painted illustrations, ceramics, weavings, calligraphy, scientific instruments, paintings, clothing, myriad editions of the Koran.

The permanent collection, which until now has been housed in Paris, London and Geneva, numbers more than 1,000 artifacts, of which about 250 will be shown at any one time in Toronto as part of a policy of “quite frequent rotation,” Bentley said. It’s not an especially old collection. Although the pieces span roughly the seventh to the late 19th centuries, most have been acquired only in the past 60 years. Unsurprisingly then, the collection is testament to connoisseurship and curatorial savvy. 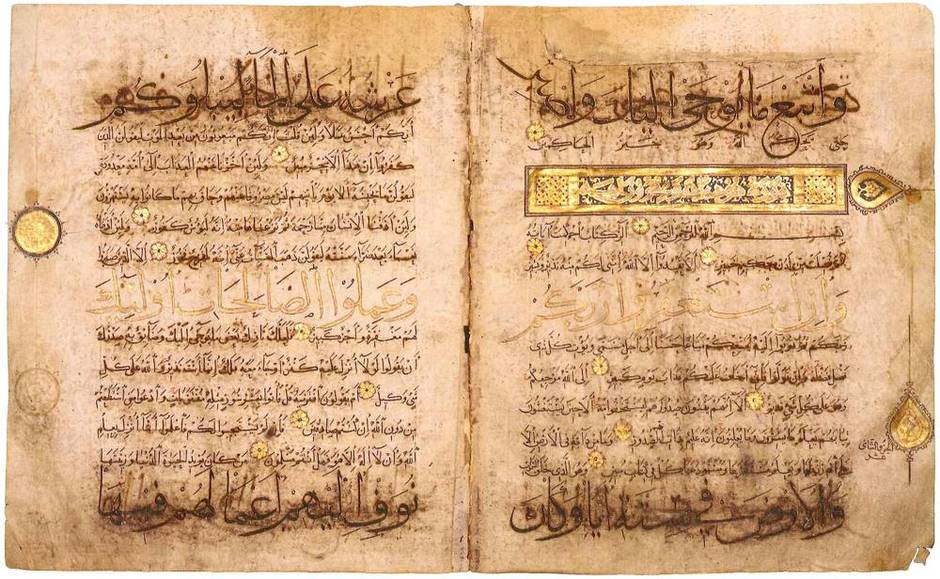 There are varying suggestions as to where this Quran may have been produced. Although an Il-Khanid Persia or Mamluk Egypt origin cannot be discounted, this Quran has certain features that suggest a different place: Yemen, during the period of Rasulid rule (1229-1454 CE). (Aga Khan Museum)

Artifacts are displayed on two floors, in large, high-ceilinged, discreetly lit white rooms with teak floors. The main-floor space prefaced by a corridor illuminated by an arresting series of video animations, has its treasures arranged chronologically on an L-shaped footprint, and is decidedly Catholic in its presentation. There are three large vitrines displaying Korans of varying degrees of calligraphic magnificence; a 10th-century inkwell carved from rock crystal; a marble fountain, with geometric mosaics, from a palatial courtyard in 15th-century Egypt; a tunic of beige brocaded silk worn by a horseman in 14th-century Iran; the oldest-known extant version of The Canon of Medicine, compiled in Persia in the 11th century; a bronze astrolabe with silver insets from 14th-century Spain, its surface inscribed in Arabic, Hebrew and Latin.

Bentley noted that to many Westerners, Islam is a stern theocratic monolith when, in reality, it’s been a multiplicity of dynasties and civilizations encompassing more than 1,000 years, its reach extending far beyond the Arabian Peninsula to Spain, Africa, Indonesia, the Indian subcontinent and the gates of China. “Our biggest message here really is diversity,” Bentley said, “and how Islam has always responded to local traditions.” Moreover, it’s “not true there is a prohibition against figurative images in Islamic art,” she said. Yes, there is no figuration in the Koran nor images in mosques but, as the Aga Khan Museum shows, figural motifs – human, animal, fanstastical (including dragons and harpies) – were a staple of Islamic artistic expression.

One of the finest examples of this is found in the museum’s second-floor gallery. It’s an illuminated folio called The Court of Keyomars, attributed to the 16th-century Iranian artist Soltan Mohammad, painted on paper in opaque watercolour, gold, silver and ink for Shah Tahmasp I. Astonishingly detailed, exquisitely executed (some of its strokes were reportedly made by a single squirrel hair), luminously lyrical, the scene depicts a seemingly levitating mythical king and his turbaned courtiers blissed out in a paradise of riotously coloured vegetation, rocks and water. Said Bentley: “It’s considered by many scholars to be the greatest masterpiece of Persian and Moghul painting.” The folio is one of dozens of works in In Search of the Artist, a themed show, culled from the Aga Khan’s permanent collection, highlighting recognized Iranian and Indian painters and drawers from the 16th through 18th centuries, artists largely unknown to Western eyes yet as hefty in their fashion as a Bruegel or Bellini. Included is an early 17th-century Moghul Indian painting, Son’s Lamentation at His Father’s Funeral, one of the few artifacts by a female artist, Sahifa Banu. 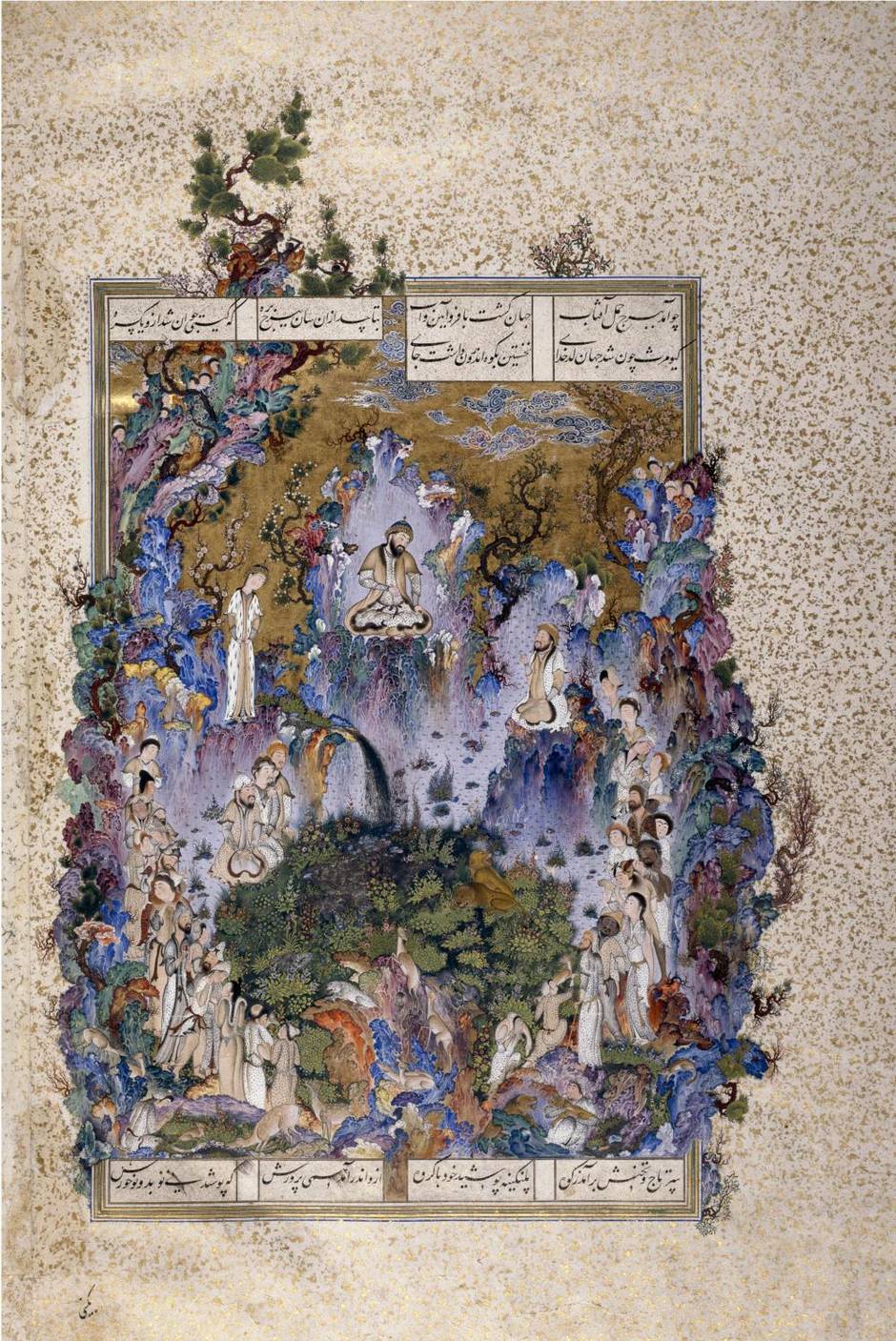 The Court of Keyomars is attributed to the 16th-century Iranian artist Soltan Mohammad. (Aga Khan Museum)

Another temporary exhibition, The Garden of Ideas, features work – in printmaking, video, rug-making and miniature painting, among other idioms – of six contemporary Pakistani artists. Assembled by the Sri Lankan curator Sharmini Pereira, the show’s a clear signal that the Aga Khan is not going to be just historical in focus, that Islamic art has both a present and a future. It’s also a riposte of sorts to the commonly held conception of Pakistan as “the most dangerous place in the world” where the only growth industry is jihadism.

The most famous of the six Pakistanis is Imran Qureshi, the Lahore-based miniature painter and teacher. Not only does Qureshi, 42, have nine gouaches on handmade paper hanging in The Garden of Ideas, he got the okay to paint, in acrylic and latex, a large site-specific work on the museum grounds. Titled The Garden Within, its roiling, predominantly green landscape of vegetal forms on cement recalls the huge, red-splattered installation Qureshi did last year on the rooftop garden of New York’s Metropolitan Museum of Art. To these eyes, though, the most eye-popping contemporary work is found inside the museum, just outside the entrance to the main-floor gallery. Part tapestry, part sculpture, Your Way Begins on the Other Side by Aisha Khalid, another 42-year-old Lahorean, hangs more than six metres; one side, with its rich patterns and images of lions, leopards, dragons and deer, riffs on the Safavid carpets of 16th-century Persia, the other is a “lawn” made up of more than a million densely packed, brightly coloured metal pins.