The President's assassination and the events surrounding it have been a fount of inspiration for artists (and 'artists') of all stripes in the past five decades. Herewith some examples of their insinuation into the warp and woof of popular culture 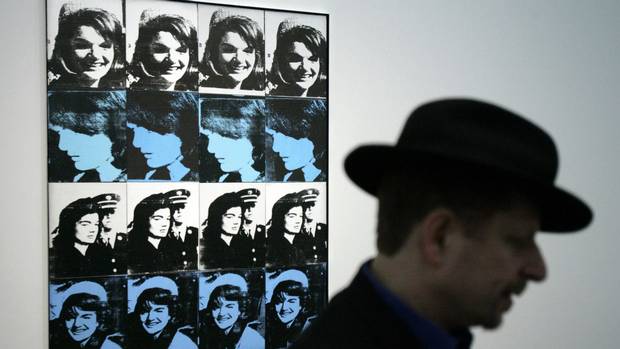 (1964) Andy Warhol. The artist began a series of acrylic and silkscreen paintings of a grieving Jacqueline Kennedy shortly after her husband’s assassination, continuing through 1965. Warhol claimed he was “thrilled” to have JFK as president “but it didn’t bother me when he was dead. What bothered me was the way the TV and radio were programming everybody to be so sad.” 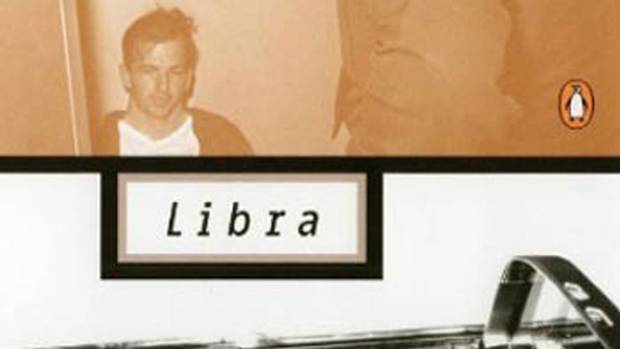 (1988) Don DeLillo. A paranoiac flight of fact-fuelled fancy and probably the greatest novel to come out of the assassination. Mostly a “biography” of Lee Harvey Oswald, it’s a potent distillation of the dread, ambiguity and instability that have informed the psychic landscape of the post-Kennedy era where, as The New York Times’ Anthony DeCurtis puts it, “the past refuses to dissolve safely into memory and instead exerts a pull one can never fully escape.” 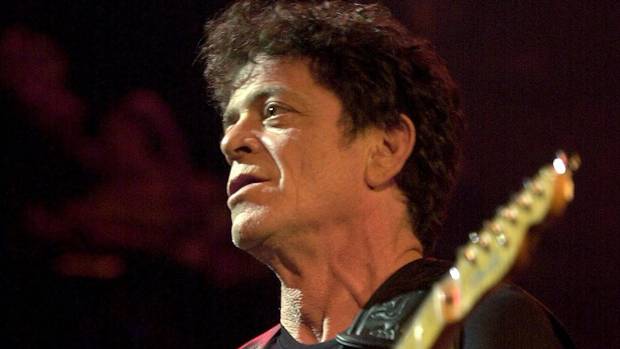 (1982) Lou Reed. Reed’s reputation as a brusque bruiser is belied by this stately, moving ode in which he recalls where he was when he heard the news of the Dallas shooting (“I was upstate in a bar”) and the event’s lingering effects (“I dreamed the perfect union, and a perfect law, undenied/And most of all I dreamed I forgot the day John Kennedy died”). 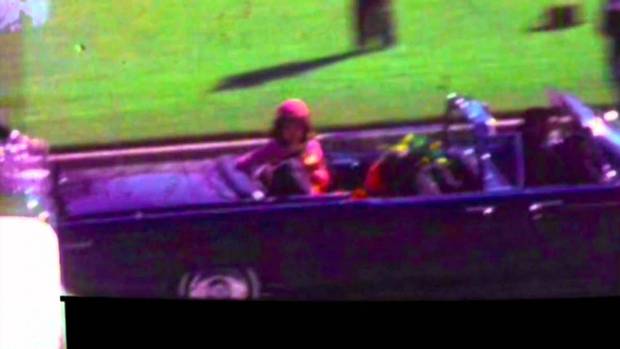 (1963) Abraham Zapruder. The world’s most famous (and influential) 8-mm home movie. Hypnotic in its can’t-watch/must-watch horror. The gasp-inducing high point of Oliver Stone’s JFK. The 26-second precedent-setter for the “convulsive beauty” of Bonnie and Clyde, The Wild Bunch, Taxi Driver and Scanners and … and … 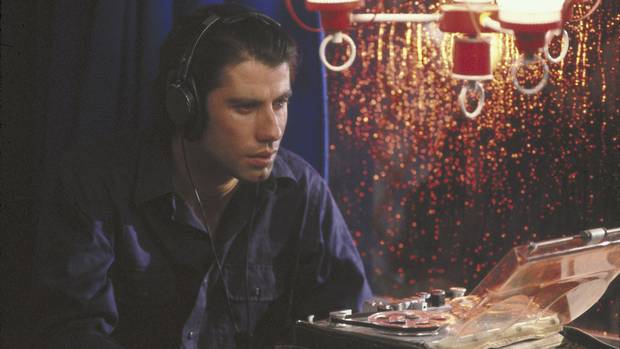 (1981) Brian De Palma. Films have feasted heartily on the assassination, using it as either direct inspiration or riff bait. Blow Out’s one fun, heady concatenation, at once a variation on Antonioni’s Blow-Up and an interpolation of the themes and events of JFK’s assassination with Ted Kennedy’s 1969 Golgotha at Chappaquidick. John Travolta stars as the Zapruder-like witness – except here it’s a microphone and tape-recorder, not a Bell & Howell camera, that make him one troubled man. 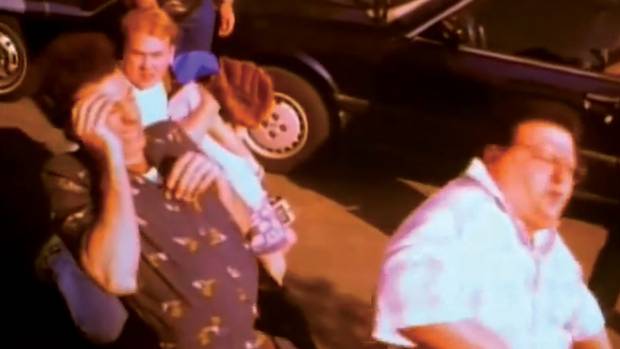 (1992) The Magic Loogie episode. The Kennedy assassination has attracted more conspiracy theories than flies to a pest strip, a phenomenon that went global with the 1991 release of JFK. This classic TV episode spoofs the Stone movie to hilarious effect while simultaneously debunking “the magic bullet theory” posited by the Warren Commission. Here, however, the trajectory in question is that of an expectoration by New York Mets pitcher Keith Hernandez. 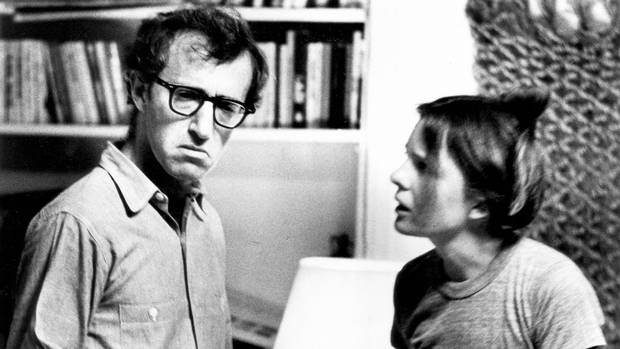 (1977) Woody Allen. As conspiracy theories gained traction, one of their tangential effects was to make the world a murky, sinister place where everything seems connected to everything else, even one’s sex life. In the movie Annie Hall, Allen’s Alvie Singer character says he can’t have sex with his wife because his obsession about the notion that the Warren Commission duped the American public and that Lee Harvey Oswald could not have acted alone are cramping his performance. 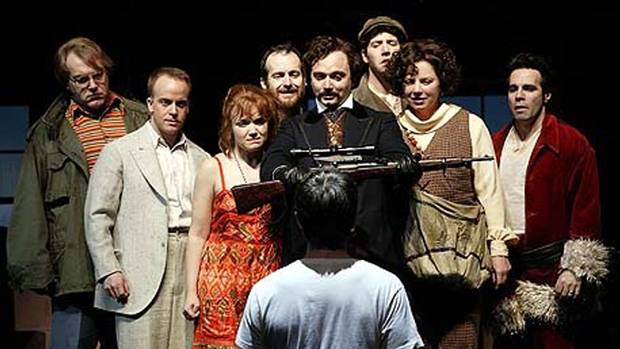 (1990) Stephen Sondheim/John Weidman. A phantasmagorical musical, mounted first off-Broadway, then on, peopled with a bevy of American assassins, failed and successful. In one scene, Lee Harvey Oswald is visited by John Wilkes Booth in Dallas’s Texas Schoolbook Depository, where Lincoln’s murderer cajoles him into achieving immortality by joining the brotherhood of history’s greatest assassins. No, it doesn’t have a song titled “Send in the Killers.” 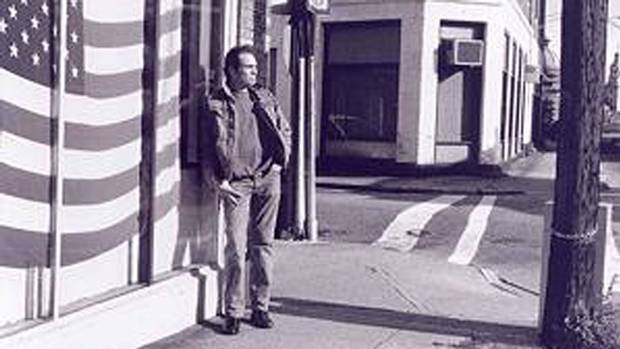 (2003) Eric Andersen. A half-spoken, half-sung kaleidoscopic re-creation from the creator of Thirsty Boots and Violets of Dawn of his Nov. 22, 1963. For 26 minutes, to a smoky jazz-inflected soundtrack, Andersen tells of being an aspiring 20-year-old singer in San Francisco, gassed to be hanging that day with such Beat legends as Allen Ginsberg, Lawrence Ferlinghetti and Neal Cassady yet trying to process the tragedy of Dallas. It’s a song of innocence and experience, of weed, wine, woe and wonder. 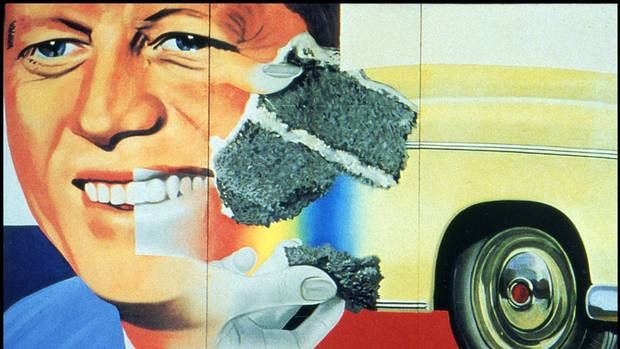 (1964) James Rosenquist. One of the progenitors of Pop Art, Rosenquist began this large painting shortly before Kennedy’s inauguration and finished it a year after his death. There’s hope and affection here (as well as the suggestion of JFK as one more capitalist comestible) but, post-assassination, it’s hard not to be disconcerted by those spongy fragments of cake coming from his head and the Chevrolet exiting the picture frame.