When we speak of a masterpiece, we speak of a work of art that has two characteristics. First, it reveals the artist at the top of his or her game, demonstrating the skills and sensitivities that most characterize that artist's way of seeing. Second, a masterpiece is a work that is profoundly of its times.

Thus we study Albrecht Durer's Self Portrait of 1500, in which the artist pictures himself gazing out at the viewer like a secular Christ, and see the reigns of religion loosening on Western consciousness, and a new age of humanism taking hold. We look at Andy Warhol's soup cans and see that the artist has captured both the seductive allure and the glossy false promises of post-war American capitalism, in which citizenship meant conscription into the new role as consumer. In the masterpiece, these meanings are compressed under the terrific force of imagination, like gemstones whose glittering brightness belies their muddy vegetable origins in lived experience.

Christian Marclay's 24-hour projection piece The Clock, which goes on view at Toronto's Power Plant this weekend, is that kind of gemstone. (The work is on loan from the National Gallery of Canada and the Museum of Fine Arts, Boston, which jointly acquired one of the five editioned copies of it last year.) The product of a research-and-editing marathon spanning three years and composed of more than 10,000 clips culled from every nook and cranny of film and television history, it embodies a feat of sustained vision achieved with extraordinary skill. The work is synched to real time – what you see on the big screen is the same time you see on your wristwatch – with each clip linked to the next in a seamless, exquisitely shaped montage rife with wit, drama and poignancy. Conventional narrative, though, has been shattered here, the stories broken in order that the bigger tale of our times may be told.

Watching, you're struck by the uncanny blurring between artifice (the work of art) and reality (your life as a busy museum-going person). The Clock seems to reach out and drag you into its lustrous, synthetic embrace, and you swoon into the fearfully complex unreality of it all, borne away on the deluge. Is this not our condition now, as we experience each other, and the world, more and more through a visual torrent of incoming data? Technologically privileged human beings are increasingly here and elsewhere simultaneously, our bodies trailing behind our Skypified brains like phantoms. Moments in time can be captured and sent airborne to take root elsewhere. The circadian rhythms of night and day are obscured by the dazzle of 24/7. As primates, we are confused. As clever primates, we are intrigued. We will push further.

When historians look back on The Clock 100 years from now, this is what they will see: a work of art that revels in life's hectic pace, in which myriad stimuli compete for the attention of the same old cognitive hardware (more or less) that served us as cave dwellers. They will see how we understood, in some nascent way, how cerebral experience was ramping up, displacing our more primitive connections to matter, time and space. They will see how we liked it. In every sense, this is a vision worth losing sleep over.

The Clock is at Power Plant until Nov. 25. Christian Marclay will discuss the work in conversation with Michael Snow at the Enwave Theatre on Nov. 5 at 7 pm. 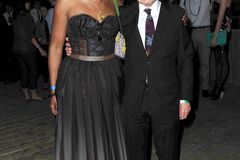 Get ready, Canada: The Clock is about to start ticking
February 8, 2012 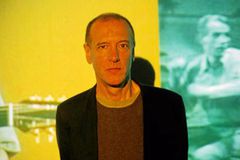 My 24 hours of watching The Clock
February 8, 2012
Winnipeg to host works from National Gallery
September 10, 2012 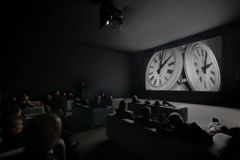