It’s a long escalator ride down to the concourse of the Verdun Metro, one of three subway stations within walking distance from my Montreal apartment. The place could be like a dungeon at that depth, but it’s flooded with natural light from a huge, high skylight. A row of six soaring concrete pillars complete the impression that one is standing in a sunken cathedral.

Montreal Metro stations feature surprising amounts of headroom and natural light, but none of them uses it in the same way. Most subways systems enforce strict design uniformity, but the 26 Metro stations that began accepting passengers 50 years ago this week all have a different architectural personality. This innovation abolished the numbing sameness of underground journeys elsewhere, where you’re plunged into a nowhere zone of placeless utility. Mass transit that doesn’t seek to punish the user: Is it any wonder Montrealers cherish their Metro? 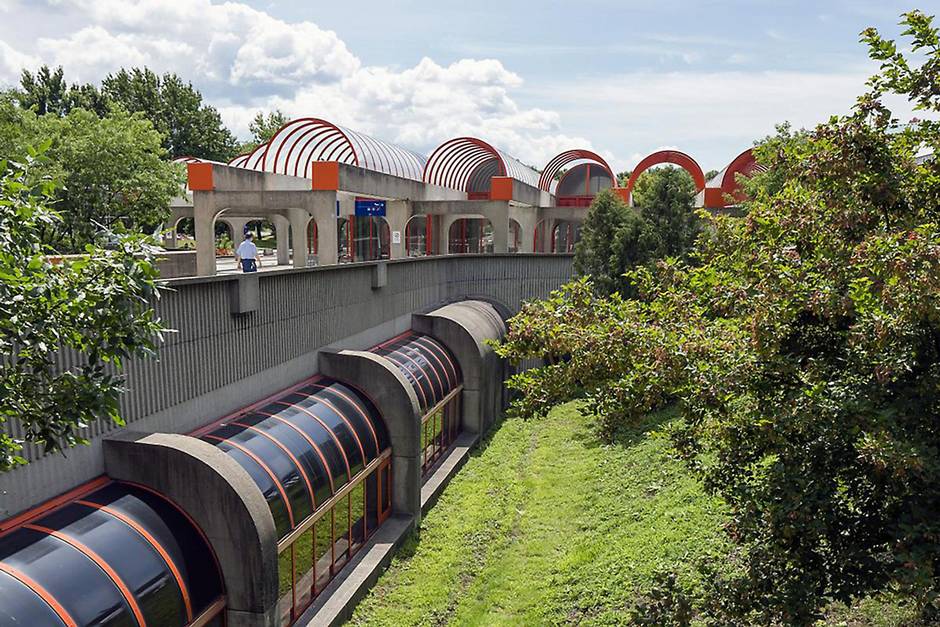 Brutalist architecture is prominent in Montreal’s Metro but the concrete forms are animated by curved arches and colourful elements. (Photos by the Montreal Transit Authority)

Metro love rose to the surface of public life last week, as all four Montreal dailies devoted major space to the 50th anniversary of the system, which now extends to four lines and 68 stations. Le Devoir commissioned short Metro narratives from Michel Tremblay and three other writers. L’Orchestre symphonique de Montréal began rehearsing two new Metro-related pieces that premiered at Maison symphonique on Thursday, and will be heard there again on Saturday and Sunday.

New York’s subway also bears the burden of decades of sweaty-palmed depictions in inner-city crime movies. Subway depictions in the cinema of la francophonie tend to be more glamorous, the exemplar being Luc Besson’s 1985 comedy-drama, Subway. Montreal’s imaginative connection to the Paris system is tangibly represented by the Art Nouveau Métropolitain entrance to Square-Victoria-OACI station. 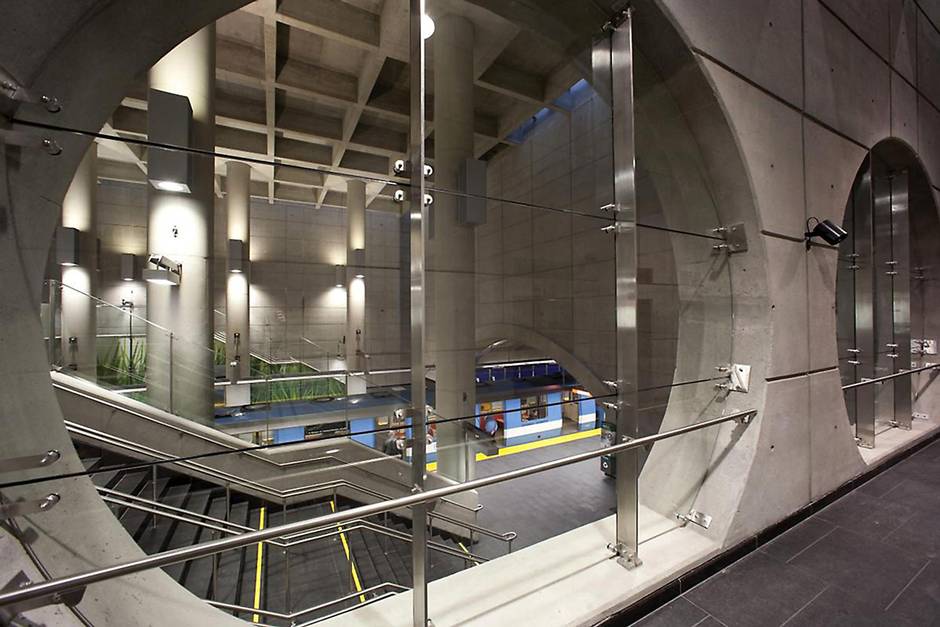 The Montreal Metro exerts a poetic appeal not shared by systems in Toronto and New York.

The Montreal Metro was born during the same burst of civic ambition as Expo 67. Rock dug out for the tunnels was used to create sites for the fair, on the bulked-up Île Sainte-Hélène and the newly created Île Notre-Dame. A second wave of station-building began around the time of the 1976 Olympics, and extended through the late 1980s. Three more stations were added at Laval in 2007, including the stunning postmodern commuter palace at de la Concorde.

Like Expo, the Metro was held up as a sign of Montreal’s coming of age as a modern city. The subway system’s expression of modernity is often Brutalist in design, at Verdun and at least a dozen other stations. But unlike some street-level manifestations, Metro Brutalism doesn’t seek to overwhelm the observer. More often than not, massed concrete forms are animated by curved arches, angled beams, and geometric patterns in bas-relief, as well as by colourful platform elements. It’s as if the various architects had competed to see who could best humanize a potentially arrogant style. Their task was made simpler by the fact that Metro Brutalism is almost all container – there’s no hulking edifice to cast a menacing shadow over street and passersby.

Current perception of the stations is also helped by the fact that Brutalism has become cool again, and even domesticated. Polished concrete floors and raw concrete ceilings are routine elements in recent condo design. 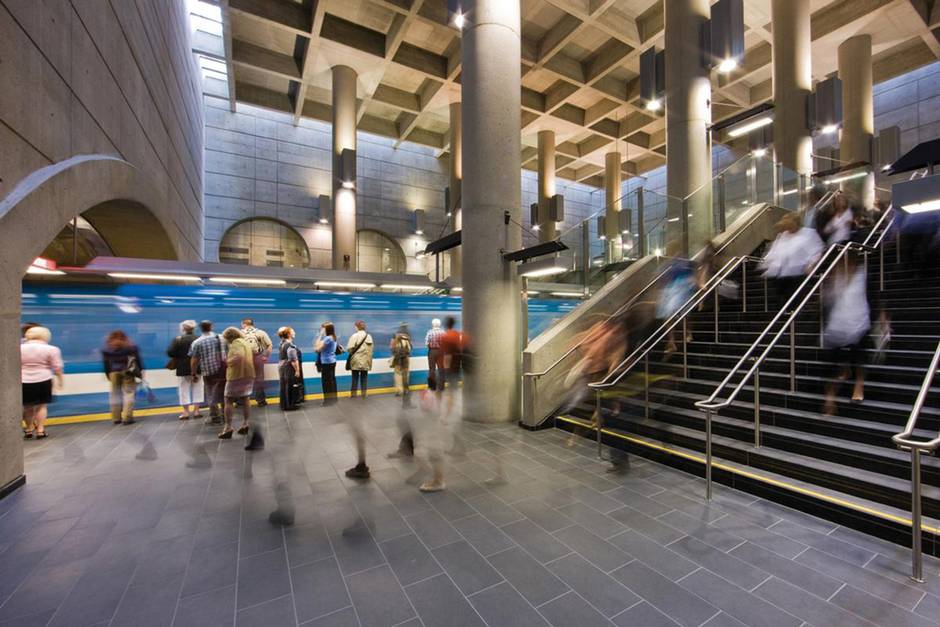 The cinema apotheosis of Metro Brutalism is Trevor Cawood’s playful short film, Terminus. It was made in 2007, but the look is very late 1970s, from the checked wide-legged trousers of the protagonist to the stations through which he tries to escape a Brutalist concrete man. You’re never quite sure whether this faceless dancing giant, made of concrete cylinders in stop-motion animation, is stalking the man or just trying to be friends. He objectifies the ambivalence many people feel toward concrete structures in general, and overbearing ones in particular. He also looks like a reference to the two towering bronze sculptures at Monk station – some of the 106 works of art spread throughout the system.

The sound of the system is distinctive because of the rubber train tires, and the rising open intervals heard when the train leaves the station. Some of those sounds will show up in Robert Normandeau’s electro-acoustic piece Tunnel Azur, one of two Metro-related pieces commissioned by the OSM. The other is José Evangelista’s Accelerando, a piece for classical-sized orchestra focused on the rushing increase of speed known to everyone who steps on a Metro train. “It’s just a point of departure,” literally and figuratively, he says. He’s after an abstract “image of modernity” that refers to the Metro without trying to be realistic.

One aspect of the Metro that isn’t nearly modern enough is the naming of stations. Some are named after nearby streets or other features – Place des Arts and du Collège, for instance – but most commemorate individuals, from former Governor-General Georges Vanier to Lucien L’Allier, the public works engineer who oversaw early construction of the system. There’s only one woman named in the whole crowd: Queen Victoria, though in this case the reference is not to the monarch herself, but to the public square named after her. If these stations are going to continue to honour actual people, surely it’s time to start acknowledging the huge contributions of Quebec women.