I was at the beach on the weekend, in the haze of this end-of-the-world nuclear autumn, and girls were in their tiny bikinis and boys were all oiled and hairless, throwing their Frisbees into the smog. I encourage such exhibitionism, especially under the threat of Armageddon: It seems like evidence of a friendly and free world. But there is something faintly frightening about this balminess – as if climate change has dumped a tub of radioactive butter over the frenzied city – and maybe that is why I am seeing everything as toxic.

While the boys played, the girls took pictures of themselves. Then they typed on their phones for a few minutes – I figured they were posting those pictures – and then they took some more pictures. That is what one does at the beach.

I am not bothered by vanity or sexual competition. We all want to be popular and attractive and I am not one to promote a pious frumpiness. My problem is an artistic one: On my Toronto beach, on which beautiful representatives of pretty much every ethnicity in the entire world were taking sexy selfies of themselves, every single one was making the same face. You know the face, a pretty face, a smiling face, a coy face, with the same duck lips and the head turned slightly to one side. The idea was not to take a picture of oneself, but to turn oneself into a kind of universal picture of prettiness.

The idea was to eliminate variation. It was not so much to present the self as to replace the self with a popular mask. It is the kind of exhibitionism that becomes perfect anonymity.

This summer I saw the show at the Saatchi Gallery in London called From Selfie to Self-Expression. It juxtaposed self-portraiture from the history of painting with contemporary phone shots, paparazzi celebrity photography and highbrow cerebral artwork about the nature of mirrors and surveillance. One room forced visitors into an acute awareness of their constant surveillance (an issue in London especially, where closed-circuit cameras monitor every inch of sidewalk): Patrons saw giant images of themselves as seen from above, with cryptic metadata swirling around it, projected onto giant walls.

One sculpture created an uncanny pop-culture hall-of-mirrors: Pop, by Gavin Turk, is a life-size waxwork of the artist dressed as Sid Vicious, in the pose of Andy Warhol's Elvis Presley. Wrap your head around the Baudrillardian brilliance of that for a second.

Another seductive and creepy moving sculpture inscribed the silhouette of anyone standing in front of it into a wall of pulsating black-and white fur tufts (PomPom Mirror by Daniel Rozin). It turned you into a sweater.

This show was lambasted by a couple of British critics when it opened last March because it was sponsored by a giant mobile-phone company (Huawei) and they said it was nothing but a giant ad. This, I think, was unfair, as there was so much interesting stuff in it, but the critics did convincingly point out that there is a problem in equating a phone snap made for purposes of self-promotion with an oil painting that took a month to complete.

It is true that cerebral contemporary artists such as Tracey Emin and Juno Calypso use the selfie paradigm to make self-conscious and socially critical work. The genre can be serious.

But there is still a difference between the artwork that seems to be actually looking at oneself or at the medium and the self-shot whose function is to want to present a socially presentable facade. Artists have always used their own faces for exploration of two kinds: technical and psychological. Both craft and introspection are involved. But people snapping sexy selfies don't really want to look very different from pictures in advertising and they certainly don't want to reveal intimate truths about themselves.

A melancholy little interview in The New York Times this week underlined this distinction. Ann Temkin, chief curator of painting at the Museum of Modern Art in New York, very politely complained to a reporter about the massive popularity of one of the most famous paintings in her collection: Starry Night, by Vincent van Gogh.

She doesn't mind that vast crowds of people come to see the canvas every summer – what she minds is that they are only there to take selfies of themselves with it. They stand with their backs to the picture, snap their smiling faces in the frame, then move on. They have accomplished the task of visiting the painting, have documented the encounter and are ready to go on to the next monument.

"It's as if taking a photo of a work in a museum means 'seeing' it to a viewer," Temkin told the newspaper, "even though someone like me worries that taking the photo replaces seeing it in the slow and thoughtful way I would ideally wish."

What a contemporary paradox: We like to say that the current culture is a visual one, one in which image is ubiquitous and far more powerful than text. It is a culture of looking. And here is a curator of images saying that the problem is that no one is looking.

On my last night in London, I went to a club where every patron's photo ID was scanned and recorded on entry. The bouncers showed you, on a screen, the picture of your face that they were keeping on their servers, before they let you in. It felt like an episode of Black Mirror. It felt like some clever artwork about the oppressive power of all the pictures of our own faces. The bouncers hardly glanced at me, of course; they didn't have to see me. 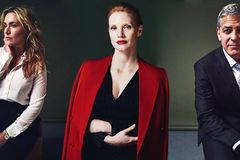