There's been an explosion of visual-arts awards in Canada in the last few years, so the RBC Canadian Painting Competition, marking its 15th anniversary this fall, can pride itself on being one of the older kids on the block. This year's winner and two runners-up, chosen by a nine-member jury of curators, dealers, artists and critics, are to be named Oct. 2 at a gala in the National Gallery in Ottawa.

The prize actually started in 1998 as the Canadian Emerging Artist Prize, with a focus on Toronto artists, co-sponsored by Connor Clark Private Trust and the Canadian Art Foundation, publisher of Canadian Art magazine. The competition began its march to its current incarnation as a national prize the next year when RBC Investments purchased Connor Clark and, as part of the deal, agreed to continue the prize as the RBC Canadian Painting Competition. For its first two years under RBC auspices, though, the prize was open only to Ontario artists.

Since then the competition, while always focused on recognizing young, rising talent, has undergone several tweaks and refinements. Between 2001 and 2003, for instance, there was no overall national winner, as there is now; instead, a laureate was named from each of the three regions RBC divides the country into (Eastern, Central, Western), and awarded $5,000. Then as now, five finalists were selected from each region. In 2005, RBC hiked its top purse to $25,000 from $10,000 while two runners-up each received $15,000 (from $7,000). That money remains the same this year but because it's the 15th anniversary, the remaining 12 finalists will each receive $5,000, for a total purse of $115,000. As ever, the winning painting and those of the two runners-up becomes part of the bank's permanent collection, now numbering some 4,000 works.

The Globe and Mail recently asked four previous national winners to reflect on the prize and what it's meant to their careers:

Montrealer Alexis Lavoie, now 32, participated in the competition in 2010, two years after earning a BFA from the University of Quebec at Montreal. One of more than 600 artists who entered that year's contest, Lavoie says at the time he wasn't aware "how big a deal the prize was"; it was only after being named a finalist and travelling to Toronto's Power Plant for the awards ceremony that "with all the media, I got kind of nervous."

Today Lavoie works every second weekend as a janitor in a hospital but since taking the RBC he's been "painting a lot more and working a lot less." Lavoie used his prize earnings to take a break from working "for a full year to concentrate only on my painting."

Already represented by gallerists in Montreal and Quebec City when named RBC laureate, Lavoie post-prize proceeded to "get more shows, especially in Quebec, and I sold more work." (Simon Blais, one of the nine RBC judges in 2010, is now Lavoie's Montreal dealer after Lavoie's original gallery folded in 2011) While he still lacks a Toronto dealer ("Quebec, Canada, it's like two separate worlds, y'know?"), Lavoie participated in a well-received duo show with fellow Montrealer David Lafrance in 2011 at Toronto's KWT Contemporary and in late 2010, Toronto Life named him "one of 10 artists first-time buyers should invest in now."

Lavoie admits winning the RBC gave him pause about how to proceed with his art. "That painting that won [Restants], I think it's a really good painting. But afterwards I thought, 'Maybe people will now like to see the same thing.' This was something I had to fight a little bit." Winning, too, was "stressful" because "I am a bit shy, [but] it did help me feel more confident going through that."

Jeremy Hof was 30 and just a year out of Vancouver's Emily Carr University of Art + Design when he won $25,000 as the top RBC laureate for 2008. Entering the competition had long been a goal not because "I was thinking, 'Oh, I'm going to win this right after graduation,' but because it was a really easy application process – it doesn't cost anything – and there really was nothing to lose."

Taking the top prize allowed Hof to pay some bills, boost his savings account and take a European vacation. However, its real value was the "validation" it afforded him as an artist. It "heightened my national exposure" and, in its wake, resulted in a "pretty extensive touring schedule," including exhibitions in eight institutions across the country.

Hof is represented by a well-connected dealer, Toronto's Jessica Bradley, former curator of contemporary art at the Art Gallery of Ontario, but at a time when a typical artist's gross annual income is just over $25,000, he holds down a part-time job, as a studio assistant for a senior Vancouver artist, "that keeps paying my bills in-between any potential art money." Five years on, the RBC win "is still present on people's radar. It's not my only claim to fame but it's definitely part of my ethos, what people know me as.

"I wouldn't say [the win] changed my practice at all," he added. "I personally have never felt any pressure like that…. I know you could easily say, 'Oh, I won the RBC with this kind of painting; I've got to be that guy.' But I almost specifically said I'm not going to do that. I like to think my greatest hit hasn't been written – or painted – yet."

Graduating from Ontario College of Art and Design University in 2010, Torontonian Vanessa Maltese was named the RBC national winner two years later. At 25, painting isn't her only medium, she's a sculptor, too. In fact, there's a sculptural or built quality to many of her paintings, including Balaclava, the modest-sized oil on panel that won her the 2012 RBC. "Each medium informs the other," she notes, to the point not long ago that she was building sculptures, "then making still-life paintings of them."

Raised in Newmarket, Ont., Maltese scored her first solo show, with Toronto's Erin Stump Projects, a year before she entered the painting competition but recently she decided she wants to explore "other avenues" and is no longer exclusively working for ESP.

Being an RBC laureate "has helped introduce me to artists from other cities across Canada," she says. (Last June she was part of a group show at Vancouver's Wil Aballe Art Projects that included fellow RBC winner Jeremy Hof.) "The level of promotion and type of exposure the competition provides is different from what I was used to, being involved almost exclusively in the Toronto arts community."

For Maltese, her $25,000 win provided "a cushion to explore new methods of working" while allowing her to cut back on some of her part-time jobs (one of which was working at the Art Gallery of Ontario gift shop) to spend more time in her studio.

Jamaican-born, Toronto-bred Dionne Simpson has the distinction of being the first national winner of the RBC competition, taking the top prize, then worth $10,000, in 2004, when she was 29. It was a case of third-time lucky for Dionne, who attended New York's Cooper Union School for the Advancement of Science and Art in the late nineties before graduating from the Ontario College of Art and Design in 2000.

"Although I believe in fate, I still love competing. There's a saying that Jamaicans often use: 'What's for you is for you.' This philosophy has helped me to enjoy my wins and be happy for others when I don't."

Since 2004, Simpson has been able to work pretty much full-time as an artist or in arts-related fields, participating in many solo and group shows, with gallery representation in Toronto, Vancouver and Calgary. Recently she took an arts and cultural programmer position at a youth shelter in Scarborough. She's perhaps best known for her shimmering, almost mosaic-like urban scenes (buildings, pedestrians). Adept at the West African art of thread-pulling, she strips fibres from the cross-weave of the canvas, then inserts sundry materials – liquid paper, paint, hair dye, gel, soil – into the gaps.

"The greatest impact that the win had on my career was the relationship I gained with RBC," she says. "[It's] really come through for me on many occasions over the past nine years. Example: I have a non-traditional studio loft which required a mortgage. Every bank turned me down except RBC. They recognized many artists have unconventional spaces and came through for me."

The National Gallery of Canada will exhibit the paintings of the 15 RBC finalists from Sept. 30 to Oct. 13; they will be on show at the Art Toronto international art fair Oct. 24-28. 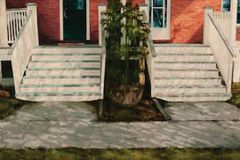 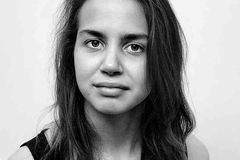 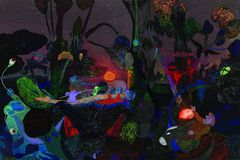