Call me Joey. Airplane!’s Captain Clarence Oveur likely would. Because I like movies about gladiators. Not as much, mind you, as I did at age 12 when I thought Spartacus, Barabbas, Demetrius and the Gladiators and their ilk were the quintessence of great cinema, and Victor Mature second only to Charlton Heston as the king of sword and sandals. Still, the interest, like the Dude, abides. Has there ever been a cooler and crueller culture than ancient Rome? 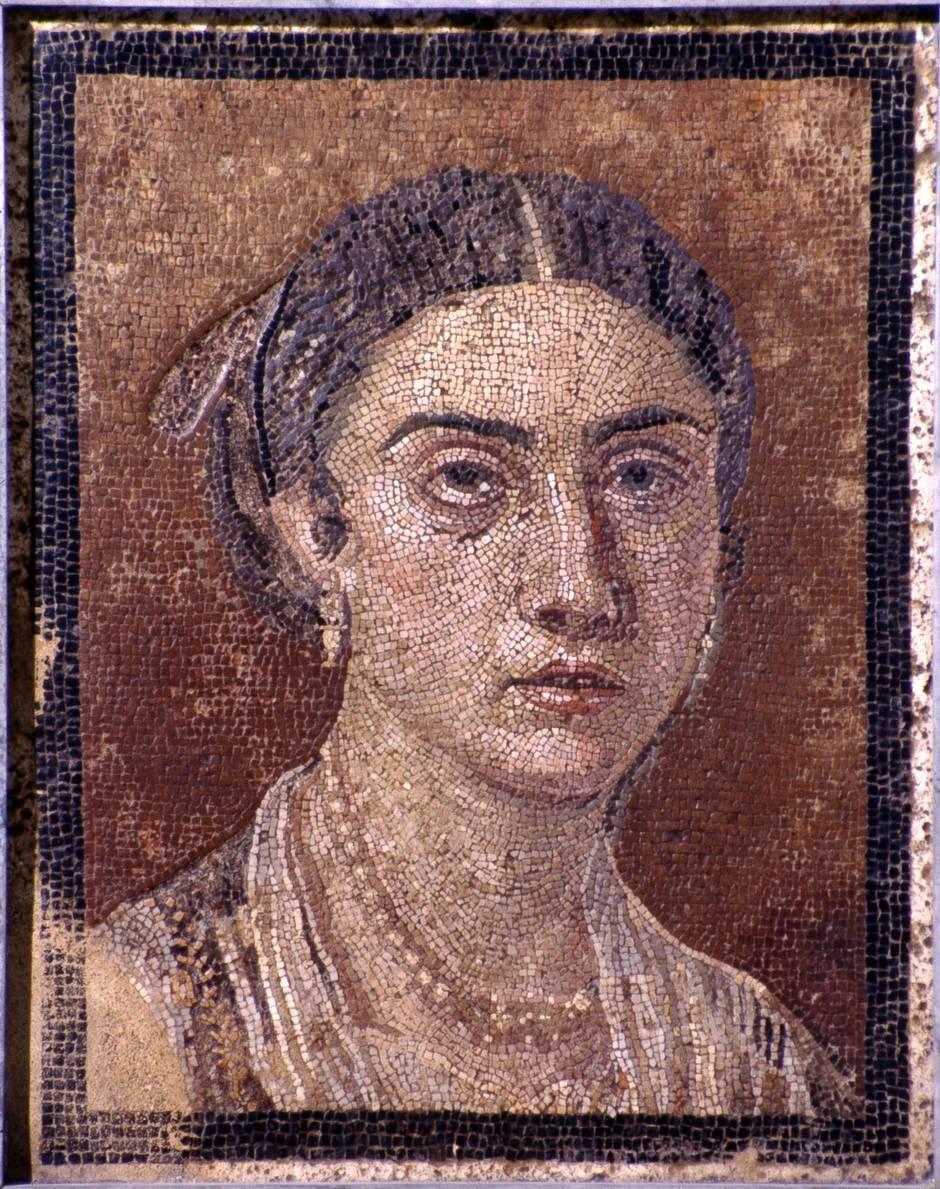 Portrait of a woman mosaic, part of the Royal Ontario Museums’s exhibit Pompeii: In the Shadow of the Volcano.

Naturally then, when the Royal Ontario Museum in Toronto announced earlier this year that, beginning mid-June, it would host for almost seven months an exhibition titled Pompeii: In the Shadow of the Volcano, attention had to be paid. Pompeii, you see, was a gladiator town. Gladiators trained there, lived in barracks nestled in the Bay of Naples on the slopes of Mount Vesuvius and fought, often against wild animals, in a huge amphitheatre erected in 70 BC. The ultimate accolade was to be sent up to Rome, 250 kilometres to the northwest, to slash and hack in the Colosseum.

As we all know, Pompeii’s combat culture (and much else) crashed and burned some time in the second half of 79 AD, when volcanic Vesuvius blew its top and buried the city and adjacent communities in a hail of ash, poisonous gas and stone. Thousands died (not, however, the entire population or even a majority of its citizens, as some movies and pulp literature would have it), mostly from extreme heat shock. But, luckily for posterity, all that ash and stone served to preserve the city as a sort of cryogenically sealed time capsule, ripe for the excavating. This started more or less systematically some 1,700 years later, in the mid-18th century, and continues to this day. Now an estimated 70 per cent of Pompeii has been cleared.

A triptych that is part of the Royal Ontario Museums’s exhibit Pompeii: In the Shadow of the Volcano.

It’s from these excavations that the ROM’s curatorial team, working in association with Italy’s Superintendence for the Archaeological Heritage of Naples and the Special Superintendence for Pompeii, Herculaneum and Stabiae, has culled some 200 artifacts to create the first big Pompeii show in Canada in at least 10 years. This often beautifully preserved stuff offers a condensed but nevertheless revelatory picture of life’s rich pageant in what most archeologists agree was “a relatively minor Roman city” made remarkable by the extraordinary circumstances of its demise. 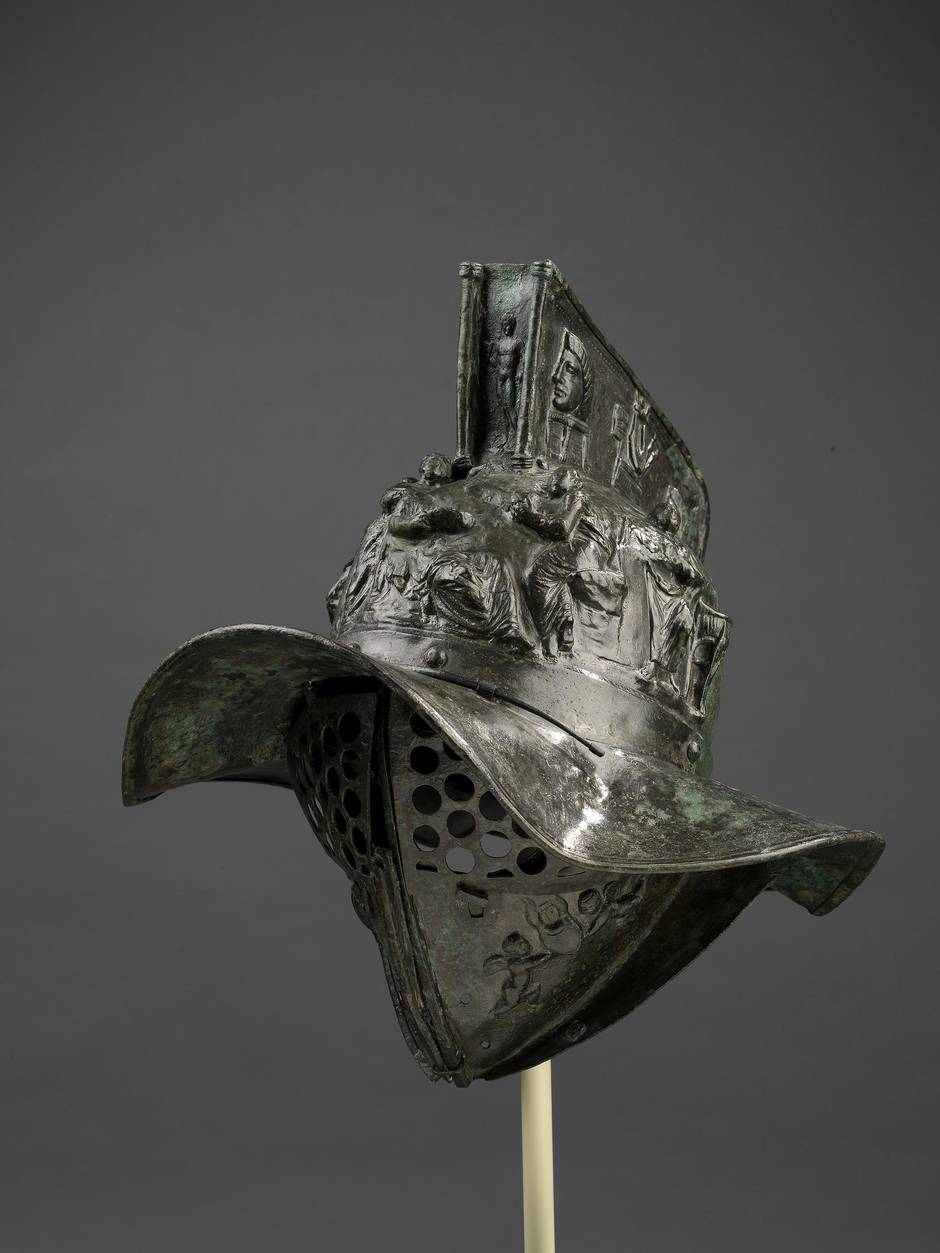 Gladiator helmet, part of the Royal Ontario Museums’s exhibit Pompeii: In the Shadow of the Volcano.

Gladiator buffs will be pleased to hear that early in the show there’s a fascinating display of combat wear – leg guards, shoulder “pads,” helmets and masks – that puts the heavy in heavy metal. (For what’s likely an even larger display of gladiator paraphernalia, buffs should probably check out Gladiators and the Colosseum: Death and Glory, on now at the Canadian War Museum in Ottawa through Sept. 7.)

Other highlights include a couple of arresting mosaics, one of a leashed family dog, tongue a-wagging, that’s as vivid as a Keith Haring drawing, the other of an unidentified aristocratic woman made from thousands of itty bits of coloured limestone, assembled with all the intricacy and care of a pointillist painting. For sheer visual pow, there is, near the exhibition’s exit, an almost monumental bronze statue, found by a garden pool in a villa in nearby Herculaneum, of a young female, eyes made of glass, frozen in the act of fastening her dress. For cheek (and for some perhaps, chic), check out the groaningly titled “Sex in the City” section where, courtesy of an array of amatory artifacts, you’ll discover the real roots of “phallocentrism.”

In other words, Pompeii: In the Shadow of the Volcano doesn’t lack the goods, be they exotic (a selection of copies of the famous plaster casts of the entombed victims) or everyday (pans, urns, furniture, lamps, coins, spoons). Where it does falter is in the presentation. 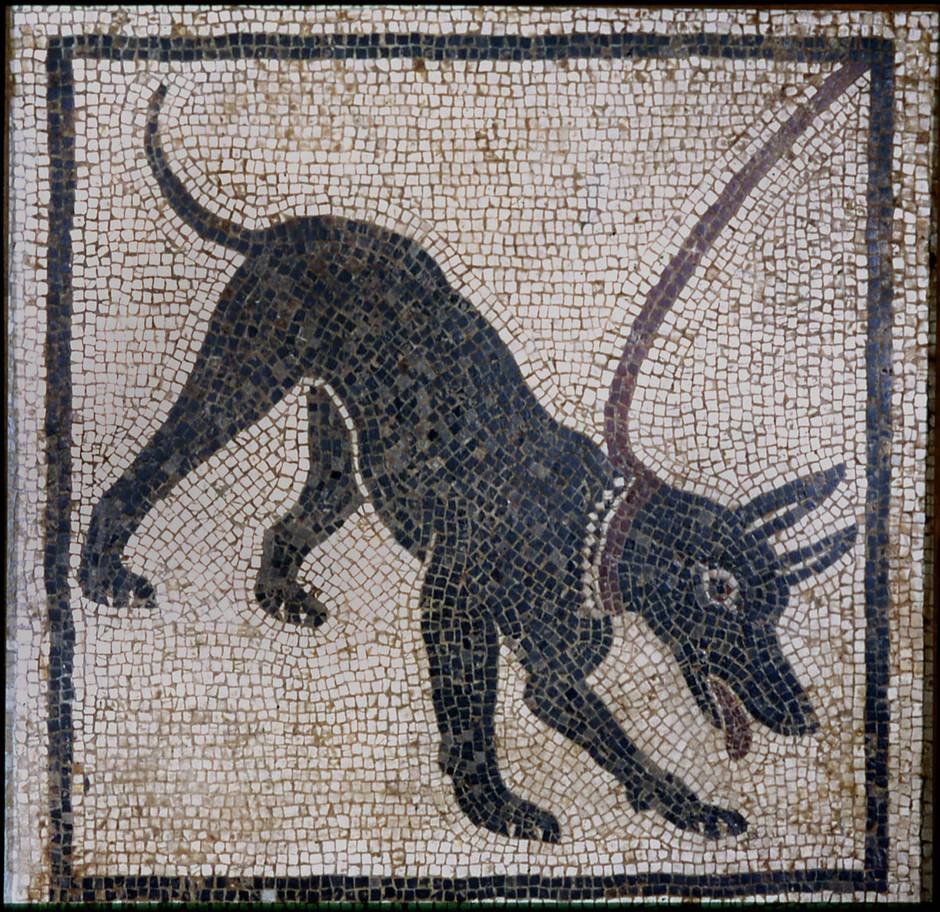 Mosaic of a guard dog, part of the Royal Ontario Museums’s exhibit Pompeii: In the Shadow of the Volcano.

This has less to do with the show’s organization as a warren of compartments and departments (with titles such as “Better Homes and Villas” and “Out on the Town”) than its setting. As regular visitors to the ROM’s lower depths know, the Garfield Weston Exhibition Hall can be an unforgiving space. Its vertiginous walls, linoleum-like floors, thrusting supports and angled intrusions are, more often than not, obstacles to be overcome (or at least ameliorated) rather than opportunities to be embraced. Previously, in big temporary shows such asMesopotamia (2013) and 2014’s Forbidden City, the ROM successfully mitigated the Weston’s difficulties. Not so here. The lighting is bland, the mise en scène antiseptic and bereft of atmosphere, the interactive elements pedestrian (“Wear a toga!” “Make a mosaic!” “Lift the amphora!”). In short, there’s no drama; it never gets its groove on. Indeed, the exhibition’s preparators have striven so hard to demonstrate the contemporary relevance of the ancient Romans that Pompeii finally feels as if it’s a trip to a road show in a shopping mall, not a rich museological journey to the otherness of the past.

Pompeii: In the Shadow of the Volcano appears at Toronto’s Royal Ontario Museum through Jan. 3, 2016 (rom.on.ca). A version of the exhibition, titled Pompeii: A Roman City, will run Feb. 7 to Sept. 5, 2016, at the Montreal Museum of Fine Arts (mbam.qc.ca).