Vancouver rockers Chilliwack always got a big cheer in concert when lead singer Bill Henderson would croon this line from the hit Raino: “If there’s no audience, there just ain’t no show.”

Just so, Bill, just so! But the inverse equally pertains, as two new and related exhibitions in Toronto, at the Art Gallery of Ontario and the Ryerson Image Centre, demonstrate. Titled, respectively, Fan the Flames: Queer Positions in Photography and What It Means to Be Seen: Photography and Queer Visibility, they’re making their bows just as the Ontario capital assumes its duties as the first North American city to host WorldPride (through June 29).

Nearly 18 months in the preparation and assembly, both exhibitions – the AGO installation runs through Sept. 7, the RIC until Aug. 24 – are the realization of the vision of Sophie Hackett, the AGO’s associate curator of photography.

The RIC presentation – drawn largely from the collections of the Canadian Lesbian & Gay Archives, the International Center of Photography in New York and the Image Centre’s own resources – is the more socio-historical/documentarian of the two. The 50 or so installations at the AGO, culled from about 20 collections, is more lyrical, idiosyncratic, diverse – “artistic,” in short – with a focus on individual identity and expression, in life and art-making.

Yet together and separately, each demonstrates the values of context and validation that only a significant public institution can bring to issues, events, a person, a community. A 1945 photograph of a transvestite, a picture-album of Fire Island habitués in the 1960s, a video of gender-transitioning in the early 21st century are all well and good as artifacts of witness and sensibility. But without the widespread visibility and considered (and considerate) presentation afforded by an AGO or an RIC, their potential as a source of education, affirmation and consolation is severely circumscribed.

The Globe and Mail asked Hackett to pick five things from the two shows she has curated – three from the AGO, two from the RIC – that resonate with her and that, in some way, distill or embody the scope of their respective ambitions. (Some of her responses have been edited and condensed.) 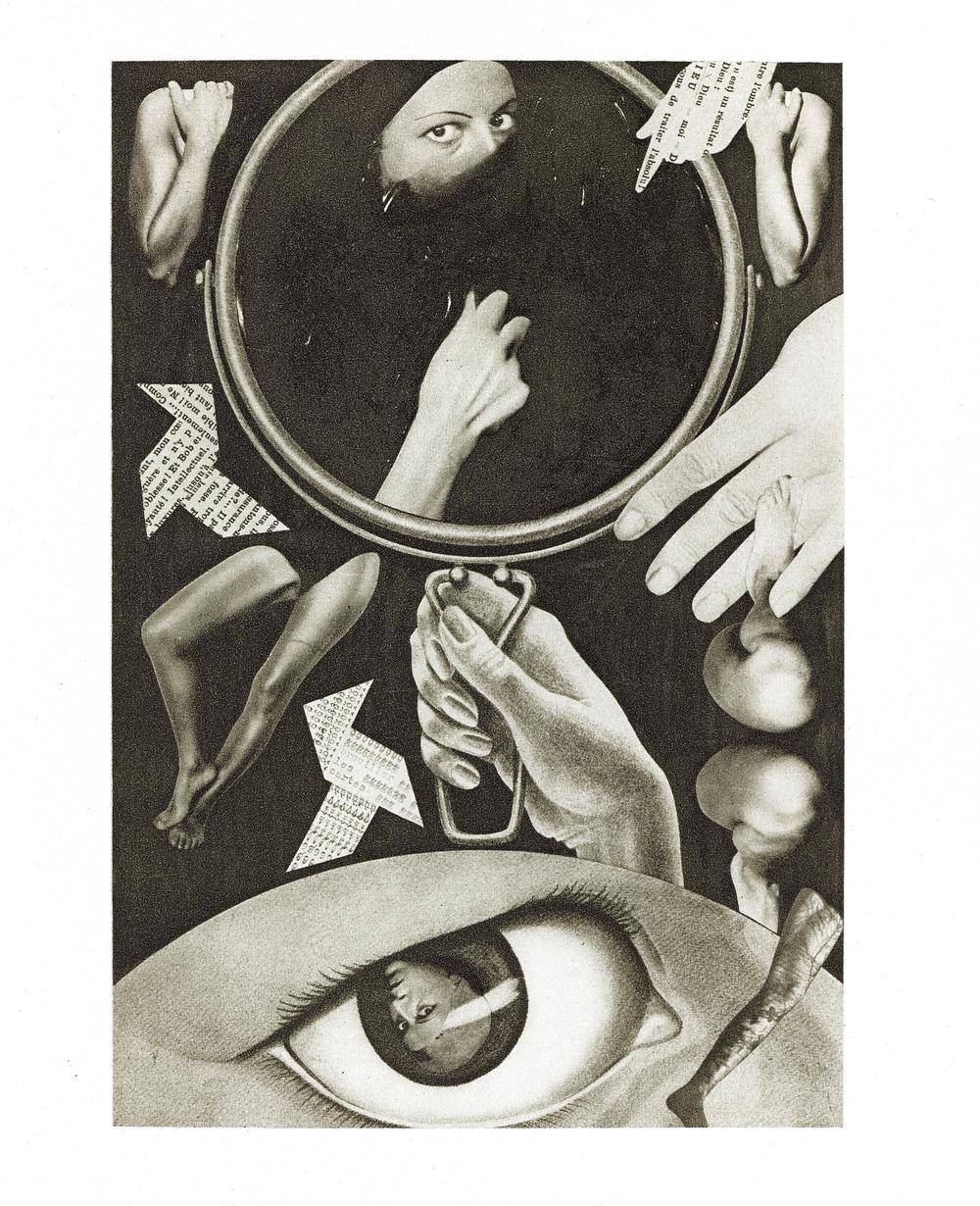 “The object that for me is so meaningful and significant is actually a very recent acquisition for the AGO, namely the book that Claude Cahun (1896-1954) and Marcel Moore (1892-1972) did, Aveux non avenus, usually translated as either Disavowals or Cancelled Confessions.” Published in 1930 in an edition of only 500, it’s part autobiography, part manifesto, part essay, part poetry, with 10 photo-collages. “Under this mask another mask. I’ll never finish removing all these faces,” Cahun, born Lucy Schwob, writes at one point. Sometimes described as “Cindy Sherman before Cindy Sherman,” Cahun was “such a front-runner” in “challenging traditional gender norms,” in her approach to “identity as performance, self-portraiture, staging,” Hackett said. (At the AGO) 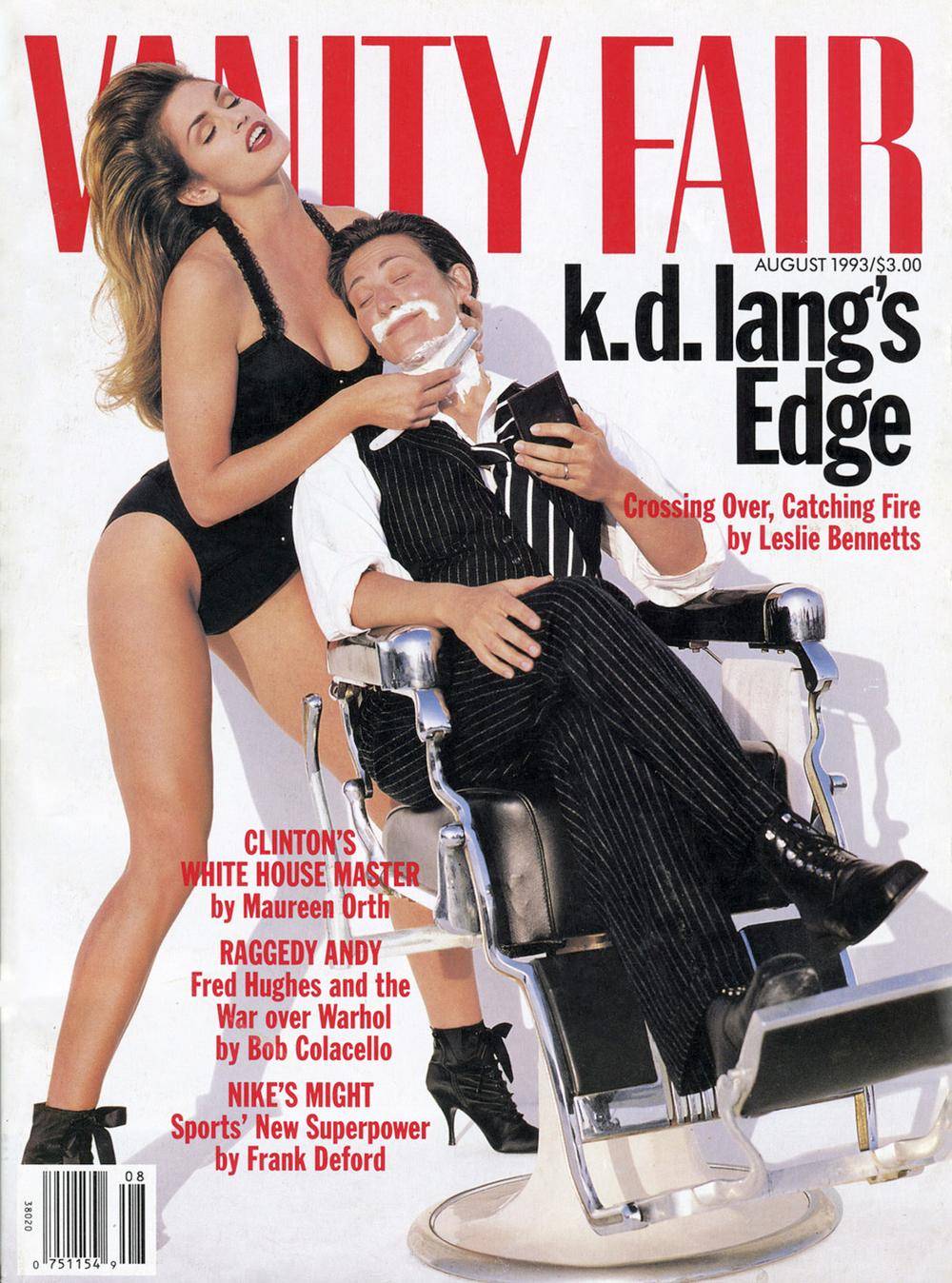 “They both speak of a certain glamour, I guess. What I love about the Ritts is how playful it is, how sexy it is, how provocative. And seeing a queer woman depicted on the front cover of such a major magazine was a landmark moment. You sort of feel at home in the world in a different way when you see a picture like that, that was so widely circulated,” Hackett said. “It was a moment of media visibility that wasn’t there before. Nan Goldin [born in 1953] is a figure along with so many others who helped make that Herb Ritts picture possible. [Ritts died of AIDS at age 50 in 2002.] Although the picture of Cody is from 1991, she’d been making pictures of drag queens and cross-dressers for decades prior to that. Her empathy and friendship and the way she photographed her own circle made that sense of community seem important. You could see her as an outgrowth of the ‘concerned photographers’ of the 1950s, ’60s, early ’70s, where you’d immerse yourself in an environment. Except, of course, she was legitimately of that environment, photographing her peers and friends, so the images have that documentary/diaristic feel.” (At the AGO) 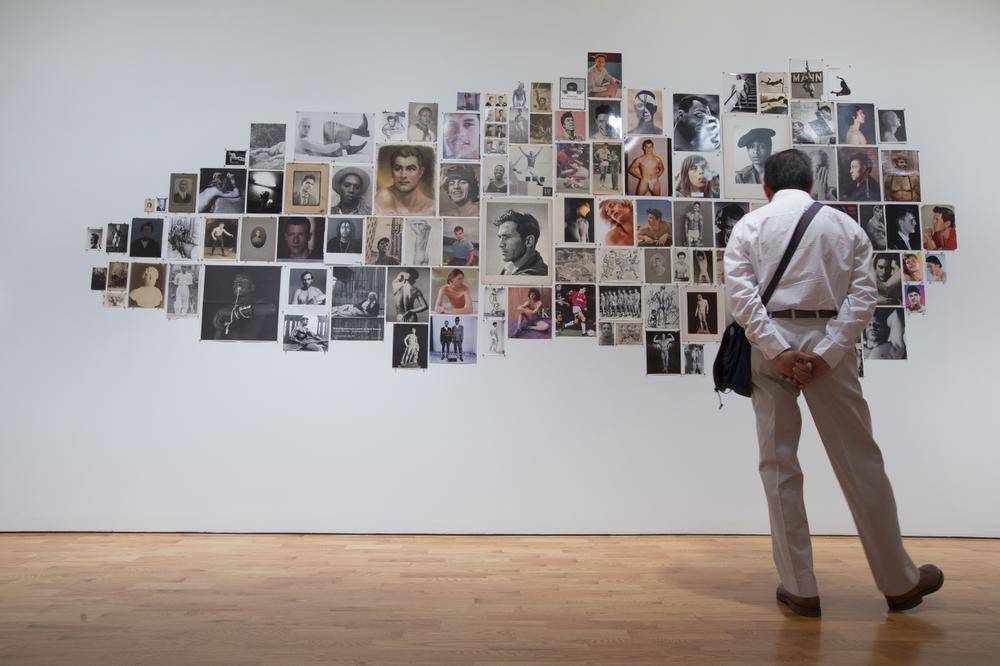 Images from the collection of Vince Aletti adorn a wall at the Art Gallery of Onttario. (Peter Power for The Globe and Mail)

Vince Aletti’s constellation of male imagery, torn mostly from magazines and newspapers, the photographs pinned to the wall.

New York-based Aletti, 69, has written extensively about photography for Aperture and the New Yorker and is famous for his massive collection of fashion periodicals and male physique magazines from the 1940s, ’50s and ’60s, with titles such as Demi-Gods, Trim and Grecian Guild Pictorial. The constellation includes Ritts’ portrait of Mark Wahlberg for Calvin Klein underwear, a Richard Avedon photograph of Rudolf Nureyev, plus work by Walker Evans, Steven Meisel, Peter Hujar, Ryan McGinley, Steven Klein, among others. “The resonance for me is [Aletti’s] sensibility coming through the collecting impulse, but it’s a queer sensibility,” Hackett said. “There’s this balance or mix of the expected and the unexpected, this back-and-forth between one man’s view and the culture at large. It’s a record of someone who has been a professional looker for many years, evidence of what has sustained that gaze and how it’s been honed.” (At the AGO) 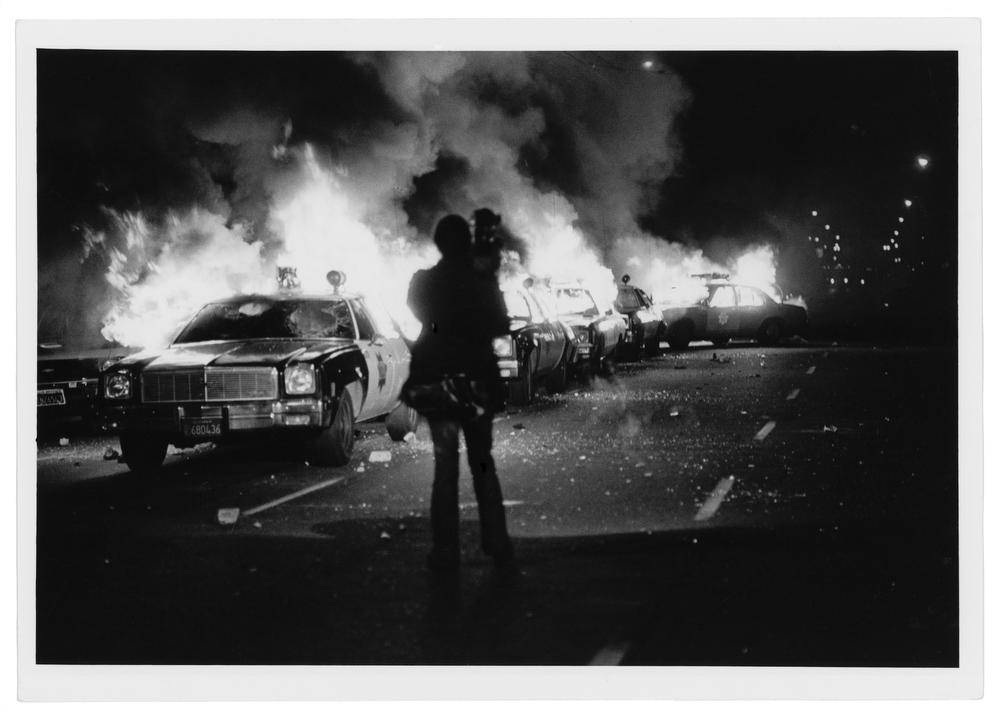 “I’m very taken by Eric Stein’s images of the so-called gay revolt in San Francisco in 1979 [prompted by a trial verdict which found a local politician guilty of manslaughter, rather than murder, in the shooting of fellow politician and LGBT activist Harvey Milk in late-1978],” Hackett said. “They’re such a stark representation of rage, and yet there’s nothing like firelight at night – this aesthetic appeal of the contrast of the light from the flames against the darkness of night. People like [Toronto writer and LGBT activist] Gerald Hannon have told me of seeing those pictures at the time and how they marked a certain moment of realizing that there were enough of us to make ourselves heard in a different way.” (At the RIC) 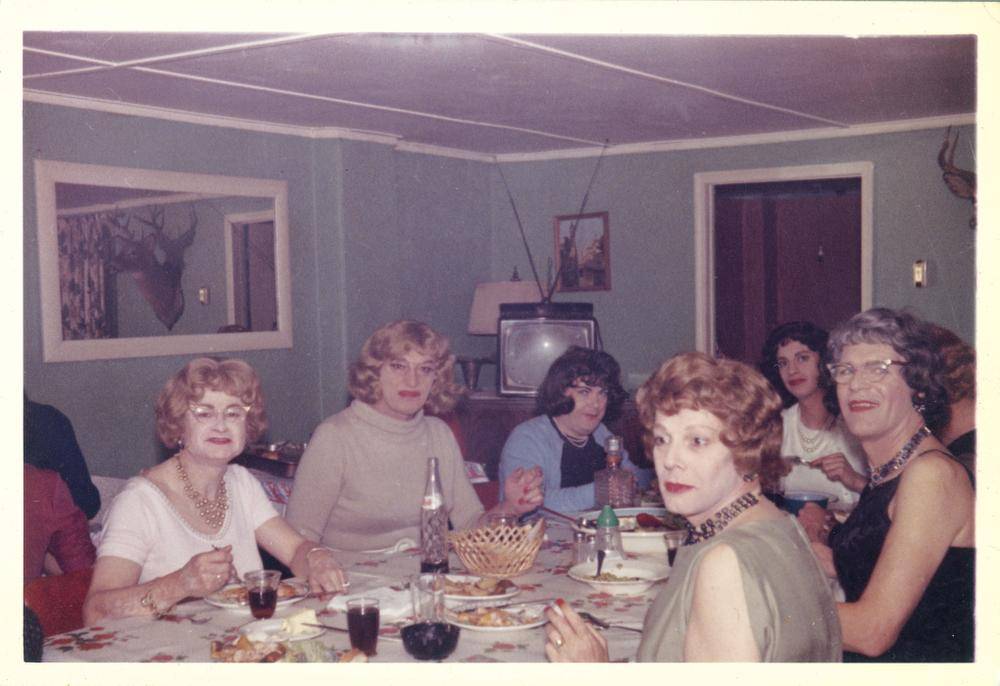 Casa Susanna was a retreat or camp in the Catskills region of New York that catered to a transvestite clientele in the 1950s and ’60s. The RIC exhibition includes 24 snapshots by an unknown photographer. Hackett notes how photographs can provide a sort of “reassurance necessary to seeing yourself in a different way.” The scenes of “quietude and everydayness” at Casa Susanna – playing Scrabble, eating dinner together, swimming – “contrasts amazingly with what we know the rest of world was like at the time, a world that had no tolerance for a man who felt more at home in women’s clothing than men being out in public.” (At the RIC)

Many of the city’s major art exhibiting institutions have stepped up to curate shows that chime thematically with WorldPride 2014. Among them:

The Gardiner Museum of Ceramic Art. Carried by the advertising slogan “Clay is so gay!,” it’s presenting Camp Fires: The Queer Baroque of Leopold L. Foulem, Paul Mathieu and Richard Milette. The exhibition, curated by St. Mary’s University Art Gallery director Robin Metcalfe, features dozens of ceramics, some dating to the early ‘70s, by these veteran Quebec-born artists, Some of the objets are provocative so the Gardiner is suggesting that parents in particular preview the show at www.gardinermuseum.com/campfires before bringing the kids. Through Sept. 1.

Museum of Contemporary Canadian Art. Over the Rainbow: Seduction and Identity. Cineplex president Salah Bachir and long-time co-vivant, artist Jacob Yerex, have a personal art collection totalling more than 3,000 works, much of it on themes of queer identity. This group show, curated by MOCCA artistic director David Liss, includes some of the duo’s greatest hits, including art by General Idea, Andy Warhol, Robert Mapplethorpe, Attila Richard Lukacs and Betty Goodwin. June 21 through Aug. 17.

Editor's note: The original version of this story incorrectly stated the name of the co-editor of the book Casa Susanna as Michael Hunt rather than the correct Michel Hurst. This version has been corrected.