There's been a disturbing absence of civic place-making honouring aboriginal culture in northwestern Ontario. Buried for too long, the influence of native design – both historical and contemporary – has been finally expressed in a beautiful narrative set down on the north shore of Lake Superior. As part of a transformed, publicly accessible waterfront now complete in Thunder Bay, Ryan Gorrie, an Ojibway architecture graduate, has worked poetry with traditional bentwood, a material once honed by his ancestors, to craft a lyrical vessel that is open to the city and the waters beyond.

What's unique to this redevelopment is the way it honours the local aboriginal wish to create an "inclusive circle" between all people and nature. Besides offering a magnetic and meditative use of waterfront land, it is exactly the kind of physical presence that declares to Canadians and the rest of the world that aboriginal culture matters.

The Spirit Garden is set in downtown Thunder Bay on reclaimed industrial land – not far from a site where aboriginal settlements are estimated to date back some 9,000 years. In the distance spreads ocean-scaled Superior and, beyond, Nanabijou, the land mass also known as the Sleeping Giant. Two centuries ago, this port was a shipping terminus and gateway to Western Canada. More recently, a marina with private boats moored along the gigantic piers has operated here.

But in 2006, a group of local business people calling themselves the Ambassadors recommended the creation of a vibrant waterfront that would, at last, be publicly accessible. Prince Arthur's Landing, as the new development came to be called, might have just been a matter of a pretty reclamation. But this is one of those rare initiatives that seamlessly integrates modernity with a traditional aesthetic.

Gorrie's Gathering Circle bentwood structure rises from a meandering headland nearby. From a distance, it appears like a curved proscenium, woven from green, easily malleable spruce trees. The spruce were harvested in the summer, the bark stripped off and the wood bent into structural trusses immediately after.

Much of the bentwood tradition has been lost, so the architects were forced to look hard for a knowledgeable craftsperson. They found a builder living in British Columbia, who returned to his native Fort William First Nation reserve to craft the spruce trusses. Not surprisingly, Idle No More protests have also been cranking up the volume this winter within the Gathering Circle's embrace.

At the end of Pier 2, past tree-lined walkways and elevated wooden art boxes, is the viewing circle: a titled disc of land directing views toward Nanabijou. The disc measures some 24 metres in diameter and provides green space for ceremonies, blessings, music. Engraved into the perimeter of the circle is a poem, Round Dance, by aboriginal writer Sarain Stump. Don't break this circle/Before the song is over/Because all of our people/Even the ones long gone/Are holding hands.

The revitalization of Thunder Bay's historic port holds important lessons for other cities struggling to create joyous public space along previously industrialized waterfronts. Heritage has been retained – and renovated – to allow a circa-1900 brick structure to become the Baggage Building Arts Centre, a two-storey public gallery that incorporates studios and retail. The Water Garden Pavilion, defined by a contemporary design vocabulary that uses fine textures of wood with light-giving glass, fronts onto a summer splash pool and winter skating rink. There is a skateboard park, and dedicated running and cycling trails.

As part of the Prince Arthur's Landing mixed-use development, an eight-storey hotel is currently under construction along with two similar-size residential buildings. The modest scale is intended to blend easily with the rest of the downtown.

The waterfront design resists clichéd aboriginal-literal motifs (a metal-clad tepee, say, or sculptures of bison). Instead, with multilayering and subtlety, it allows abstraction to breathe and the power of nature to resonate. To that end, large ash logs are used as seating in an informal amphitheatre next to the bentwood Gathering Circle.

The force of the design comes, importantly, from four ideas-intensive charrettes sensitively organized by the site's master planners and architects, Brook McIlroy of Toronto and Thunder Bay . Representatives from Fort William First Nation, Robinson-Superior Treaty Communities and the Red Sky Métis participated. Early on, Calvin Brook, the lead design principal, made the acquaintance of Gorrie, then a University of Manitoba architecture student, who was participating in one of the preliminary charrettes. Brook noticed his design talent, and invited him to "champion" the open-air pavilion. Gorrie knew little about his Ojibway culture, having grown up in Thunder Bay, where, the 31-year-old says, "there was a shame with being an Indian." But the cultural grounding and academic offerings at the U of Manitoba had awakened a pride in Gorrie, and he started to work on his Ojibway language there.

In British Columbia, from UBC's First Nations House of Learning to the controversial use of the Inukshuk for the 2010 Winter Olympics – the expression of aboriginal cultural is a powerful brand promoted by the province

Not so in northwestern Ontario. "There's a lot of racism that still exists," says Brook. But building civic identity is easily done, especially when the optimism and expertise of aboriginals are harnessed. His firm continues to collaborate with aboriginal design experts while expanding its practice north of Thunder Bay.

Every civilization depends on mind-altering images of itself. Without aspirational architecture and meaningful places to gather, a society risks annihilation – a little bit every day. That makes more sense than ever to architect-intern Gorrie. "The health of a culture is measured by what you can visibly see," he says. "This is a small part of the decolonization process."

For more on great design in wood from around the world, follow Lisa Rochon's blog, chasinghome.org. To see a video of the Thunder Bay project, visit click here. 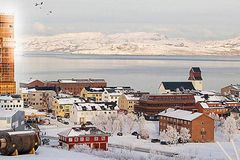