When it comes to the popularity of ancient civilizations of the pre-Greco-Roman variety, Egypt rules among the North American public. Ancient Egypt has labyrinthine tombs, pyramids and mummies, The Egyptian Book of the Dead, Holy Moses in the bulrushes and more bling than the combined households of Kanye, the Kardashians and Liberace. Such is the mania that even a less-than-stellar exhibition like Tutankhamun: The Golden King and the Great Pharaohs managed to draw 405,000 visitors to the Art Gallery of Ontario during a 41/2-month run four years ago.

But if you're one of those suffering from pharaoh fatigue, wearying of tales of Tut and Osiris, vitrines of papyrus scrolls and hieroglyphics, heaps of sarcophagi and gold, gold, gold, the Royal Ontario Museum has a most refreshing show on now through early January. It's Mesopotamia: Inventing Our World, an exhibition of more than 200 artifacts, some dating as far back as 3500 BCE, most never seen in Canada before, from what's often called "the cradle of Western civilization." That's the span of land between the Tigris and Euphrates Rivers, in what is now (mostly) Iraq, that for roughly 3,000 years was home to a succession of empires, most notably the Sumer, Assyrian and Babylonian.

The exhibition, which is having its North American premiere at the ROM after runs in Melbourne and Hong Kong, features 174 artifacts on loan from the British Museum, which, outside Baghdad's Iraq Museum, is likely the single largest repository of Mesopotamiana in the world.

Whereas Egyptian exhibitions tend to truck on the glamorous otherness of the pharaonic civilizations, the ROM show is, as its subtitle suggests, keen to elucidate the connectedness of our world with that of Hammurapi and Nebuchadnezzar. Blessedly, the pedagogy of this intent isn't tendentious or overbearing. The first comparison a visitor sees, in fact, is a witty one – an installation of a Sumerian clay tablet no bigger than a handheld digital device, dating to 2033 BCE and covered with script, positioned beside an iPad set to an app running the contents of the civilizations the visitor is about to experience.

It's an effective reminder that the Mesopotamians were the Jobs and Gates of their epoch, the inventors, in fact, of the world's oldest known systems of written communication (among much else – including systematic animal domestication, the spoked wheel, astronomy, the 60-minute hour, mathematics, large-scale urbanization and irrigation and … beer). The exhibition is chock full of other tablets, plus bowls and busts, gypsum reliefs big and small, weapons, utensils and sculptures, the British Museum holdings augmented by 14 pieces from the ROM's collection, as well as loans courtesy of the University of Pennsylvania Museum of Archeology and Anthropology, the Detroit Institute of Arts and the University of Chicago Oriental Institute Museum.

Sculpture buffs likely will be most impressed by the 1.2-metre-tall rendering, in dramatically lit magnesite, of the Assyrian king Ashurnasirpal II (883-859 BCE). One of the rare surviving Assyrian statues done "in the round," it depicts a decidedly authoritarian dude, wide of shoulder, straight of back, with a big beard worthy of an Amish patriarch.

While there is bling – including a 4,500-year-old gold drinking cup excavated from a queen's grave in the ancient city of Ur – it's not of the magnitude associated with Egyptian showcases. Indeed, this speaks to Mesopotamia's strength as an exhibition: It relies more on suasion, on the steady accumulation of effects, than on the immediate gratification provided by gold masks, elaborately decorated mummy cases and skulls. Its lengthy Toronto berth makes it perfect for repeat visits.

Mesopotamia: Inventing Our World runs through Jan. 5 at the Royal Ontario Museum. 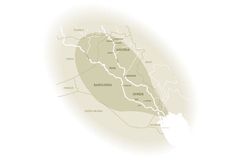 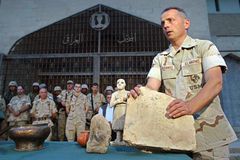 What happens to archeology when a region goes to war
June 20, 2013 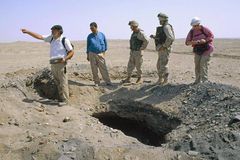 Breakfast with the Gods at Mount Nemrut
October 6, 2010
Follow James Adams on Twitter @Jglobeadams
Report an error Editorial code of conduct
Due to technical reasons, we have temporarily removed commenting from our articles. We hope to have this fixed soon. Thank you for your patience. If you are looking to give feedback on our new site, please send it along to feedback@globeandmail.com. If you want to write a letter to the editor, please forward to letters@globeandmail.com.
Comments