Elvis Costello has said that "writing about music is like dancing about architecture." That notion of the ineffable also has some application when it comes to describing Toronto's Scotiabank Nuit Blanche, the all-night contemporary visual-arts "thing" having its eighth incarnation Oct. 5. Organizers presented the entire artistic program for 2013 at a media conference Wednesday in Regent Park – but as ever the words seemed inadequate to the occasion being touted.

Take A Quack Cure by Guelph, Ont., designer/photographer/artist Lisa Hirmer. Described as a "performance piece" happening somewhere on University Avenue between Queen and Charles streets, it promises to "bring to life a troupe of otherwise-extinct creatures for a night of revelry." Or how about Tanks by Canadian-born, New York-based Cal Lane? It "juxtaposes industrial materials with domestic elements in sculpture by combining opposing extremes of lace and steel recycled into heraldic emblems of a lost industrial age."

Each sounds interesting if not a touch obscure – but as any Nuit Blanche devotee will tell you, it'll be the experience that will count. And there are going to be plenty of experiences this year: 112 art projects, in fact, a veritable paradise for insomniacs at locations indoors and out across the city, created by some 500 local, national and international artists. There likely will be a lot of people, too: Last year's sundown-to-sunrise extravaganza drew an estimated one-million visitors, including more than 170,000 tourists.

Details of the 2013 projects can be found at scotiabanknuitblanche.ca. As usual venues as varied as the Bata Shoe Museum, the Wychwood Barns, TIFF Bell Lightbox, the Gladstone Hotel and First Canadian Place will be hosting events, while neighbourhoods such as St. Clair West and the Distillery District will feature a potpourri of installations. But as has been the case since its 2006 inception, a lot of Nuit Blanche action will occur in the heart of downtown, at the curated, multipart, city-produced exhibitions. There are three this year: Off to a flying start at Toronto City Hall/Nathan Phillips Square, curated by Sorbonne University lecturer and former Nuit Blanche Paris artistic director Ami Barak; PARADE, of which Hirmer's A Quack Cure is a part, curated by Harbourfront Centre visual-arts head Patrick Macaulay along University Avenue; and Romancing the Anthropocene, concocted by Waterloo, Ont.-area curators Crystal Mowry and Ivan Jurakic, occurring on King Street West between Yonge and John (Lane's Tanks is part of this).

Off to a flying start is an homage of sorts to the centenary of the readymade, that audacious conceptual gambit originated by Dadaist prankster Marcel Duchamp that recast everyday artifacts – urinals, bicycles, shovels, glass containers – as museum-worthy objects. In this spirit, Nuit Blanche organizers are presenting the largest edition ever of Ai Weiwei's famous Forever Bicycles sculpture – 3,144 linked bicycles in Nathan Phillips Square. Other highlights: France's Melik Ohanian's El Agua de Niebla, a giant hammock, measuring 4,100 centimetres by 645 cm, made by Mexican craftspersons, stretched above the city's streets; and Air of Paris, a "scent installation" by Canada's Faith La Rocque, named after a Duchamp readymade, "that invites visitors to take an olfactory journey to Paris, 1919."

One new wrinkle this year is an extension of viewing times for some of the projects beyond Oct. 5, through Oct. 14. The six projects include the Ai and Lane installations as well as Garden Tower in Toronto, a massive construction of hundreds of interlocked chairs by Japan's Tadashi Kawamata at Metropolitan United Church, and Pascale Marthine Tayou's Plastic Bags, a huge sculpture of bags and nets that will occupy much of Bell Trinity Square. Also new is 1nspired Night, a "project activation" by Scotiabank that will project videos and photographs of Nuit Blanche insomniacs onto a huge canopy on Bay Street, between King and Adelaide. 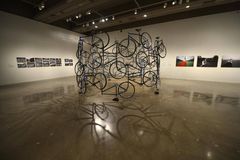 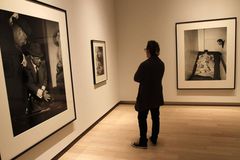 Who’s behind the Nuit Blanche apocalypse at City Hall?
September 28, 2012 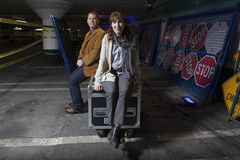