The sculptures of Montreal's Valérie Blass defy easy categorization. For that matter, they defy easy assimilation. To confront a Blass sculpture is, at least partially, also to confront one's ideas about the function of sculpture, not to mention the more important function(s) of transgression in art.

Blass does not create lovely three-dimensional objects to behold. Rather, her work replicates a kind of obsessive-compulsive, relentlessly compiling mindset – an interiority driven by dissociative (at first sight) associations, dots connected that do not make (at first) cognitive sense, don't connect – and thus, the works are more frightening than seductive.

Unless you're a total pervert (in the happy way).

I brought two friends who are both veteran theatre artists. The first thing these dear hams said was, "Sexy!", and the show was all uphill from there.

Three sculptures in particular trigger this turned-on-while-confused sensation, and all of them are made from the most unlikely materials.

Femme Planche is a near body-sized sculpture of a crouching female figure. The figure's forearms and hands rest on the floor, while its legs remain locked upright, thrusting the backside into the viewer's face. Resting cozily between the cheeks of the buttocks is the spade of a shovel, with its long handle following all the way to the floor.

Similarly, the large work entitled Ce Nonobstant, both invites and repels. About seven feet tall and basalt black, the painted Styrofoam sculpture resembles a stalagmite, a cool and patient rock sentinel. And then you turn and see that from one side of the rock a slender arm, a slender creamy blue arm, is extending, holding a deadly sharp pointed stick. Again, Blass is playing hard to get. The rock tower, a refugee perhaps from Stonehenge, is a welcoming, mystical presence. The armed arm practically yells Back Off.

My favourite work, however, is the post-human figure made of mounds of synthetic wig hair, plus a pair of Miu Miu high heels. Entitled L'Homme souci ( The worried man) the sculpture is both voluptuous (the wigs form bulbous, curvy muscles, fibrous loins) and, well, disgusting (the wigs are of the cheap sort, more wooly itchy than silky). The abundant evidence of artifice, as conveyed by the wigs, conflated against the silhouette the sculpture casts – that of a curvy, fleshy creature, a Rabelaisian sexpot – both disrupts and re-aligns the inherent sexual expectations; expectations naturally attached to what is essentially still a nude figure in high heels.

Alongside all these Cronenbergian flesh/not flesh, desire/revulsion dynamics, Blass's many tower-like assemblages seem rather conventional. But there are subtexts a-plenty in these works as well.

Blass employs everything from pipes to animal-shaped planters to onion soup bowls for her tall, misshapen totems, which are made from found and/or rebuilt objects: But underneath the seeming randomness of her collection of objects, an instinctual logic waits - an atavistic like-to-like, sympathetic magic.

Her smaller works, in particular a cheap ceramic David to which cat-shaped milk jugs and ashtrays have been attached, compress this pile-on sensibility, creating a density of visual cues, noise and bluster, whereas her taller works create meditative, and, yes, silly too, chains of meaning.

When viewed with the more overtly sexualized works, Blass's assemblages betray a parallel distrust of the exact, especially in any attempt to replicate the organic, the bodily, the human.

We are all masses of contradictions, mash-ups, breathing chunky scrapbooks, Blass's work informs us – and here are our synaptic flares, and burps, made concrete.

Paul Cvetich at You Me Gallery
Until July 8, 330 James St. North, Hamilton; youmegallery.ca

Paul Cvetich's wooden swarms jump off the walls at You Me Gallery like plates of internal organs – very prettily carved and sweetly painted internal organs, mind you – frozen and then thrown, ever so gently tossed, into the air.

Tongue shapes lap over lattices that nestle inside stomach forms harbouring penile replicas. And that's not the half of it. Endlessly suggestive, Cvetich's sculptures will remind viewers of early abstract art, the board game Operation, bird houses, and melting candles.

What keeps this work from veering off into gross-for-gross's sake is Cvetich's calming colour range, his tendency to paint the most wormy, slithering shapes in nursery room hues; wild flower pinks and blues, butter yellows, Kermit green.

Wood is the new plastic. 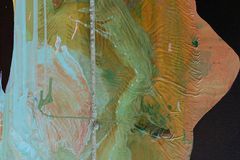 There’s a cultural critique hiding with these dogs
June 15, 2012 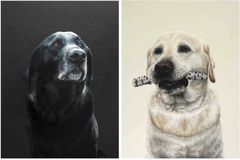 Post-industrial anxiety, made one stitch at a time
June 8, 2012 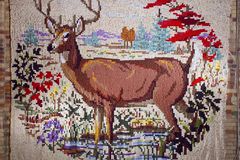