If the contentious post-suicide history of the work and life of Vincent van Gogh is any indication, it could be years, maybe even decades, before a dispute between a Canadian van Gogh expert and Amsterdam's Van Gogh Museum is resolved. Perhaps, in fact, there never will be a resolution.

The dispute centres on the worldwide publication this week of a book that reproduces 65 hitherto unseen sketches that the Canadian, Bogomila Welsh-Ovcharov, says van Gogh did between the spring of 1888 and the spring of 1889, while living in Provence in southeastern France.

Dr. Welsh-Ovcharov, professor emerita of art history at the University of Toronto, was shown the original drawings in Aix-en-Provence in August, 2013, by Franck Baille, an art historian and auctioneer acting on behalf of the drawings' owner. The Toronto scholar has been researching the drawings ever since and, in the process, enlisted the support of a fellow van Gogh expert, England's Ronald Pickvance.

The current owner, who is pleading anonymity, reportedly received the sketchbook – actually a repurposed commercial ledger – containing the drawings as a birthday present from her mother in 1964. Previously, the sketchbook had been, virtually unseen, in the possession of relatives of Joseph and Marie Ginoux, owners of several properties near the famous Yellow House van Gogh occupied in Arles and proprietors of a nearby café he frequented. Indeed, prior to occupying the Yellow House, van Gogh lived in the café from May to early September, 1888.

The release of the book, Vincent van Gogh: The Lost Arles Sketchbook, at a media conference on Tuesday in Paris drew a simultaneous rebuke from the Van Gogh Museum. Established in 1973, it has the world's single largest collection of van Gogh art. Officials there decried the sketches as the work of a van Gogh imitator. They said the museum had, in fact, already seen "high-quality photographs" of many of the alleged van Goghs, sent to them by their owner in 2008, as well as, in 2013, "a number of the original drawings." Looking at the style, technique, ink colour, provenance and iconography of the sketches, "we came to the conclusion [then] that [the sketchbook] is not by van Gogh," a senior museum researcher told The New York Times. "We have not changed our opinion."

Dr. Welsh-Ovcharov and Mr. Pickvance are holding firm as well. In an e-mail to The Globe and Mail on Tuesday evening, the Toronto scholar said: "Ronald Pickvance and I stand behind our attribution." Speaking to The Times, Pickvance declared: "These are absolutely okay, from one to 65. … End of song, end of story."

In her e-mail, Dr. Welsh-Ovcharov also said that "the museum's conclusions are made on photographs … not the careful study of the [actual] 65 drawings. … Also, it has evidently not spent time reading the book."

On Wednesday, a representative of the book's Canadian distributor said Abrams, the book's English-language publisher, and Éditions du Seuil, its French publisher, were planning to issue a fuller statement on Thursday.

In her e-mail, Dr. Welsh-Ovcharov said the Van Gogh Museum's comments were "not a surprise," especially given the vast number of attributions, misattributions, reattributions and deattributions that have distinguished the van Gogh legacy for more than a century.

Before his death in 1994, John Rewald, the distinguished historian of Impressionism and Post-Impressionism, wrote that van Gogh may well have been forged "more frequently than any other modern master." There also have been "more heated discussions and differences of opinion, more experts attacking other experts over the authenticity of van Gogh's works than that of any artist of the period."

Some of the "blame" can be attributed to the artist himself. As the U.S. historian/journalist Timothy Ryback, writing in 2000, noted, van Gogh was a prolific letter-writer but an unreliable record-keeper.

Moreover, he painted for less than a decade, from the age of 29 until his sad death in mid-1890 at 37, coming to his signature or characteristic style of portrait and landscape painting late in his career. Before then, Mr. Ryback said, "he experimented with a diverse range of styles, dabbling in traditional Flemish painting, Impressionism, pointillism," while copying works by Rembrandt, Jean-François Millet and Japanese printmakers. Often he would do "one version of a painting and, if he didn't like it, make another version. Occasionally, he would make a copy of a portrait as a gift for the model." He sometimes paid for services with paintings or gave them away to friends," he said.

This proliferation has helped to contribute to doubts about even some of the Dutch artist's most famous works.

For example, Portrait of Doctor Gachet (1890), housed in the Musée d'Orsay, is generally considered genuine, but there are naysayers who argue that it's a fake, perhaps painted by the doctor himself. The so-called Yasuda Sunflowers (1889), named after the Japanese insurance company that paid $40-million (U.S.) for it at auction in 1987, was quickly knocked as a forgery. It wasn't until 2002 that it was allowed entry to the canon.

In 1928, the first van Gogh catalogue raisonnée included among its roughly 2,200 paintings, sketches and drawings 33 canvases that later were determined to be forgeries, commissioned by Berlin art dealer Otto Wacker. In 1930, the catalogue's author, J.-B. de la Faille, published a second, 173-page book, titled Les Faux van Gogh, that "not only corrected errors in the first catalogue" but added almost 145 fakes.

Even the mighty Van Gogh Museum has been tripped up on occasion. For instance, Jan Hulsker's "canonical" 1996 catalogue raisonné of van Gogh paintings, drawings and sketches seriously questioned the authenticity of 45 paintings attributed to the Dutch master, 16 of them held by the museum. The Van Gogh Museum acknowledged as much in its 2002 journal, saying the 16 "may no longer be considered genuine."

Occasionally, the situation goes the other way. This happened three years ago at the Van Gogh Museum with an oil called Sunset at Montmajour, painted in 1888. The large canvas was first brought to the attention of the museum in 1991 by its owner. Over the previous decades, it had been examined and assessed in the hope that it would be authenticated . But in each instance, the painting was shunned, as it was when it was brought to Amsterdam. The painting, museum officials said, had two strikes against it: It had no signature and they could not locate the scene it depicted. However, another investigation was launched circa 2011 and the result was a thumbs-up.

Sometimes confusion even occurs over the facts of van Gogh's troubled life. Earlier this year, in her book Van Gogh's Ear, historian Bernadette Murphy included a diagram by the artist's physician, Félix Rey, showing the astonishing severity of the injury that the artist famously inflicted on his left ear in late December, 1888. Dr. Rey, who tended to the artist for at least two weeks after the episode, did the two-part drawing in 1930 at the behest of author Irving Stone. It seemed to answer, once and for all, the question as to whether van Gogh had removed a part of the ear or pretty much its entirety.

However, it wasn't that clear to Steven Naifeh, co-author of a 2011 van Gogh biography that was followed three years later by a hotly disputed magazine article suggesting that the artist had not died by his own hand but was accidentally killed. Mr. Naifeh told The New York Times that the Rey illustration "[was] not credible." He said he preferred the testimony of the wife of van Gogh's brother as well as that of fellow artist Paul Signac and Dr. Paul Gachet. They all reportedly "saw a portion of the mutilated ear remaining, so much in fact that when Vincent was seen from face-on, the damage could go unnoticed," Mr. Naifeh said. 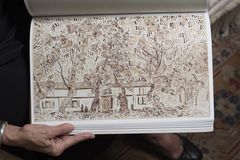 Vancouver artist Douglas Coupland finds van Gogh look-alike for sculpture
November 16, 2016
Follow James Adams on Twitter @Jglobeadams
Report an error Editorial code of conduct
Due to technical reasons, we have temporarily removed commenting from our articles. We hope to have this fixed soon. Thank you for your patience. If you are looking to give feedback on our new site, please send it along to feedback@globeandmail.com. If you want to write a letter to the editor, please forward to letters@globeandmail.com.
Comments