These days there's a whole lotta art goin' on 'neath the vaulted ceiling of the Great Hall in Toronto's Union Station – but Maple Leaf fans were paying it little or no mind the other evening as they traversed the majestic expanse. They had more important things in mind, it seems. Like getting to the Air Canada Centre to watch their beloved but hopelessly hapless hometown heroes suffer yet another drubbing on the ice.

Who knows, though. Maybe something caught their eye at Villa Toronto, the audacious visual-arts whoop-up in the Hall that opened last Friday featuring works from a couple of dozen artists, foreign and local. Interest piqued, maybe three or four fans, as I write, are considering a return visit by GO Train or subway. But they'll have to hurry: Villa Toronto, or at least its hub in Union Station, calls it a week Friday evening.

There certainly was a lot of excitement in advance of Villa Toronto's arrival. Billed as an alternative of sorts to the commercial fair phenomenon that's so defined the art world in the last 10 years, Villa, in concept at least, promised to "activate," refresh and repurpose the Great Hall at the same time as it took art out of the art fair/gallery "ghetto" and "engaged" both passersby and art aficionados with a potpourri of video, installation pieces, sculpture and performance.

After two visits to the site, I can report the actual results have been mixed. A few things have worked well. Among them: the monumental all-white totem pole, made from almost 11,000 sheets of stacked, modelled paper, erected at the Hall's west end by Toronto's Dean Drever; the large gold-plated dumpster and complementary chrome port-o-potty by Newfoundland's Zeke Moores (apt "metaphors," don't you think, for the eternal Union Station renovation?); U.S. artist JD Walsh's Outliers, a two-channel video-and-sound installation, one channel in the shape of a hi-hat cymbal, the other shaped like a triangle; S.S. Hangover, Ragnar Kjartansson's glacially paced but hypnotic video record of the performance piece he presented at the 2013 Venice Biennale (It consists of a brass sextet travelling back and forth on a canal between two docks, playing a Kjartan Sveinsson dirge in the key of Wagner); the sweet Beckettian desolation of Torontonian Tony Romano's The Final Crystallization, in which a 16-mm image-less film loop continuously plays between a projector and a chromed tree branch, accompanied by a soundtrack of Romano singing Neil Young's 1970 77-second masterpiece, Till the Morning Comes, over and over (and over) again.

Too often, though, the works have been too small, inert or obscure to gain traction in the ebb and flow of Union's daily traffic. For instance, ZR Hallengeist, a diaphonous ceiling drapery made in 2013 by Switzerland's Reto Pulfer, might have worked in another, more modest-sized space – in the Great Hall it hovers with all the presence and impact of a scarf caught on a powerline. Similarly, Iris Haussler's nubby sculptures from the archives of the fictional Joseph Wagenbach Foundation is a bit of smart postmodernist whimsy better experienced and grasped in the calm of a gallery.

Conceived largely by Warsaw's Raster Gallery with local input, Villa Toronto has, at the very least, likely awakened artists, gallerists, collectors and curators to the possibilities of the Great Hall as a visual-arts venue. But for it to work as such, any future event in the register of Villa Toronto will, I think, have to be rigorously curated and its various offerings conceived specifically for the site (and if not conceived for the site, carefully positioned in relation to the Great Hall and the exhibition's other artifacts).

In its week-long duration, Villa Toronto has been a many-tentacled beast, thrusting its way into various spaces around the city. One was Walker Court in the Art Gallery of Ontario where last Friday, before an attentive, enthusiastic crowd of 450, the previously mentioned Kjartansson presented "an evening of misery," accompanied by fellow bearded Icelander David Por Jonsson. This consisted of 16 songs, pretty much equally split between German lieder by Strauss, Schumann et al. and American country-flavoured hurtin' tunes like Hank Williams's My Son Calls Another Man Daddy, Twilight by the Band and the great Townes Van Zandt wrist-slitter Tecumseh Valley. Kjartansson sang and played serviceable guitar, Jonsson harmonized and played a deft piano. Primarily known for his performance art, Kjartansson stripped down to his underwear for a bravura, champagne-fuelled croon of Schubert's An die Musik; for the most part, though, he and Jonsson kept the camp reasonably in check and let their genuine affection for the bathos of their material shine through. 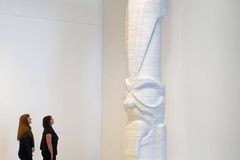 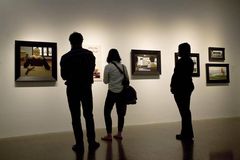