The small child's leather tunic has fringe along the arms and torso, and the neck is embroidered with beads in purple, pink and turquoise. But what really grabs the eye is the jagged bullet hole in the centre of the chest, and the large stain of dried blood on the back.

Till Monday noon, this gruesome Plains Indian artifact was on show at the galleries of Waddington's, the Toronto auction house, which planned to sell it during a decorative arts auction on Tuesday evening.

It was abruptly pulled from the sale after social media began to heat up with complaints about a bloody remnant of violence against a First Nations child being hawked as decorative art. The tunic's full provenance is unknown, as are the exact circumstances of the shooting.

"We don't want to upset anybody, so are withdrawing the item and returning it to the consignor," said Waddington's president Duncan McLean, minutes after the sale preview ended.

But two other indigenous objects of historical importance are still headed for the auction block: a pair of heavily beaded moccasins that belonged to the Lakota chief Sitting Bull, and a 19th century mask of the Haudenosaunee (Iroquois) False Face curing societies that are still active around the Great Lakes. The Haudenosaunee Council forbids the sale or even the exhibition of medicine masks.

Those auction lots are part of a much larger market of important native artifacts that many indigenous people see as an affront that demands action. Who, if anyone, they say, has a right to buy, sell or display objects that have functional significance to indigenous communities?

"These are important items to people who live today," said Hayden King, a member of Beausoleil First Nation who teaches history and native politics at Ryerson University. "I'm generally of the belief that they should be returned." Some government agencies and museums agree, but the market includes many players who do not.

The items at Waddington's came from the estate of William Jamieson, a collector and dealer of often macabre artifacts who at one time owned the Niagara Falls Museum. The tunic was displayed in a cabinet next to a number of executioners' blades, with an electric chair at the room's opposite end.

"It was very, very difficult for me to catalogue [the tunic], because of its relation to a terrible period of history," said Sean Quinn, the Waddington's decorative arts specialist who reviewed the item and decided it was worth $2,000 to $3,000. "The death of any child is horrific."

Yet until social media took notice, no alarms went off at Waddington's, where Mr. Quinn and his colleagues spent months preparing items for the Jamieson sale. "What if it were Trayvon Martin's hoodie?" someone asked on Twitter.

"It all reflects this apparently endemic belief that native people are extinct, so we can do whatever we want with their stuff," said Mr. King. The same mentality, he said, was at work when the Seattle Art Museum bet the loan of a 135-year-old Nuxalk mask on the outcome of the Superbowl in January (the mask was withdrawn from the bet after complaint from the Nuxalk Nation of Bella Coola, B.C.).

"My job is to liquidate objects of the estate," said Jessica Lindsay Phillips, Mr. Jamieson's fiancée at the time of his death in 2011. She said that Mr. Jamieson had returned sensitive objects in the past, including mummified remains that are not legally saleable.

"We believe the fairest thing for the estate and for any institution interested is for us to auction things to the highest bidder," Ms. Phillips said.

Items of indigenous cultures entered the money economy as soon as Europeans arrived in the Americas. Major objects were sometimes simply taken, including the G'psgolox totem pole chopped down and sold by a federal Indian agent in 1929. It was returned by a Stockholm museum in 2006, after decades of lobbying by West Coast native groups. Items from the long-outlawed potlatch ceremony were returned in 1979 to indigenous peoples on Quadra Island, where they are housed at the native-run Nuyumbalees Cultural Centre.

"Those articles are critical to keep the potlatch going," said Mr. King. As for the Plains Indian tunic in the Jamieson collection, he said, the best option would be to send it to a research institution such as the National Museum of the American Indian, where its specific origin could probably be gleaned from details of beadwork and stitching. Then it could be returned to the descendant community.

Ms. Phillips agrees that the tunic is "a piece of history." But she said it will be up to the executors to decide how to dispose of it.

From electric chairs to cannibal forks: 11 things you can nab at this odd auction of … stuff
April 24, 2014
new
Sikhs buy back their history one bid at a time, but say museum space is a hard sell
April 22, 2014 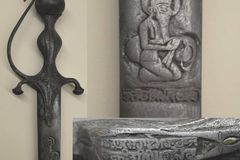 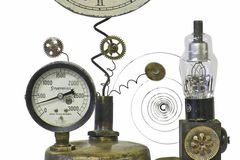