Wendy is an ongoing comic series about a woman in her 20s making her way through intersecting art and punk worlds, chasing love interests and humiliating herself between attempts to "do her work." Her story was an easy sell for me, and the strip offers a nesting doll of other easy sells: a comedy of manners about a particular scene; a dead-on representation of being young in any scene; an immediate representation of how disgusting it is just to be, how disorienting it is to be in one place and then another.

Wendy is an avatar for Walter Scott, her creator. Other characters embody parts of his personality, or parts in dialogue with other parts. The comic is a way of shape-shifting, a concept that runs through Scott's work, and makes Wendy so much more interesting than satire.

Wendy was born on a placemat in 2011, two years after Scott graduated from the fine arts program at Montreal's Concordia University. He published the comic as a zine at first; a full-length book was published last fall by Koyama Press, and the strip will appear regularly in the online magazine The Hairpin.

Writers preoccupied with the awkward – insecurity, low-paying jobs, vomit and bad sex – often hyper-intellectualize it. Authors such as Tao Lin or Marie Calloway have rendered their lives in excruciating detail as a way of taking the sting out of awkwardness – getting really, really close until it looks like a bunch of dots. Scott does the opposite by recreating the sensation of being humiliated.

The comic is drawn simply, and Wendy's body takes the form of her inner state. When she gets sick on MDMA, she becomes a face snaking through the dark out to the alleyway. When her crush pokes his head above her laptop, she explodes into squiggles. She looks like how it feels. "I know it's working if it makes me laugh," Scott says.

The idea of shape-shifting is something he grew up with – "in my community, it was a folk tale, or it's a part of our beliefs, that people can change their shapes," he says. He recognized the same logic in books such as Kathy Acker's Don Quixote.

"In my personal life, I'm Mohawk from Kahnawake, but I never felt like I fit in, because I'm queer," Scott says. "And it's a lot easier if you're straight – I mean, it's not really easy for anybody there, obviously, but I never wanted to have a girlfriend and a truck and a job. I'm moving in and out of the territory all the time, and sometimes it's because I'm in Japan – it's like, I'm in Japan and then I'm back on the res, and that's really a cognitive dissonance for me sometimes. Growing up thinking that there's only one place where you belong."

Shape-shifting becomes a survival strategy, a way of reconciling worlds at odds, and then slipping out from under the identities they impose. "It's almost a way to evade being oppressed … to have the ability to never really be one thing, if you're constantly transforming. It has the potential to be exhausting, but there's also a freedom in being able to hide and navigate and change and reveal."

Scott's sculpture exhibition, Habitual Present, is currently showing at 8-11, a gallery and arts collective in Toronto. (It's on until March 16, and he'll be giving an artist talk at OCAD University on March 14.) His sculptures are flat but emblematic. Sometimes they're extensions of the comic (dangling hair, say) and sometimes they feel like "stakes in the ground" to mark where he's been: a flag, for example, planted in the base of a small, square lamp and featuring what might be a hot pink section of intestine.

These pieces of art live in a liminal spot between the "Wendiverse," as he calls it, and the place from which the comic is sourced – "a little bit like they exist in a cartoon ink world, but in the real world, too."

The sculptures are also inspired by and partly sourced from a store called Sekichu, which Scott describes as Japanese Home Depot – "they sell a lot of just planks of wood, and planks of plexiglas. It's really up to you to create your own spaces, because everything's so compact." The works are made from materials such as denim and vinyl – cheap, durable, easy to ship.

Scott's based in Toronto for now. "It's this super-long, starting-to-get-boring chapter in finding what home is for me," he says, "and it's very exhausting. It starts to feel like you're a refugee, but you don't know where you're running from." The logic of shape-shifting makes sense of that disorientation, which feeds the work: "How do I turn that into a propulsive energy, where my home is being in a constantly transforming state? And, like, how do I make that okay?" 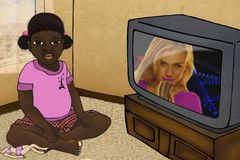 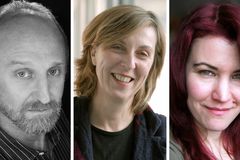 Kate Taylor: Mosul vandals make a show of power, but were the artifacts real?
March 3, 2015

Canadiana up for auction in London on preview at Toronto’s Gardiner Museum
March 3, 2015 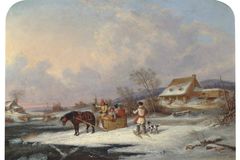