A tough new exhibition at the Ryerson Image Centre shows how some of the world’s greatest wartime photographers documented faces and moments while adhering to the unique styles of their day. James Adams reports

War is hell. It has also sold a hell of a lot of newspapers, magazines and books, especially since the rise of photography in the early 19th century. Millions of photographs of conflict have found their way into print in the West in the last 160 years. It’s a complicated story of change – in editorial practices, aesthetic preferences, printing technologies, ideologies, public taste and of course manipulation. And it’s getting a timely, compelling telling in a provocative exhibition at the Ryerson Image Centre in Toronto.

On now through Dec. 7, Dispatch: War Photographs in Print, 1854-2008 demonstrates how taking a shot “is only one step in the process of illustrating war” – a process followed by Roger Fenton during the 1853-56 Crimean War, George Rogers roaming Manchuria during the Russo-Japanese War of 1904-05, Robert Capa on the beaches of Normandy in the Second World War, or former Globe and Mail photographer Louie Palu on patrol in Afghanistan’s Helmand province in 2008.

Superbly curated by RIC research head Thierry Gervais, this tough, ambitious exhibition draws heavily on RIC’s own holdings, including those of the famous Black Star Collection, obtained in 2005, plus sources such as the Archive of Modern Conflict in London, the University of Texas (Austin), the National Gallery of Canada, art dealers and individual photographers.

“The point of the show is to explain how the aesthetic of an age, its visual syntaxes, are important in conveying the news,” Gervais observed in a recent interview.

“Not only do you have to take the shot to record what’s happening, but you have to do that according to your visual culture, and for a very simple reason: If you are not producing an image that is attractive, it won’t work on the page.

“This means the photograph not only has to convey information, it has to convey and provoke emotions. That’s the necessary balance.”

“Often,” he continued, “editors and photographers say, ‘This is a good photograph.’ But what does that mean? What are the criteria? This show explains that the criteria are rooted in historical contexts. They were different in the 19th century than nowadays: in the 19th, when a photograph was blurry, the engraver would retouch it; nowadays when the photograph is blurry, it’s printed [as a spread] while the sharp image, the more detached one, goes into the art gallery.”

During a recent tour of Dispatch, Gervais commented on some of his pairings. 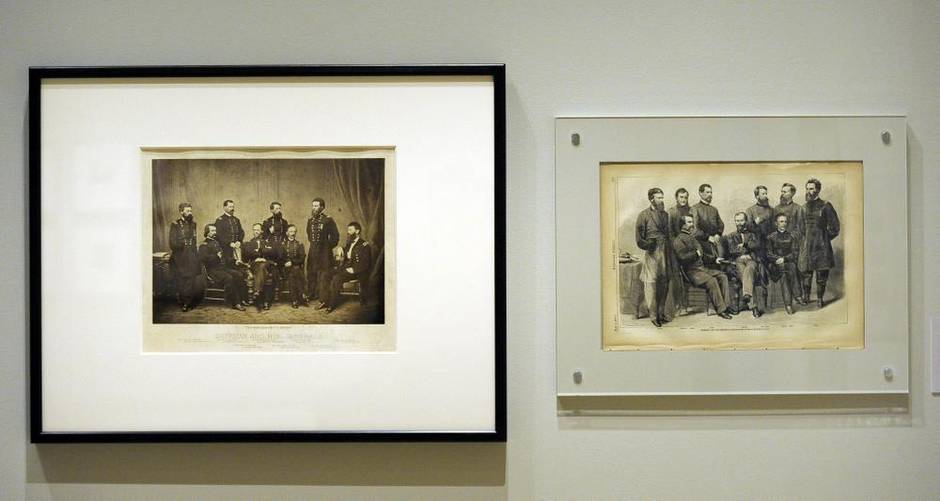 BEFORE PHOTOSHOP, THERE WERE ENGRAVINGS

The picture of Union Maj.-Gen. William Sherman and staff, left, was taken in 1864 or 1865 by George Barnard. (Sherman is generally credited with being the first to utter “War is hell.”) But this albumen print was made in 1866, a year after the end of the American Civil War (1861-65). An earlier print of the same photo was used for the engraving published in Harper’s Weekly magazine in 1865. Wood engraving was the most popular reproduction technique in the 19th century for incorporating pictures onto a page with text. Perhaps unsurprisingly, the engraved image often “improved on” or “corrected” the source image. Noted Gervais: “There was no distinction back then between an engraving made from a photograph and an engraving made from a drawing or a painting in terms of credibility.”

Viewers will note there are eight men in the source photograph and nine in the Harper’s illustration. Moreover, the officer seated on the far right in the photo, Maj.-Gen. F.P. Blair, is standing (second from right) in the illustration. A figure missing from the photo ends up in the magazine illustration standing, second from left, identified as Kilpatrick. The source photo should not be entirely trusted either: Close inspection reveals that Blair wasn’t in Barnard’s original, but was pasted in later. “Today,” Gervais said, “we are always projecting what we’re thinking about photography and falsification and manipulation, but at that time that’s not what they had in mind. They wanted a good representation … This reminds us that photographs of war, press photographs of war especially, are not only windows open to the world, they’re determined creations, too.” 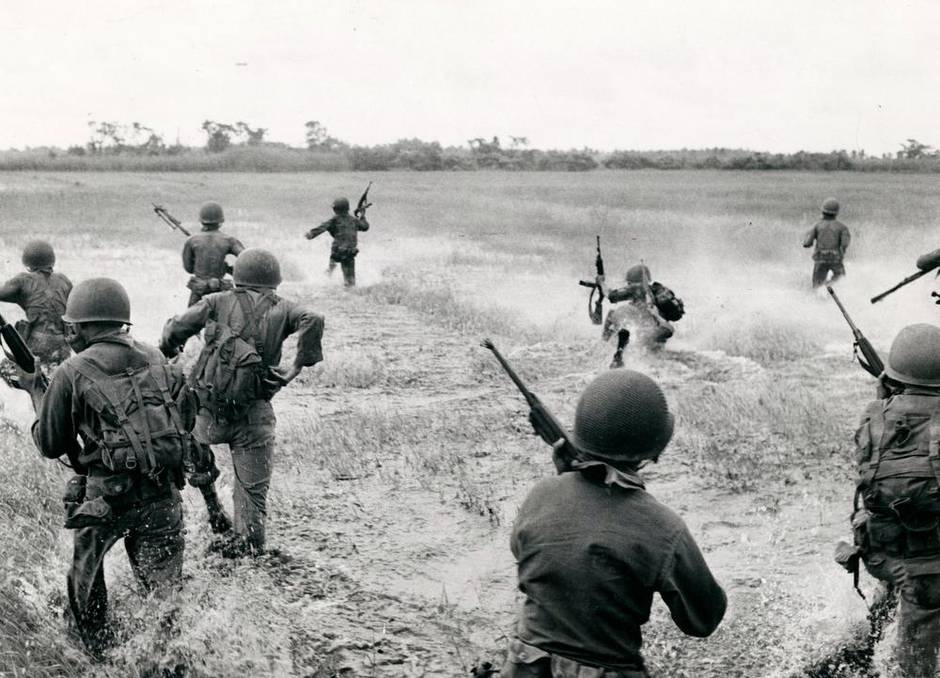 FROM NORMANDY TO VIETNAM, AN IMAGE ENDURES

Recalls Gervais: “I was going through Black Star’s Vietnam pictures and when I saw this one, I said, ‘That’s an amazing shot, a good photograph!’ As I looked through more images, I realized this one [above, by François Sully] was reminding me of another one, and that was Robert Capa’s shot [below, of American troops wading towards Omaha Beach on D-Day June 6, 1944. The picture was published in Life magazine, June 19, 1944]. 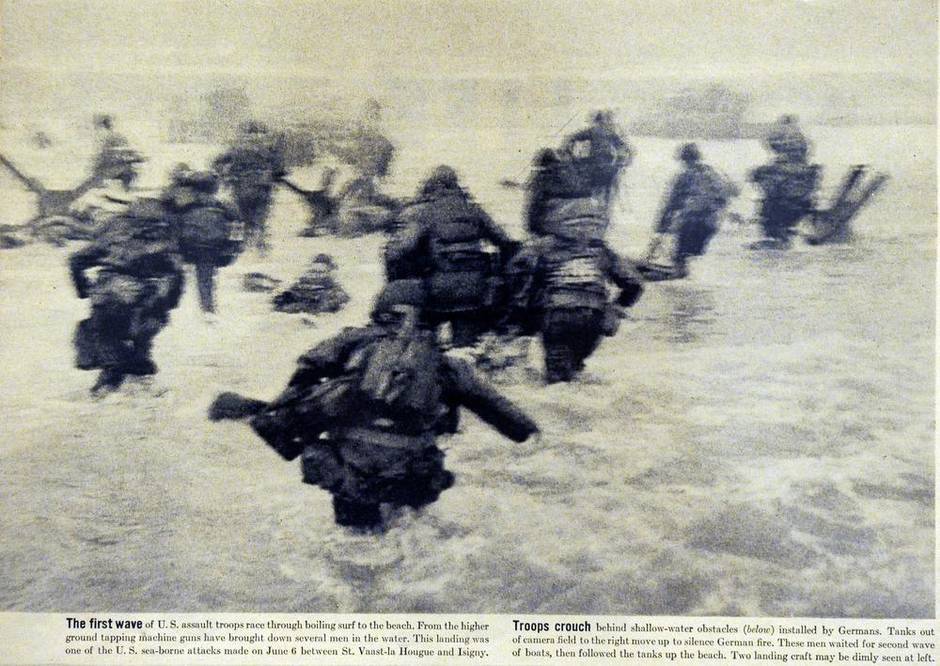 ... I thought it would be interesting to show how photographers were conveying news about the Vietnam War but also conveying a history, a double history – the story of the Second World War and the story of photojournalism. How could Sully not have known Capa in 1962? Capa was already dead [killed in Vietnam eight years earlier], already famous.” The New York Times used a cropped version of the Sully in its Aug. 26, 1963, international edition – more than a year after it was taken – as part of an analysis of South Vietnam’s “war against the Communists.” 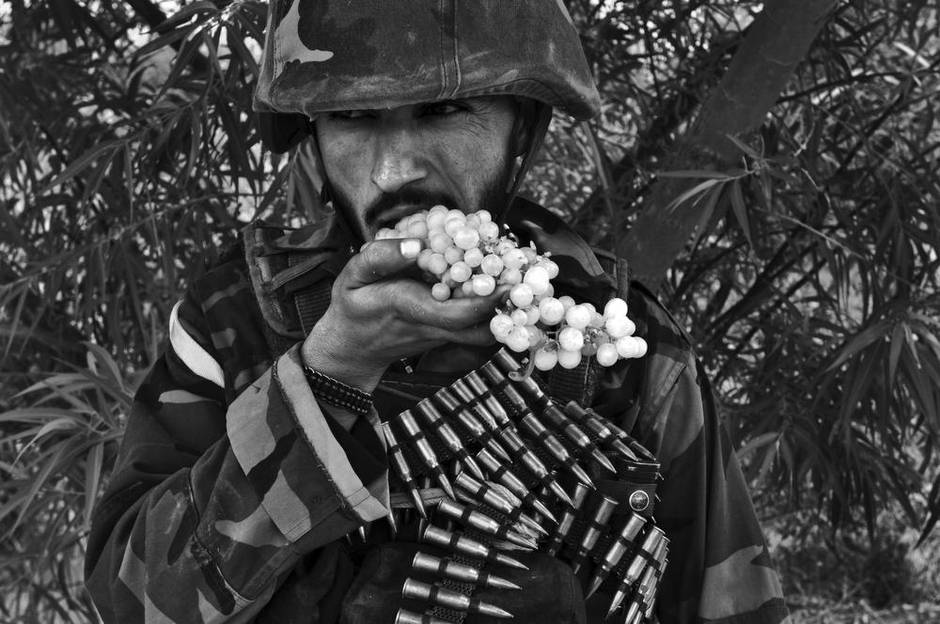 A WARTIME IMAGE THAT REFERENCES CARAVAGGIO 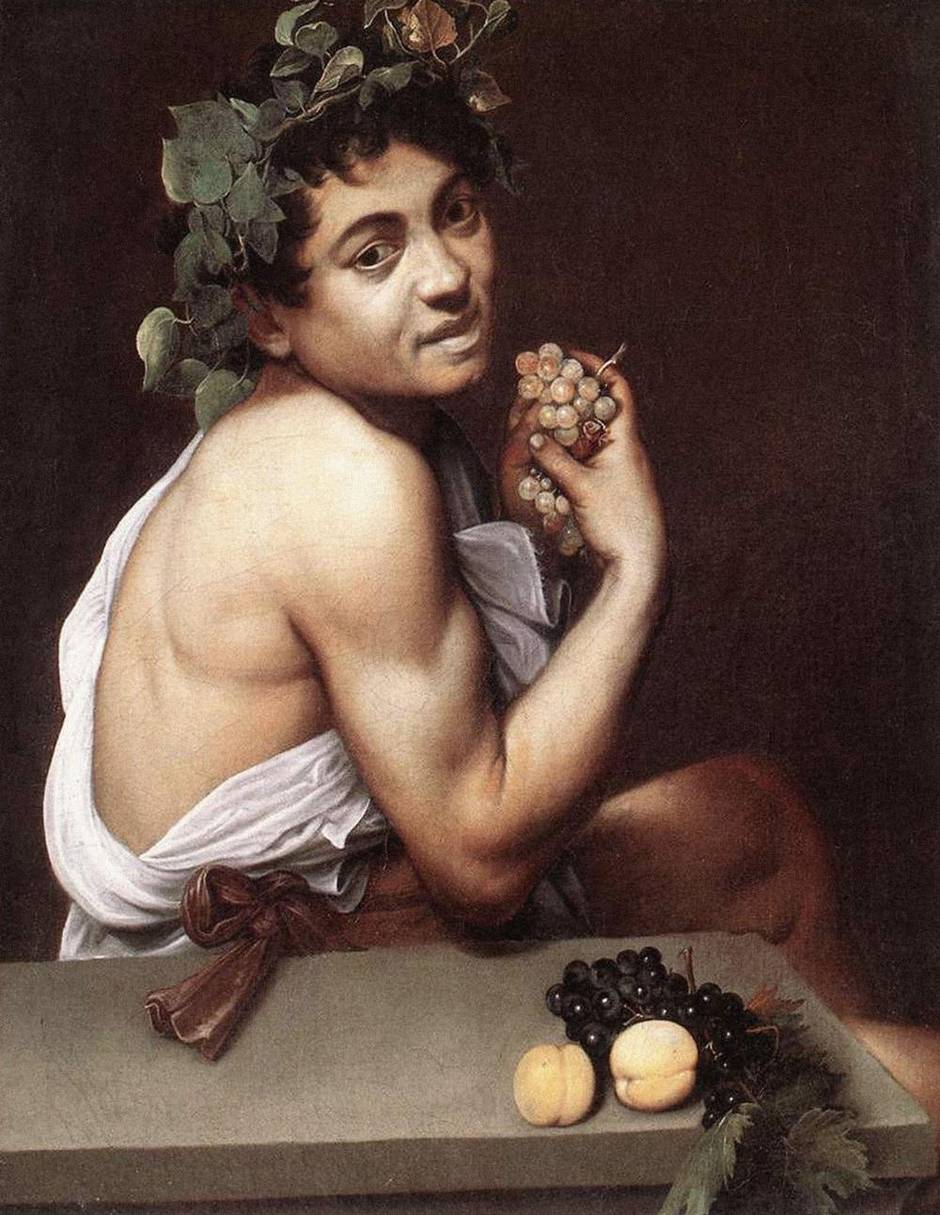 Canadian photographer Louie Palu says paintings have influenced his photographs. As he told Gervais: “I went to [the Ontario College of Art and Design University in Toronto]. I got training in the history of art. I have images in mind and when I am taking images, I am referring to others.” For this 2008 photograph of an Afghan National Army soldier, above, the inspiration stretched back, he says, to the late 16th century and a medium other than photography, namely Caravaggio’s famous oil-on-canvas, Young Sick Bacchus, in the collection of Rome’s Galleria Borghese.

Photojournalism used to be considered an idiom at a remove from the art world. No longer. Palu’s work has been exhibited in many art institutions internationally. This picture, printed at an impressive 51 cm by 61 cm, comes to the RIC exhibition “courtesy Kinsman Robinson Galleries,” Palu’s commercial dealer in Toronto. The print is in black and white, not colour. Until 30 years ago, colour was regarded as “the prerogative of the slick advertising man, that dealer in cliché and banality,” to quote one critic. Serious, artistic photography was black and white. Here, says Gervais, is an illustration of “adjusting the form to where you want to show the image.”

Some quotations have been edited and condensed.