Everybody likes an underdog. And looking back a half-century at the urban battles of the sixties, we find one in Jane Jacobs: the bespectacled activist standing astride the highway that threatened to wreck her kids' park. She was the writer who saw the poetry of the polyglot city where everyone looked after each other's kids, and who, in The Death and Life of Great American Cities, captured "the ballet of the good city sidewalk." For many progressives, she personifies the small and the bottom-up.

That was nearly 60 years ago, and today Jacobs is on top. Urban planning theory takes her insights to heart. Her name is sung by local activists across the land. But what does she have to teach us in 2017? Do her lessons translate to an era when people, money and power are heading into cities, rather than out of them?

These are some of the questions raised by Citizen Jane: Battle for the City, which is now playing at the TIFF Lightbox. Matt Tyrnauer's film looks back at that most famous period of her life, before she moved to Toronto, and pits her against her famous nemesis: the "master builder" Robert Moses. It's a David-and-Goliath story, the imperious civic official against the troublemaking writer from Scranton, Pa.

As a history lesson for the unititiated, the film is a winner. Moses looks and sounds like a B-movie villain, and in life he was an extraordinary figure: Never elected, he reshaped the continent's most important city over a 50-year career. He held up to a dozen city and New York State positions at a time, coming to personify the blend of big government, business and Modernist planning that produced "urban renewal." Cities everywhere followed his example. Montreal's sixties expressways and office towers, and the razing of Halifax's Africville, bear the mark of Moses.

Jacobs, of course, opposed it all. The absolute commitment to the car; the contempt for urban dwellers, particularly people of colour, who dared to complain about their "slums" being reshaped; and the blind faith in credentialed planners and their grand schemes.

In that context, she was right about almost everything. She emphasized a mix of uses – stores and homes and schools and offices cheek-by-jowl; the value of old walkable city blocks; a diverse population; and lots of people. She argued for bottom-up planning and listening to the wisdom of those who knew a city best: its people.

Jacobs's criticisms changed the world. All this wisdom has by now been baked into the planning profession. Montreal is removing some of its urban expressways. Vancouver is tearing down its viaducts. Toronto is rebuilding major concentrations of social housing to make them more mixed and more like a city instead of "projects." Toronto is also rebuilding its downtown Gardiner Expressway, in an unconscionable concession by Mayor John Tory to the wishes of wealthy drivers. But that's a rear-guard battle. We live, increasingly, in Jacobs's world.

Here's the problem: We don't live in the 1950s or 1960s. New York in that era was dealing with an outflow of manufacturing jobs, the obsolescence of its port, and the pull of suburbia. This made room for bohemians such as Jacobs and her architect husband to settle in lofts or storefronts that were nearly free. In Citizen Jane, Moses propaganda of the sixties casts a large swath of Manhattan as "A VALLEY OF ECONOMIC DEPRESSION." The city needed to be saved, and Jacobs's ideas helped save it.

But, today, that "valley of depression" is worth untold billions, home to movie stars and hedge-fund managers. The only poor people who can afford to move there are those who live in public housing. Which was built by … Robert Moses.

Yes: Moses did some good. He helped bring to New York City – along with parks, pools, bridges and untold miles of expressway – a strong public-housing system, with 400,000 tenants in publicly owned apartments alone. That system and its buildings are very far from perfect, but they are a lifeline for that city. It's exactly this sort of policy that our cities need today: robust construction of new social housing. Increasing inequality, and the increasing concentration of wealthy people in the central and walkable neighbourhoods, will not be solved by grassroots activism.

Citizen Jane addresses all this obliquely by bringing up today's mass urbanization: Contemporary Chinese urbanism, one commentator says, is "Moses on steroids."

Jacobs-ian activism will be helpful in making sure this work is inclusive and just. But a bottom-up critique won't house billions of people. Likewise, the intensification of car-oriented suburbs will take Jacobs's finesse along with major planning changes and smart transit-building.

However, we can gather one lesson from Jacobs: Don't let government get in the way of city life. She believed that cities worked naturally as a kind of ecosystem, with economic and social activity evolving into intricate and beneficial forms. She was not quite a libertarian, but she was deeply suspicious of people with authority and big ideas.

This can generate surprising politics. In Toronto, where she lived for 40 years, she helped limit the stupidities of urban renewal, such as the Spadina Expressway; but then in the 1990s contributed to the "Two Kings," an initiative to revive the city's warehouse districts. The basic idea was to open the gates, and let the ecosystem of the city fill in with whatever was fastest and hardiest.

That has meant renovations of old warehouses – but also a growing crowd of tall, new condo towers occupied by middle-class city-lovers. Meanwhile the central house neighbourhoods she loved in Toronto, and where she lived, have become permanently unaffordable to new residents.

"The important thing about Jane Jacobs," the critic Paul Goldberger says in Citizen Jane, "was to be skeptical, to doubt the received wisdom, and to trust our eyes instead."

So: Where are today's underdogs? And where, even, do we need a bit of Bob Moses's medicine?

Citizen Jane: Battle for the City plays the TIFF Lightbox through May 7 (tiff.net). 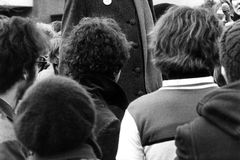