H.R. Giger, the Swiss artist who died after an accident on Monday, for a time defined the aesthetics of rock music and of science fiction both, and embodied the affinity between the two. His slithering machines and his obsession with spines inspired a generation of tattoo artists. The sexual darkness he imagined even came to represent a certain social position: to admire Giger was to declare a fondness for black clothes and angry music and possibly drugs; it meant you were receptive to the idea of anarchism and believed certain conspiracy theories. Indeed, you might even have a pentagram somewhere in your apartment.

An affection for Giger is also in a strange way a class indicator: The art-educated may admire his draftsmanship but will dismiss the content as adolescent and kitschy, as album-cover art, as airbrush van art. Stoner art. To revere Giger is to proclaim a rebelliousness, a defiance of conventionality, but at the same time, paradoxically, it signals a lack of sophistication. Some – the sophisticated, which is to say those lucky enough to have been sent to study the humanities in university – may say it even signals a deep conventionality. They will point to Giger's nude female bodies, usually being simultaneously penetrated and tortured by phallic biomechanical monsters – how is that rebellious? Isn't it just old-fashioned?

Giger's artistic talent is not in question. His most powerful and influential creation, the monster from the Alien movies, is undeniably terrifying. It is sexual violence personified, sex as reptilian rape, as parasite and disease. The double sets of jaws, the inner jaws that shoot out like a long, drilling proboscis, a penis dentatus, is particularly brilliant.

And Giger himself lived up to the expectations of the antisocial artist. Always dressed in black, frequently angry and dismissive of the Hollywood producers who made him so famous, he worked late at night and never opened his curtains.

His influences are usually said to be Dali and surrealism, but I see the equal presence of 19th-century Symbolism and Decadence, in particular Odilon Redon (1840-1916). Redon also favoured a palette of grey and black, and painted scenes from bad dreams – eyes and skeletons recur. He became the model of the decadent artist when he was singled out by the most pessimistic of all novelists, France's J.K. Huysmans, in his 1884 novel about painful aesthetics, Against Nature. The novel's protagonist, the exquisitely refined aristocrat des Esseintes, muses that Redon's paintings "… ushered in a very special type of the fantastic, one born of sickness and delirium." Redon painted a drowning Ophelia, of course, like his pre-Raphaelite cousins in Britain. He is associated with the poet Rimbaud, with opium and the Belle Époque. If he were alive today, he would surely be a goth.

The art nouveau that followed Redon is an even deeper influence on Giger. We think of art nouveau as a primarily commercial aesthetic – because of the advertising posters favoured by ambitious coffee shops – but it arose from some defiantly unconventional scenes, notably the Vienna of Gustav Klimt and Egon Schiele, and the London of Oscar Wilde and Aubrey Beardsley. Some of Beardsley's more grotesque imagery – particularly his illustrations for Wilde's shocking play Salome, with their naked women and deformed musicians and dripping heads – is right in line with Giger's tastes. And the serpentine tendrils that wrap every surface of a Giger composition are classic art nouveau.

This is why it's funny that Giger is still something of an embarrassing taste – one of those kitschy-cool things that the cultured tend to think of as guilty pleasures. His art is beautiful and scary in a somewhat juvenile way, but then so is the work of Gustave Moreau and Pieter Bruegel and Hieronymus Bosch, and we're allowed to go to university and admire them. Is it Giger's work with Hollywood and with bestselling pop music that gave him a fatal taint, the smell of money excommunicating him from the church of white-walled gallery art? Is it that he is totally lacking in irony or self-consciousness? Will his death make us think once again about the arbitrary divisions between mass and high, poppy and brainy?

Personally, I do not want to be the kind of person who has any pleasures that are guilty. Giger is one of mine, guilt-free. 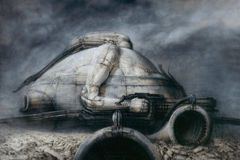 Alienation: Monster of a DVD box set is revealing
December 5, 2003
Follow us on Twitter @globearts Opens in a new window
Report an error Editorial code of conduct
Due to technical reasons, we have temporarily removed commenting from our articles. We hope to have this fixed soon. Thank you for your patience. If you are looking to give feedback on our new site, please send it along to feedback@globeandmail.com. If you want to write a letter to the editor, please forward to letters@globeandmail.com.
Comments