Uncovering a forgotten master may be every art historian’s dream. It can be fun for the rest of us, too, though seldom such conflicted fun as the Montreal Museum of Fine Arts is offering in the first big Canadian exhibition devoted to Orientalism.

The show’s specific focus is Jean-Joseph Benjamin-Constant, who in his day (1845-1902) gained an international reputation for his vivid paintings of harems, emirs and Moroccan street scenes. These were all executed in his Paris studio, a colourful workspace-cum-showroom that was crowded with props gathered during his youthful trips to Morocco and Granada.

He often worked on a large scale, as if to immerse the viewer fully in his exotic scenes. Interior of a Harem in Morocco, the gigantic canvas at the entrance to the exhibition, portrays the idle favourites and their black slaves at nearly life-size, as the North African light streams over intricate carpets and carved woods.

Of course, he never witnessed this scene in real life. Benjamin-Constant’s Orientalism was as thinly rooted in ethnographic reality as the bacchanale in Saint-Saëns’s opera Samson et Dalila, currently in production by l’Opéra de Montréal. The painter had a superb eye for colour and form, but didn’t look deeply into his exotic subjects.

“I admire these men who have made an art of lying on the ground,” he wrote in Harper’s magazine in 1889, “in such a manner that they no longer retain the remotest aspect of humanity.” These men are all over his Orientalist canvases, often sprawled in subjection to a haughty prince, who could be seen as stand-in for an imperial governor. 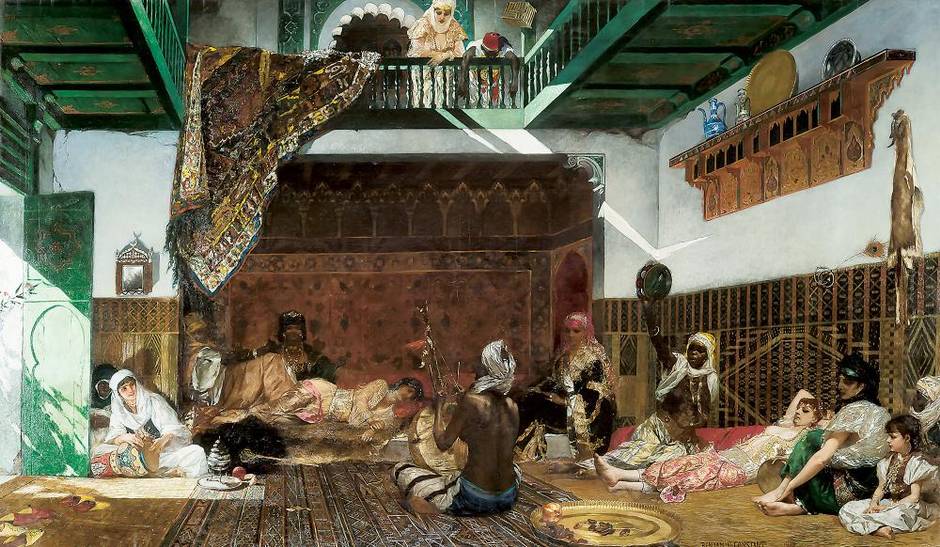 All art is propaganda, as George Orwell said, and in Orientalist painting, the propaganda lies unusually close to the surface. Benjamin-Constant and his peers provided a pictorial fantasyland for Europeans whose fixed ideas about the Near and Middle East had formed in tandem with their governments’ imperial ambitions there.

“Orientals were rarely seen or looked at,” Edward Said writes in his ground-breaking book Orientalism (1978). “They were seen through, analyzed not as citizens or even people, but as problems to be solved or confined.” It was convenient to think of the conquered as backward, static people who could use a dose of Western ways. It was titillating to think of their supposedly simple yet lurid sexual dynamics, in which men controlled the harem and the harem never agitated for women’s rights.

Benjamin-Constant’s art reflects a moment in the history of ideas that still resonates at a time when Western ideas about the Muslim East conform to fantasy as much as fact. For that reason alone, the MMFA’s thoughtful and spectacular exhibition is a must-see.

The museum doesn’t gloss over the ideology of the images. It even solicited contemporary Moroccan works that critique Benjamin-Constant’s passive odalisques – “pretty little animals,” as he called them, confined to wait upon the pleasure of a man.

But co-curators Nathalie Bondil (of the MMFA) and Axel Heméry (of the Musée des Augustins in Toulouse, France) maintain that we should appreciate Benjamin-Constant’s work mainly for its painterly values. Though he followed popular taste and reviled Modernist tendencies, they say, he was actually an innovator. He used a much brighter palette than other academic painters, brought architectural volumes into painting in a newly dramatic way, and helped to advance ornamental qualities as a form of l’art pour art.

It seems perverse to celebrate a frankly anecdotal painter for his allegiance to pure art. But there’s no denying the boldness of Benjamin-Constant’s colours, or the way he revels in texture and ornament. “A piece of fabric can set the tone for an entire painting,” said his like-minded friend Henri Regnault, whose Orientalist work is sampled in this show.

Benjamin-Constant also had a knack for monumentalizing his imagery. Many of his canvases feature one or more massive keyhole arches that deepen his lighting and frame his figures, as within a theatre proscenium. As art historian Christine Peltre writes in the MMFA’s massive scholarly catalogue, he “borrows a great deal from the stage.”

He also borrowed from Delacroix, an earlier painter of exotic scenes, a small grouping of which are included in the show. But whatever Delacroix actually knew about the people pictured in Arab Actors or Buffoons, he represents them as part of a whole society that includes mothers and children. Benjamin-Constant’s Orient, by contrast, is an assemblage of stereotypes, whether of slave, emir or concubine. As art historian Christelle Taraud writes in her catalogue essay, there’s no room in his Oriental fantasy for productive women, only sexually compliant ones, so children and mothers almost never appear. 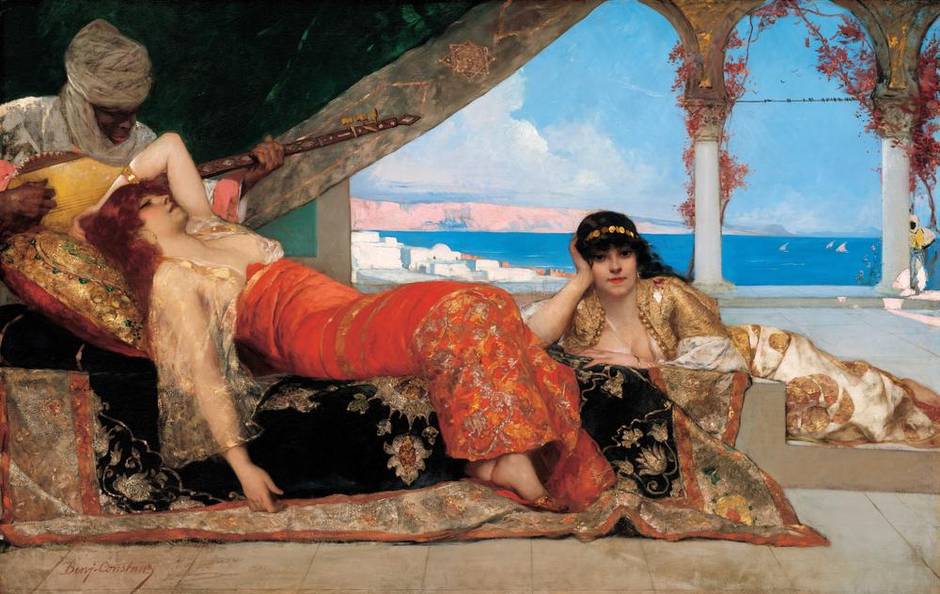 The Favourite of the Emir by Jean-Joseph Benjamin-Constant (Washington, National Gallery of Art)

There was room for strong figures, including powerful women. Benjamin-Constant’s Judith stares directly and fully clothed at the viewer, unlike the sprawling nudes of the harem paintings. A sword held across her hips and a blood-red background complete her identification as a stereotyped femme fatale, like Saint-Saëns’s Dalila or Mérimée’s Carmen.

The Moroccan Caid Tahamy shows a dignified seated chieftain surrounded by sword, saddle, harness and rifle, apparently capturing the man’s entire masculine world in one image. But it’s equally a personification of the unchanging East, proud and passive. There’s none of the incipient action you typically see in portraits of European hunters or military men.

Benjamin-Constant was sometimes pilloried in his own time as a provincial exoticist, but was mostly praised by critics who could seem stubbornly blind to what was actually on the canvas. One Parisian critic said the painter was “enamoured of truth to nature in the grand manner”; another praised him for his skill at “rendering the immense calm of the Orient … which nothing can disturb.” That was written in 1879, a few years after a violent revolt in French Algeria.

Features of Benjamin-Constant’s Orientalist style crept into his other work, including a lucrative line in portraiture. His full-length portrait of the opera singer Emma Calvé is backed by a hanging Oriental carpet, and the bodice of her gown is as brilliant as a torero’s (Carmen was one of her signature roles). The fabulous Entry of Urban II into Toulouse shows the Pope riding through an archway in a dusty blaze of orange, with trumpeters blaring from the ramparts. It’s an Orientalist tableau translated to a European scene, and unfortunately unavailable in Montreal – it’s a decorative wall panel in the Toulouse Capitole.

Benjamin-Constant’s portraiture, which brought him to the United States and Montreal, mainly followed Rembrandt’s practice of highlighting face and hands within a darkened ground. The nearly grey-scale palette of Young Bearded Man is very far from the riotous colours of Judith. A beautiful portrait of the artist’s two sons, posing casually with a dog staring out between them, hints at the kind of real domesticity missing from his Orientalist canvases. His most telling portrait, however, may be Queen Victoria (not loaned by Windsor Castle for this show), seen as a glowing ethereal presence surrounded by the symbols and insignias of power. She personifies imperialist might just as the naked noblewomen in Benjamin-Constant’s Sharifas symbolize colonial weakness.

The painter’s creative heirs were mostly in the popular arts, just as Saint-Saëns’s Orientalist music resonated longest in Hollywood. Benjamin-Constant’s most lasting impact may have been upon the photography of National Geographic magazine, which since 1890 has favoured exotic scenes rich in colour and texture. His vision of static Muslim backwaters and barbaric Eastern ways still appeals to a broad Western public. His Orient, blinkered and dehumanizing as it may be, is still with us.

Marvels and Mirages of Orientalism: From Spain to Morocco, Benjamin-Constant in His Time opens at the Montreal Museum of Fine Arts on Saturday and runs to May 31 (mbam.qc.ca). L’Opéra de Montréal’s Samson et Dalila ends Saturday night at Place des Arts.