In this special series, The Globe and Mail partners with award-winning  platform Wondereur to  explore the diversity of contemporary art from a completely new perspective. The  Globe and Wondereur  will approach radically different minds engaged in culture across the country  and around the world. Each month, we will ask them to share with us the work of  a contemporary Canadian artist who deeply touches them. This month, Globe Arts  deputy editor Barry Hertz talks to Cameron  Bailey, artistic director of the Toronto International Film Festival, about his first exposure to the art world, the genius of Drake and the work of his chosen artist, Tazeen Qayyum.

Nick Kozak, a winner of the Magenta Foundation's Flash Forward competition, is a regular contributor to the Toronto Star, Maclean's Magazine and La Presse. His coverage of the G20 in Toronto and the aftermath of the Charlie Hebdo attacks in Paris has been widely published. Here, he explores the world of Cameron Bailey. (Photos by Nick Kozak)

Was there art in your home while you grew up?

No – my parents divorced very early, so for most of my life I was raised by an emergency-nurse single mother, who was doing shift work. She loved reading and she loved theatre, still does, but visual art was not a big part of our lives growing up. I wasn’t one of those kids who was trotted off to the AGO. So I discovered art through my own education, through university.

So you weren’t exploring much through adolescence?

I was a big book nerd. From childhood, I read voraciously, and I loved writing as well, but not so much art. When I was at [Western University] in the 1980s, I had a girlfriend who studied at the Whitney Museum program in New York. That was a big introduction. I spent almost a year living in New York in the early nineties and I would go to the Whitney and MoMA and all the museums and smaller galleries.

Documenting the future of the art world, Wondereur is a ground-breaking cultural platform capturing the creative process of the most inspiring artists worldwide and providing exclusive access to their work. To learn more about Cameron Bailey’s top pick in contemporary art, continue to Wondereur’s photo documentary on Tazeen Qayyum.

Was there anything that just blew your mind during your time there?

Thelma Golden did a show called Black Male at the Whitney, and that was an impressive show because one of the things I think anybody has to do when they first begin to grapple with art history is just how you’re not in it. The history of visual art is a history of power and privilege and patronage. You’re trying to find a way to connect with what you’re seeing. I found the Black Male show fascinating because there were some very sophisticated ideas behind representation and power. Golden is a highly intellectually trained curator, and she brought that to bear. It was very heady to experience. 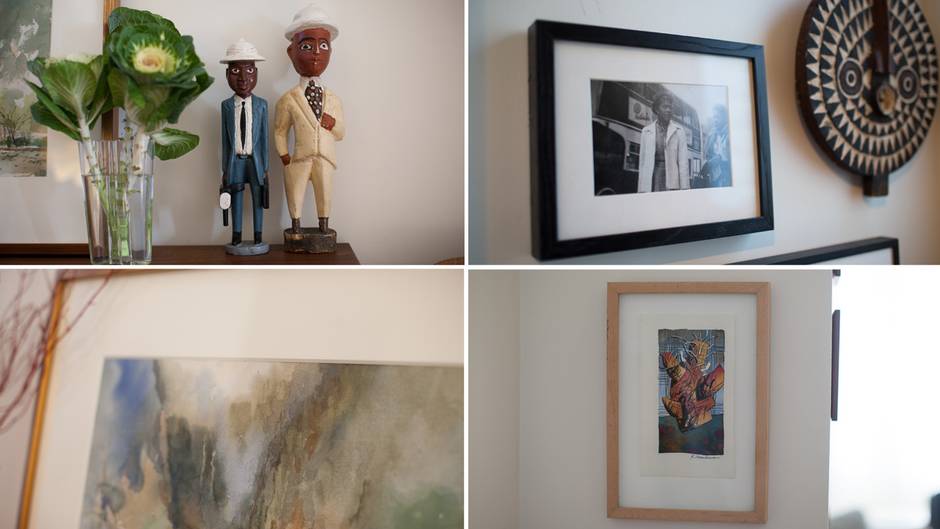 Some of the groundwork must’ve been laid while at Western, though.

Yeah, I did a degree in English literature, which became more a study of the theory of literature as I progressed through the degree. By the time I was in my final year, I was working as a research assistant to two professors who were doing a big Johns Hopkins encyclopedia of literary theory and criticism, and I was digging as deep as I could into those ideas. It was a quick side step toward the art world, because the art world at that time, for better or worse, was full of these people who had these long treatises on their work. I think the art world has changed a little bit since then – there’s been a return to more direct practice and less thinking through the art before you make the art. But when I was coming up, it was all about the ideas, and the ideas I was familiar with were from literature and film.

At what point did you transition from an interest in literary study to the world of cinema?

It was only my second year [at Western] that I took a film course. It was a contemporary cinema course, which began with Godard’s Breathless, and I had never seen any of his stuff. It then went everywhere but Hollywood, so it was Asian cinema, it was Latin American and Brazilian cinema novo, it was Italian and African film. That introduced whole new worlds to me. I still went off and did my Romantic writers courses and Shakespeare, but I began to gravitate toward that modernist break and the shift in culture across the board – it happened with all artistic disciplines, a more extreme form of self-consciousness, let’s say. So Joyce and Beckett and onward to post-New Wave filmmakers.

Do you enjoy that kind of challenge in the world of art – that you have to work to appreciate something?

To a point. I enjoy seeking out new stuff or when friends or colleagues say you should check this artist out. But what I don’t like is snobbery – a kind of consumer snobbery around culture, like I know everything there is to know about this rare kind of music, this subculture that only 1,000 people know about. When people lord it over each other, that’s such a part of contemporary hipster culture. I have no time for it at all.

Did you encounter any of that when you first went down to New York and started becoming more familiar with the world of visual art?

Weirdly, or maybe not weirdly, I found it more in Toronto. In New York, you would go to an opening, or you would go to a lecture, and everybody would be open to just listening to it, because it was like: Feed me more stuff. Whereas in Toronto, because it’s a smaller city, and maybe at the time it was a little less secure in its cultural authority, you would find people trying to guard their own body of knowledge, their own circle of friends, their own little coterie, and sometimes using alienating language, art jargon, to protect that. I don’t feel like there’s any idea that is too complex to be displayed to another human being. 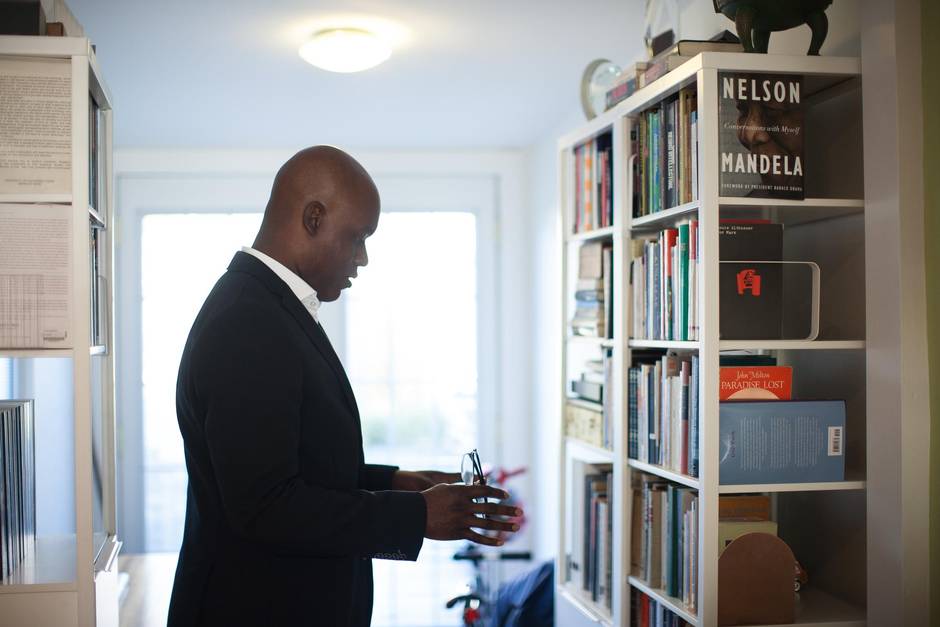 Cameron Bailey at his home.

Has the art scene, or discussion, matured since then?

I’m not sure that I have a close enough sense as maybe I should have to make a comment. There’s so much going on. What I actually like is that, okay, so this is probably inevitable, but I’m going to have to refer to the Drake video [for Hotline Bling]. We know that the song is based on an old Timmy Thomas track, Why Can’t We Live Together, which has this beautiful old organ and one of the first uses of synth tracks in the seventies. So there’s reference to this old, organic sound, and then the video is totally James Turrell. You’ve got this high-art reference in the visuals, and you’ve got Director X, another Canadian, and Drake mining these very beautiful, atmospheric, almost ecstatic images with gorgeous colour and light. There was a piece in The Atlantic a couple days ago saying this was a video made to be turned into GIFs.

Yeah, so the culture turns it around.

Exactly. So it’s so contemporary, it’s so of the moment, but it’s so wide-reaching in its references and its influences, and I think that’s very much a Toronto thing. People like to take from everywhere, they like to reinvent and remix, and I think that’s what makes it cool.

And it’s not a question of appropriating it, either. It’s turning it into something –

Something new, yes. I think that the Weeknd does the same thing, I think so many of what’s coolest that comes out of Toronto is exactly that: It’s mining. There’s this incredibly vast mix, this stew of influences and references that if you live in the city, you can’t help but absorb and turn into something fresh. 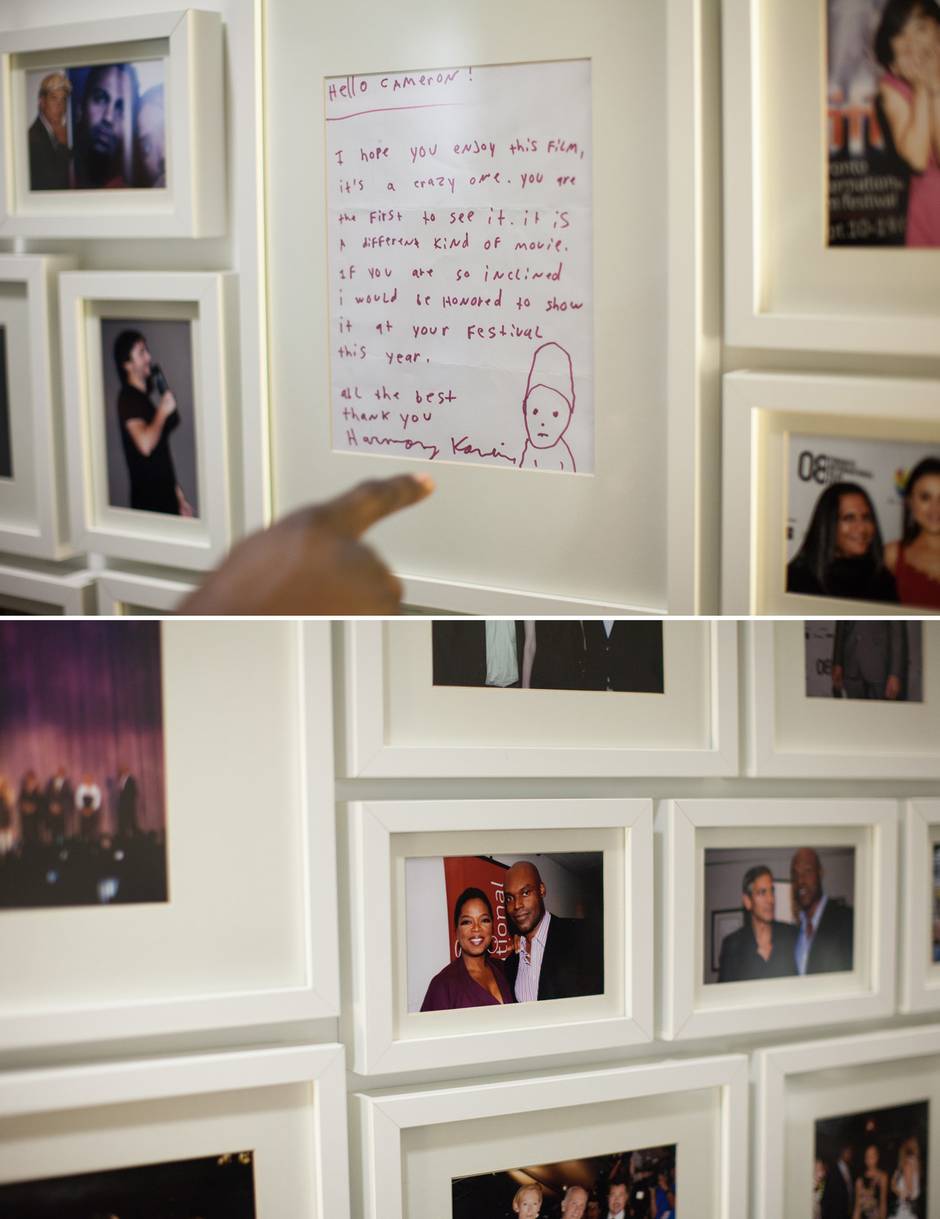 Framed photos, and a letter from Harmony Korine, on the wall of Cameron Bailey's office at TIFF Bell Lightbox.

With a young son at home, how important is it for you to expose him to different forms of art?

Hugely important, but I think it extends to everything because they are sponges, and they are open to anything. The clichés are all true. Four-year-olds draw like impressionists, and they are amazing because the way that they perceive the world and try to duplicate it in their own work is exactly what artists are trying to get to, after years of training. From early on, we did take Tate to the AGO, and we would just play, not try to educate him but just put him in that environment. We also try to have art in our homes, to show him images that were a bit surprising. He’s very into music these days, so on the way to school every day, we listen to new songs and kind of break them down and have fun with them. That’s amazing, just the expressivity of children is inspiring.

Tell me about Tazeen Qayyum, the artist you’ve selected for this series.

What I like about her is that she began and was trained in very traditional Pakistani art forms, miniature paintings especially. She has the ability to practise that traditional art form at a very high level, but she’s also introduced new currents into her work from contemporary Western art practice – installation and different kinds of things like that. There’s a kind of a hybrid element to what she’s doing, which is what inevitably I’m going to be attracted to.

Do you remember when you were first exposed to her work?

Yeah, that was about 12 years ago, through an ex-girlfriend of mine, a curator and artist herself.

Sounds like ex-girlfriends have been pretty formative in your art history.

I mean if you don’t learn from your girlfriends and boyfriends, then you’re not doing it right.