You know a living artist has hit some form of the big time when his or her art is included in a calendar, affixed to a coffee cup or ironed to the front of a T-shirt. All of which is to say that, yes, Virginia, you can buy a Peter Doig tie and Peter Doig scarves in the gift shop of the Montreal Museum of Fine Arts. The tie goes for $74.99, the scarves for $166.99.

Merchandise, though, wasn't much on Doig's mind the other day as he strolled the MMFA in a puffy ski parka and jeans. He was tired, weary-looking, having caught an early-morning flight to Montreal from New York where he'd spent the last two weeks in a studio in Tribeca.

"I was working on some paintings and hoping to bring one of them here," he said, his voice accented by a slight mid-Atlantic burr. "But then I had to realize there was no way I was going to be ready."

Now it was time to throw himself into preparations for No Foreign Lands, his much-anticipated retrospective opening Jan. 25 at the Montreal musée. It's a big show as well as a historic one – more than 40 oils, large, idiosyncratically colourful, elusively atmospheric, painted on canvas and linen, complemented by preparatory pieces, sketches and smaller works dating from 2002 to the present.

At 54, Doig is one of the most talked-about and praised artists in the world, his work housed in many prestigious public and private collections. Last year two Doigs, both painted in the 1990s, sold at auction in London for, respectively, $10.5-million and $12-million. Montreal currently has bragging rights as the sole North American venue for No Foreign Lands, which recently ended a three-month berth at the Scottish National Gallery in Edinburgh, Doig's birthplace. Indeed, the last significant Canadian Doig show, a tour of public galleries in Ottawa, Toronto and Vancouver, was in 2001 while his penultimate retrospective, in 2008, lapped just European institutions.

Montreal holds a special meaning for Doig: It was here in 1966 at age 7, as one of what would be four siblings, that he came with his mother and father, a Sri Lankan-born Scots accountant, from Trinidad, their home since 1960. Later the family moved to Quebec's Eastern Townships, where Doig became an enthusiastic skier, skater and hockey fan, followed by another move in 1974 to Toronto. Decamping for London in late 1978, Doig proceeded to worm his way into art schools there, "ducking and diving and living on the cheap for many, many years," before circling back to Montreal in 1986 for what proved an almost three-year stay.

Architect Frank Gehry, Toronto-born in 1929, likes to call the Art Gallery of Ontario "the place he first discovered art as a child." The MMFA, in particular the majestic 1912 neo-classical Hornstein Pavilion across from its modern Sherbrooke Street headquarters, is Doig's equivalent. Indeed, says Stéphane Aquin, MMFA curator of contemporary art, it was Doig who requested his retrospective be hung in the now-102-year-old MMFA he once visited as a youngster, accompanied sometimes by his father, an amateur painter. (The Gehry analogy can only be carried so far, however: The AGO, renovated by Gehry in 2008, stands as a testimony to the architect's art whereas the MMFA as yet has no Doigs in its permanent collection.)

The Montreal retrospective is dominated by paintings set in or inspired by the land and seascapes of Trinidad. The Caribbean nation, which gained independence in 1962 when Doig was a three-year-old living there, has been the artist's primary base since 2002, following 12 years spent (mostly) in London, where a nomination for the Turner Prize in 1994 secured his fame and reputation. The notion of home is a slippery one for the artist, given the rather nomadic nature of much of his life. "I guess I do feel at home in many places," he said. "But that may be just my particular understanding of home, having never spent much time in one place. So it's hard for me to know what home is in terms of a neighbourhood, a town, a city…. I mean, I don't really feel like a Trinidadian, although my children [they number five] do."

Doig suggested that the title for the retrospective, from a declaration by the 19th-century novelist/sojourner Robert Louis Stevenson ("There are no foreign lands. It is the traveller only who is foreign"), should be taken with a grain of irony. "Of course, there is such a thing as foreign lands," he declared. "Stevenson's attitude was, 'Step forth, people; enjoy travel; be inquisitive.' But for many people there are foreign lands; even for myself, I know what it means to be a foreigner."

At the same time, little seems foreign or alien when it comes to Doig's art. The Montreal show is a perfect encapsulation of his magpie-like propensity for plucking and using a dazzling array of art/historical references – Gauguin in Tahiti, Hockney in California, Matisse circa 1913, the Abu Ghraib photographs, Whistler's nocturnes, Rousseau's jungles, Daumier, Munch, Frederick Varley, Diebenkorn, Emily Carr, Goya, R.B. Kitaj – while producing a picture that is at once unmistakably Doigian and an affirmation of painting's relevance in a mixed-media universe.

The Trinidad pictures are markedly looser, more open and less "cross-hatched" than the so-called "Canadian-motif" paintings like White Canoe (1990) and The Architect's Home in the Ravine (1991) that have made Doig an auction darling. "I kind of wanted to get away from the thicket effect, the looking-through, all those layers, because I thought it was becoming a mannerism," he explained. "I wanted to make paintings that didn't rely on a kind of obvious materiality of paint and the fetishism that goes with that. I think a lot of people like paintings with large amounts of paint on the surface and I question that.

"As an artist, or at least for me," he continued, "you're always trying to escape or wanting to escape your own work or at least your mannerisms and find something new…. A lot of Matisse paintings look sort of underdone or unfinished but there's a life to those paintings that doesn't exist in those works that seem so complete, closed in on themselves and finished." He laughed. "Then again, you don't want to see that become a mannerism either."

When Doig attends a show like the one in Montreal, he claims it is, in part, because "I'm looking at the paintings for solutions for what I'm making now, for tips, really, for what I can resolve. Because, as is the case with many of the paintings you see here, they're started and then they're left and I get stuck and I go back to them. If I know it's a completely useless effort, I'll paint over it. Generally, though, there's something there I'll want to keep going and then I'll find a way, usually by working on another painting, or looking at someone else's painting."

Dorothy Parker famously said she "hated writing but loved having written" – a credo that resonates with Doig, who's been known to spend four or five years on a single canvas. "I have moments where I really enjoy painting, love it, in fact," he acknowledged. "But generally it's a frustrating activity. So much is not planned; so much is trial and error. A lot of the paintings are made in a state of duress somewhat, even desperation, the best ones anyway, and there's a lot of experimentation." He laughed again. "Really, it's a terribly frustrating way to work. But that's the way I do it because I don't really want there to be a formula."

Peter Doig: No Foreign Lands runs from Jan. 25 to May 4 at the Michal and Renata Hornstein Pavilion of the Montreal Museum of Fine Arts, 1379 Sherbrooke St. West.

Not bad at all: Multimillion-dollar near-record sale for artist Peter Doig
June 25, 2013 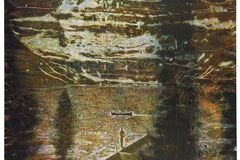 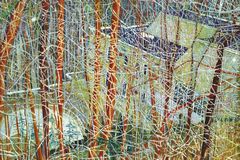 Peter Doig canvas gets good price at Christie's
May 15, 2009
Montreal builds its cultural brand - one piece at a time
March 2, 2012 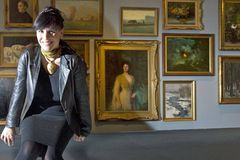