The red carpet at the Governor-General’s Performing Arts Awards last weekend was all about Tegan and Sara. The musicians were the celebrities to be tweeting about, feted as recipients of the National Arts Centre Award, which recognizes extraordinary work in the previous year.

As increasingly prominent pop stars and queer activists, the duo spent 2017 reinventing their pioneering 2007 album The Con. They toured new acoustic arrangements of the songs across North America and collaborated with 14 different artists whom they asked to cover their songs for a new album entitled The Con: X. Part of the proceeds will be donated to their personal foundation dedicated to helping LGBTQ girls and women. The pair have sold more than a million albums, won three Junos, been nominated for both a Grammy and the Polaris Prize, and garnered prizes for LGBTQ musicians in the U.S., U.K. and Australia.

As the federal government launched its review of the Broadcasting Act this week by naming an expert panel to the job and vowing that Netflix, YouTube and Spotify could no longer freeload on the Canadian system, it’s worth remembering what that system has achieved. In geopolitical terms, Tegan and Sara are what you call soft power: They tour Canadian values of creativity, diversity and tolerance around the world. But what fans love is the music (and onstage sibling banter) from an act that brings an indie sensibility to achingly personal lyrics, matched with what has become an increasingly mainstream electro-pop sound.

Accepting this most recent honour, they thanked the “Canadian artistic institutions” that helped launch them, but in truth, it’s always hard to measure how much Canada’s cultural supports have cemented the career of any one individual star. What you can say is that Tegan and Sara have benefitted greatly from getting their start in a country with a strong music industry that is firmly rooted in the North American market – and that industry owes its existence in part to the cultural regulations that have nurtured it since the 1970s. Industry insiders will often tell you Canada punches above its weight internationally; in 2017, two Canadian musicians, Drake and The Weeknd, were on the top 10 list of global recording artists.

Today, terrestrial radio is proving a hardy beast in the face of competition from digital radio and streaming services, but it is still possible to conceive of the Canadian music industry without the Canadian content regulations that guarantee a certain amount of domestic music on those old-fashioned airwaves. Canadian music is well established with the fans, and extracting fair compensation for artists from YouTube and the streaming services is a far larger issue for the industry.

On the other hand, it is much harder to conceive of what Canadian television would look like if broadcasters were freed from the imperative to devote about half the programming day to Canadian material. Most Canadian genres – with the exception of sports and reality/lifestyle programming – don’t make money for the networks. If they weren’t required to air it and the independent producers weren’t funded to make it, could Canadian broadcasters really continue to survive in the age of internet television merely as rebroadcasters of American shows?

In reality, the government’s new panel probably won’t have much time to consider these existential questions as it wrestles with the details of an incredibly tricky assignment: It has been told to consider how the government can ensure all players – that would include Netflix, Spotify, even Facebook and internet service providers too – contribute to the system while still promising consumers that prices for online services and internet access don’t go up. Whatever it recommends, the government will probably wind up horse-trading production and promotion commitments in exchange for no direct regulation: think the Netflix deal Minister of Canadian Heritage Mélanie Joly announced last fall but (here’s hoping!) more detailed and more enforceable. Cunningly, the government has given the panel 18 months to report back. That’s a tight deadline but one that ensures that no one will hear anything before the 2019 federal election.

By that time, Tegan and Sara should have another album out. ​ 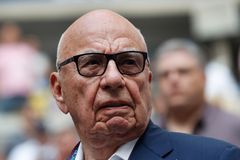