Springsteen, 71, pleaded guilty to the least serious of the three charges he was facing, drinking alcohol in a closed area, where it was barred. He was fined $540.

“Two small shots of tequila,” Springsteen said as his lawyer, Mitchell Ansell, led him through his guilty plea during the hearing, which was conducted over a videoconferencing app.

“Mr. Springsteen, I need to ask you how long you need to pay the fine,” said the federal magistrate judge, Anthony Mautone.

“I think I can pay that immediately, your honour,” Springsteen answered.

“The defendant would be considered presumptively not impaired,” the assistant U.S. attorney, Adam Baker, said during the 22-minute hearing.

The National Park Service ranger who arrested Springsteen had said in an affidavit that the singer-songwriter refused an initial breath test after he was stopped on his motorcycle on Nov. 14 near the Sandy Hook Lighthouse in New Jersey.

“That test is not required by law,” Baker added, “and he did submit to the legally required breath test when he was at the ranger station.”

Mautone went further, noting that even if Springsteen had agreed to the initial test, it would not have been legal to admit the results as evidence.

Springsteen, one of the most celebrated popular musicians of his generation with 20 Grammy Awards, was arrested after the ranger witnessed him drink a shot of Patron tequila in a national park along the northern Jersey Shore, Gateway National Recreation Area – a fact that Springsteen admitted during the hearing.

It was a warm and sunny Saturday afternoon, and Springsteen, who was riding his Triumph motorcycle, had stopped to talk to fans near the lighthouse in the park, a favourite haunt that has provided the backdrop to one of his album covers, a music video and a short film.

The officer wrote in a probable cause report that the musician smelled “strongly of alcohol” and was “visibly swaying back and forth.”

Before the government dismissed the charges, Springsteen, through his lawyer, pleaded not guilty to drunken driving and reckless driving, both of which are punishable by as much as $5,000 in fines and six months in prison.

A spokesperson for Gateway could not be immediately reached for comment.

Springsteen appeared on video about 10 minutes before the start of the hearing, seated next to Ansell. The musician, known worldwide as the Boss and most often seen sporting jeans and cowboy boots, wore a dark-colored suit jacket and a blue Oxford-style button-down shirt.

There was some light banter as court officers admitted members of the public into the virtual hearing.

Springsteen smiled as Mautone asked about a California address in the arrest documents, which, the parties agreed, might be related to the registration of Springsteen’s motorcycle. Springsteen, a revered son of New Jersey, grew up in Freehold and lives with his family in Colts Neck, about 20 miles from where he was arrested.

With seven minutes remaining before the start of the hearing, there were 126 spectators on the video call. Mautone made clear that public access to the proceeding would be closed promptly at 11 a.m.

“I don’t want everybody and their mother,” he said.

The hearing was an event unto itself.

The Asbury Park Press, named for the Jersey Shore town that was both a muse and a crucible for Springsteen’s early music, was providing live updates.

A podcast, “New Jersey Is The World,” produced a special episode dedicated to what it presented as the ultimate indignation: arresting the Boss on his home turf.

Still, the hearing itself was a staid, if slightly surreal, event. All federal courts have been closed in New Jersey since the start of the pandemic in March, and judges have been holding all hearings by video conference.

The Park Service did not disclose Springsteen’s DWI arrest, an omission that was condemned by Mothers Against Drunk Driving, a national advocacy organization.

Details about the charges were instead leaked to TMZ, an entertainment website, days after Springsteen appeared in a Jeep ad during the Super Bowl. It was his first commercial ever, and he was shown driving a white Jeep beside snow-swept fields in one of the most-watched ads of Super Bowl LV.

Jeep, which had lobbied for years to persuade Springsteen to appear in a commercial, pulled the ad from its social media sites hours after his arrest became public, and in a statement suggested that the company had not been told about the pending criminal case.

“Its message of community and unity is as relevant as ever,” a company spokesperson said this month in a statement. “As is the message that drinking and driving can never be condoned.”

Video of the ad, and the script that Springsteen recited – a lyrical call for a divided country to reunite “in the middle”– remained on prominent display Wednesday on the musician’s Instagram page.

The dismissal of the charges comes in the same week Springsteen released a new podcast, “Renegades: Born in the USA,” with former President Barack Obama.

Dan Fierman, the head of Higher Ground Audio, a company that produced the podcast and was founded by Obama and his wife, Michelle, has said that news of the arrest had not affected plans to release the podcast or its content.

The charge that Springsteen pleaded guilty to – use of alcohol in a closed area – is a bit of a sore subject in New Jersey. Until April 2019, Sandy Hook was the only public beach in New Jersey where drinking was permitted, a fact that Mautone alluded to during the hearing. (Sandy Hook also has the state’s only public nude beach.)

The National Park Service made drinking illegal in the park two years ago after a spate of alcohol-related incidents.

In a statement released after the hearing, Ansell noted that the musician had “no previous criminal record of any kind.”

“Mr. Springsteen is pleased with the outcome of today’s court appearance,” he said. 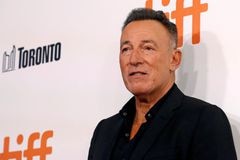