It was always a wrenching experience watching, listening, feeling Brent Carver perform on a stage.

The Tony Award-winning Canadian actor, who died Aug. 4 at 68, could leave you emotionally wrecked with a single song or speech, in musical theatre as in Shakespeare as in new plays; he had a unique, otherworldly presence that aided him in his portrayals of anguished outsiders.

Mr. Carver had a way of tip-toeing puckishly along a lyric or a line of iambic pentameter – and then suddenly, on a dime, planting himself and pulsing with such an intense vulnerability that it almost made you have to look away.

The director Des McAnuff expressed the magnitude of this collective cultural loss simply and succinctly when I spoke to him on Thursday as the news of Mr. Carver’s death became public: “He’s certainly not replaceable.”

“He had a wonderful, aloof quality onstage which was really charismatic,” recalled Mr. McAnuff, a former artistic director of the Stratford Festival. “His work was at once sensitive and dangerous. He was a shy rock star.”

That paradox that was Mr. Carver in performance – how he could seem so fragile, wounded, on the brink, and yet was out there on stage commanding attention night after night – led to dozens of turns that could be remembered as career highs.

He won wider fame and his Tony Award for playing the imprisoned Argentine window dresser Molina in John Kander and Fred Ebb’s Kiss of the Spider Woman in Toronto, London and then in New York in 1993 – and returned to Broadway to originate the role of the persecuted Jewish American Leo Frank, and earn another Tony nomination, in Jason Robert Brown’s Parade in 1998.

Mr. Carver’s nine seasons at the Stratford Festival, scattered between 1980 and 2017, allowed him to leave an original stamp on iconic characters from Hamlet (in both Hamlet and Rosencrantz and Guildenstern are Dead in 1986) to Tevye (in Fiddler on the Roof in 2000).

He brought the full weight of his tortured talent to bear playing gay men in extremis in Martin Sherman’s Bent (1981, for which he won a Dora Mavor Moore Award) and in new Canadian plays that became modern classics such as Brad Fraser’s Unidentified Human Remains and the True Nature of Love (1989) and Timothy Findley’s Elizabeth Rex (2000), which was filmed and broadcast on television.

But even audiences who got to see Mr. Carver’s performances only in this century never felt like they had missed the best of what he had to offer.

For me, his performances in 2010 at the Stratford Festival left me twisted up inside – as he demonstrated how to pack the emotional power of an entire play into a speech or a song.

No one ever delivered the Seven Ages of Man from As You Like It with as exquisite a melancholy as Mr. Carver did that season under the direction of Mr. McAnuff, playing Jaques as a sad alien dressed in a suit and bowler as if summoned from a painting by René Magritte. “He managed to channel something about his own soul in that performance,” the director said.

That same season, in Jacques Brel is Alive and Well and Living in Paris, directed by Stafford Arima, Mr. Carver vibrated his way through chansons in English, French and Flemish – and I marveled at the way he could bring tears to his eyes with just a note or a thought.

(That was a triumphant return to the starting line for the B.C.-born actor, whose career began in Vancouver with the Arts Club Theatre’s production of Jacques Brel in 1972.)

Mr. Carver could somehow even seem persecuted when playing a persecutor: As Pontius Pilate in Jesus Christ Superstar in 2011, he seemed to crucify himself in the song Pilate’s Dream.

He declined to accompany that McAnuff/Stratford Festival production back down to Broadway. Of course, Mr. Carver famously almost did not make it there in the first place with Kiss of the Spider Woman.

While he impressed Livent producer Garth Drabinsky and director Hal Prince in his audition for Molina, Mr. Carver was originally cast as the understudy to The Waltons’ Richard Thomas in the role – and only when Mr. Thomas dropped out did the two decide to elevate the actor, even though he had no marquee value at the time in the United States.

“I said to Hal, ‘Sometimes things happen for a reason. … Brent is perfect for the role,’” Mr. Drabinsky recalled on Thursday.

“He took a tremendous number of chances as a performer to find the deepest parts of that character – and, course, it led to a resounding response for his work. ... He was a towering talent.”

Born in Cranbrook, B.C., Mr. Carver died there as well, on Aug. 4. His family did not immediately release the cause of death. He leaves his sisters, Vicki Stanley and Frankie Reekie, and brothers Randy and Shawn. A private family memorial is set for Monday; a public celebration of his life will take place at the Stratford Festival when public health conditions allow. 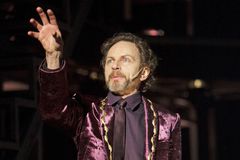 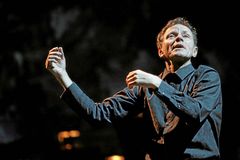