Billions and Homeland star Damian Lewis will portray the late Toronto mayor Rob Ford in a film called Run This Town, but writer-director Ricky Tollman says it’s not a biopic.

Ford is actually a fairly minor character in the story of a young wannabe journalist and other millennials who struggle to make a living in a post-recession economy, Tollman said Tuesday in a telephone interview from the film’s Toronto set.

Tony Award-winning Dear Evan Hansen star Ben Platt is cast as a bumbling newsroom intern who wants to break the story on the Ford crack-smoking scandal – but is several steps behind other reporters.

“This isn’t the Rob Ford story, this is a story about people that I know and people I grew up with and a generation of people,” said the 32-year-old first-time director, who noted the Ford character is only “in a few key scenes and a few key moments.”

He added that he wanted to create “a sympathetic portrait” of Ford and his tumultuous time in office before he died in 2016.

“I didn’t want to portray Rob in a way that people already imagined him, or in ways he’s already been portrayed in the media.... I think Rob isn’t just a caricature, he’s a person and he’s a human, he had two children and a wife and a family, and he cared very deeply about the city he was the mayor of. And this was a guy with demons,” Tollman said.

“I wanted to show a side of him that people forget about.”

In terms of tone, he described the film as “a drama with moments of comedy and levity in it.”

“I wouldn’t classify it as a comedy, it’s not Knocked Up or The 40-Year-Old Virgin. I think it uses comedy in the same way that something like The Big Short uses comedy, to tell a story about people at a place in time that people remember.”

Tollman said he was thrilled to recruit Lewis to portray Ford, calling him “one of the most talented actors working today.”

“I thought that this is a guy that can play the moments of darkness and depth but can also play the lighter moments. Rob was a guy that was elected because people wanted to grab a beer with the guy, you know?” said Tollman.

“He took to the idea that this wasn’t a one-dimensional version of this character.”

The film, which just began production and has no estimated release date, also features a number of Canadian actors including Nina Dobrev, Mena Massoud and Scott Speedman.

Tollman said he was taken aback by the early response to the film based on assumptions that it would be a true-to-life story about the reporters who covered Ford.

Globe and Mail reporter Robyn Doolittle, who covered the Ford saga for the Toronto Star and wrote the book Crazy Town: The Rob Ford Story, tweeted “I’m glad they’re rewriting the fact that it was a female reporter who investigated Rob Ford. Why have a woman be a lead character when a man could do it? Ammaright?”

In a subsequent tweet mentioning Platt, she said she did not begrudge him for his role in the film but was upset “just about the move in general: obviously I’m biased, but man, I’ve seen a lot of stories by male reporters celebrated in movies.”

Hours later, after some media outlets posted stories suggesting “Run This Town” would depict Doolittle’s story but with a male actor, Platt responded on Twitter saying “the film does not attempt to co-opt her narrative.”

“That in and of itself is an incredibly worthy and fascinating story but it’s not the one we are telling, nor would I ever agree to be a part of a film that would attribute the accomplishments of a remarkable woman to a fictional man,” Platt wrote.

Tollman added that Platt’s character isn’t based on anyone at “the Toronto Star, or the Globe and Mail, or Gawker, the people who were really on the case, this isn’t their story.”

“It was a surprise to me (that) people took three words out of the description of the film and spun it into something that it’s not, without having read the script,” he said. 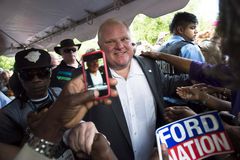