“It was a bit of a shocker,” composer Mike Ross says. When this year’s Dora Mavor Moore Award nominations for Toronto theatre were announced on May 28, Rose, the new family musical he co-wrote with lyricist Sarah Wilson for the Soulpepper Theatre Company received 11 – the most of any single production. 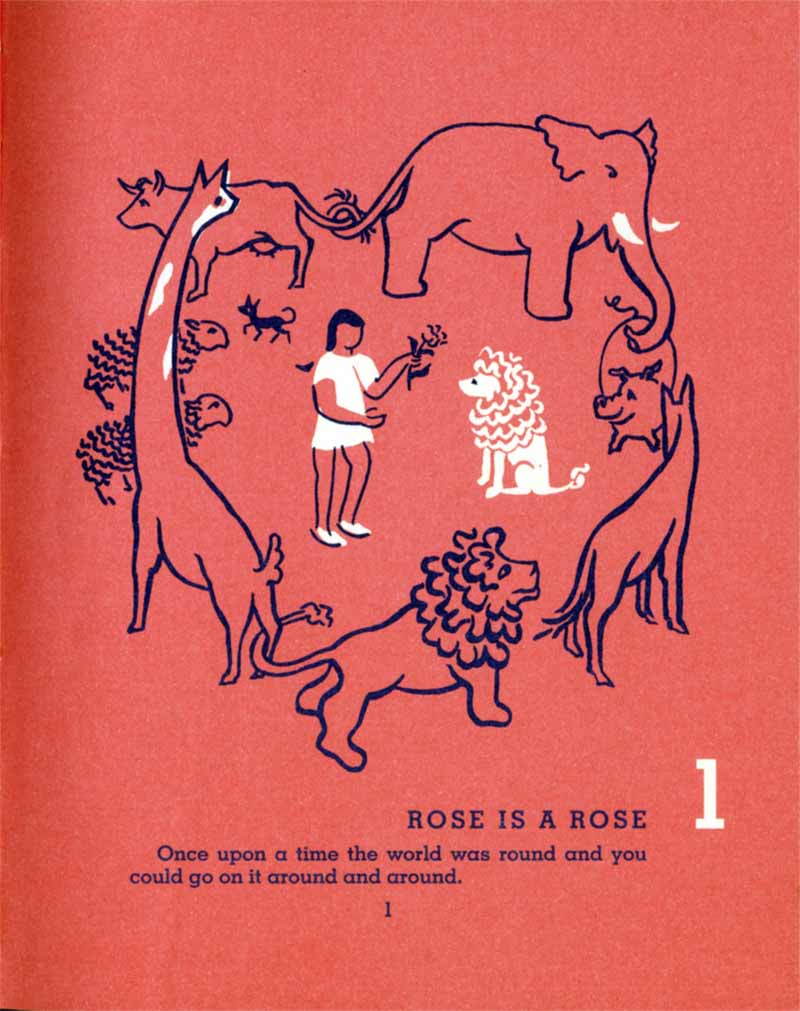 The World is Round by Gertrude Stein, the inspiration for Rose.

Not bad for a whimsical story based on an obscure Gertrude Stein text, with a nine-year-old heroine, a singing dog and banjo-picking lumberjacks. Especially in a year when the musical competition includes the much-ballyhooed Canadian premiere of the Broadway Tony Award winner Dear Evan Hansen. It garnered nine nods.

Whether or not Rose wins a slew of prizes when the Doras are handed out on June 25, the recognition alone is valuable, Ross says. “The important thing for us is that the show has a future, and these things help. When it comes time to take the next step, pitch it to other theatres, we can say, ‘An independent body has deemed this something to get excited about.’ We’re grateful for that.”

Ross, dressed all in black and rocking his charmingly scruffy look, is chatting across a boardroom table in the Soulpepper offices, at Toronto’s Young Centre for the Performing Arts. The Charlottetown native is at the tail end of a long day auditioning musicians in his role as the theatre company’s director of music.

Wilson, casually cool in a faded jean jacket, is sitting a couple of chairs over. She seems remarkably well rested – heck, buoyant – for a woman who just gave birth three weeks ago. She and husband Lorenzo Savoini, Soulpepper’s director of design, had their second child, Jacob, late in May – a little brother for six-year-old Roman. “The second one is so much easier,” Wilson attests with a grin. “You know what you’re doing.” Even if Jacob surprised his parents and showed up three weeks early. In fact, we’re doing this interview on his due date.

Ross is a dad himself – of Sophie, 7, and George, 4 – which helps explain why he and Wilson chose an all-ages vehicle for their first collaboration, one that also happens to be Soulpepper’s first original musical. It’s something the company had been moving toward for years, through its musical settings of poetry by the likes of e.e. cummings and Dennis Lee, which culminated in the smash success of Spoon River, a rousing adaptation of Edgar Lee Masters’ Spoon River Anthology. That show, composed by Ross, won the 2015 Dora for outstanding new musical and was a New York Times Critic’s Pick when it played off-Broadway in 2017.

Rose, however, went a step further, into traditional “book musical” territory, with a book (that is, script) loosely adapted from Stein’s children’s tale The World is Round and original songs by Wilson and Ross. And while it seems a logical progression, the pair had no idea that’s where they were headed when they began.

It all started when Wilson came across a 75th-anniversary edition of Stein’s book – a rare foray by the avant-garde author into children’s literature – which was originally published in 1939 with illustrations by the beloved Clement Hurd of Goodnight Moon and The Runaway Bunny fame. The story of Rose, a young girl in a small town who embarks on a quest to find her identity, it boasts Stein’s famous repetitive prose and a striking design of blue drawings on pink paper.

“It was so strange and interesting … and pink,” Wilson says, laughing. “So, I started looking through it and it just seemed to have a kind of sound, a musical feeling to it. We might have picked something with a more traditional storyline,” she admits, “but this had its own rhythm and its own musical life baked into it that made you want to splash around in it.”

Wilson brought the book to Ross and, at first, they considered doing something modest with it – a chamber musical perhaps, or a song cycle. But as they dug into the quirky text, they realized it had greater potential.

“The idea of a little girl trying to figure out who she is in this world today became a bigger and bigger story in my head,” Ross says. “The scale of it grew because of the universality of its theme – trying to discover who the real ‘you’ is and to live that way. This girl goes on a journey on behalf of all of us who also don’t know who we are and bravely goes out into the unknown to figure that out. It became inspiring and that propelled us to keep going.”

Wilson and Ross added new characters and used Stein’s own poems in the book as a jumping-off point for the songs. Taking a cue from the story’s mountain setting, they came up with a trio of lumberjack-narrators, which also gave the show a musical peg.

“We used as a reference point The Log Driver’s Waltz,” Ross says, referring to the jaunty Canadian folk song-turned-National Film Board cartoon. “It just felt very true, the combination of this magic, ethereal, sparkly quality that the book has, with this logger trio. That was so wacky, it opened the door to other styles of music to use here and there.”

Working with Soulpepper’s resident ensemble allowed Wilson and Ross to craft roles with specific actors in mind. In writing Rose’s songs, they took advantage of singer-actor Hailey Gillis’s wide vocal range. The part of Willie, Rose’s high-spirited friend, was tailored to the comic talents of Peter Fernandes. “There are jokes where you’d think, ‘Peter knows exactly how to do this!’” says Wilson, an actor herself. “It’s that shorthand you get from working with people you’ve worked with many times.” 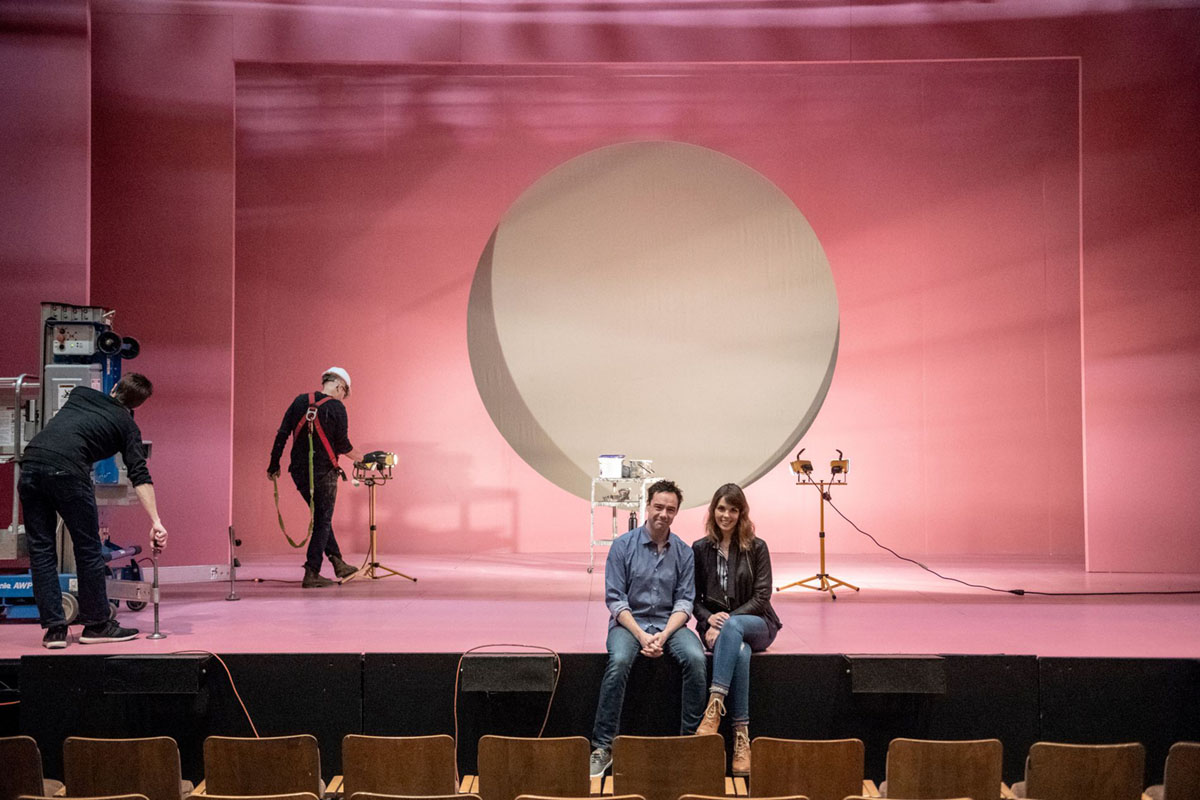 Ross and Wilson met as members of the inaugural Soulpepper Academy.

At the same time, Ross notes, company newcomers added something special to the mix: “Sabryn Rock brought such an original and funny energy to the role of the schoolteacher that I didn’t even know was there.” Rock, Fernandes and Gillis are all nominated for Doras for Rose. So is Savoini, who provided the show’s Hurd-inspired design, and Ross got an additional Dora nomination for his musical direction.

Although Ross and Wilson have known each other since 2006, when they met as members of the inaugural Soulpepper Academy – the company’s professional training program – they hadn’t worked together as writers prior to Rose. Now they’ve become a team, most recently collaborating on Soulpepper’s themed concerts. Currently, along with Esther Jun, they’re creating one that pairs the writings of American novelist John Steinbeck with such like-minded tunesmiths as Bruce Springsteen, Nina Simone and Bob Dylan. Called The Promised Land: Steinbeck Through Song, it will run from July 12 to 27.

Nor are the two finished with Rose. The show, which received mixed critical reviews, is still a work in progress. “You learn so much from watching it,” Wilson says. “You see what you want to delete or add to it.”

Ross says Soulpepper is talking about mounting it again. “The Dora nominations are great, but the response from the audiences who saw it was really something else,” he says. “It brought out a lot of families, which is not our bread and butter as a company, so this show is new territory in a way. It’s exciting but it takes time to build, so I look forward to giving it another go. It’s like my kids at the beach, they build this trough in the sand and pour the water into it to make it flow a certain length. Then they extend it further. With this show, we’re still building that trough.”

The 40th Anniversary Dora Mavor Moore Awards will be presented on June 25 at the Sony Centre for the Performing Arts in Toronto.