Musthafa Azeez
Published May 22, 2021 Updated May 22, 2021
Comments
Text Size
Please log in to listen to this story. Also available in French and Mandarin. Log In Create Free Account

Between April, 2019 and March, 2020, the Canada Council for the Arts gave a total of $263-million in grants to 2,138 organizations, 456 groups and 3,258 artists. Stand-up, sketch and improv comedians received none of this funding – unless they were able to qualify under another category. That, the Canadian comedy community points out, is no laughing matter.

Canadian comedians argue that the Canada Council does not recognize comedy as an art form. The council, in turn, states that those working in comedy can indeed apply for grants. Turns out both points are true – and that’s where the crux of the issue lies.

“Even though they say we can apply for grants, we can’t get past the portal,” says veteran Toronto comic Sandra Battaglini.

When applying for a Canada Council grant online, artists have to identify themselves as belonging to one of 11 fields of practice, including: circus arts, dance, deaf and disability arts, digital arts, inter-arts, literature, media arts, multidisciplinary activities, music and sound, theatre and visual arts – leaving out many in the comedy world whose work may not fit into any of those categories.

In 2017, Battaglini formed the Canadian Association of Stand-up Comedians (CASC) in an attempt to get comedy recognized as a distinct artform. Such a designation would allow hundreds of stand-up, improv and sketch comedians to receive grants to support their artistic endeavours.

Battaglini says she and other CASC members have been invited to discussions on the issue – during one such exchange, she recalls, they were told the Canada Council “doesn’t see stand-up comedy as art – they see it as entertainment, much like sports.”

A statement provided by the Canada Council said that while stand-up, improv and sketch comedy don’t have a dedicated field of practice in the Council’s framework, they can be included under a “broad definition of theatre or literature.” It added that the funding body also recognizes many comedians “have professional training and experience as theatre artists or literary writers,” therefore those working in comedy are “welcome to register for a profile at any time.”

“But a lot of comedians don’t have performance backgrounds or aren’t working in writing rooms,” notes Toronto-based comedian Nour Hadidi. “Some comedians can’t even afford to take an acting class.”

After nine years as a comic in Canada, Hadidi says she cannot understand why her art form has to be lumped in with other categories. “Why do we have to keep fighting for this? What do they gain by not recognizing it?”

Born and raised in Jordan, Hadidi earned a degree in finance from McGill University and worked in the industry before she began performing stand-up comedy in 2012. It took her five years after that to quit her day job, she recalls, adding that a grant would have helped make the transition much easier.

“I’m considered a successful comedian in Canada now,” says Hadidi, who writes for television, performs stand-up, appears on CBC Radio, does voice-acting gigs and just booked her first TV role. “I do it all, and [yet] I don’t know how I’ll make money in a year.”

The lack of support for the Canadian comedy sector extends beyond grant funding. Jim Carrey, Norm Macdonald and Russell Peters are but a few of the household names that got their start in Canada before going south of the border to build their careers – which many homegrown comics feel might be their only real chance at a breakthrough.

In the documentary Mayor of Comedy, produced by Battaglini, immigration lawyer Tim Golden lays out the series of steps Canadian comics have to take to try to make a go of it in the U.S.

Each comic has to prove through documentation such as press coverage that they are “in the top 1 to 2 per cent” of their field. Otherwise, they can cite a major deal with a U.S. company. They need a sponsor in the U.S. who will petition on their behalf, and who has to prove that the comic has “a roster of engagements,” such as club and festival bookings around the country. The entire process can cost a comic roughly $10,000 and take several months at least – not to mention that all those regulations change periodically.

By contrast, American comics pay less than $200 for a work permit to perform at Canadian clubs and festivals, Battaglini says.

The issue of Canadian comics crossing the border came up during the 2017 NAFTA negotiations. Government officials were keen to update the list of 60 occupations in which Canadians can get work permits and visas more easily, and the hope was that comics would be added to that list.

But instead, the status quo was maintained. When Battaglini asked Global Affairs Canada why the government didn’t insist on the labour mobility issue, she says she was told they didn’t want to raise the issue of cultural exemption.

In theory, the idea is for Bell Media and other Canadian media companies to broadcast homegrown content. But a cursory look at CTV Comedy Channel’s schedule on any particular day reveals the bulk of programming is re-runs of American sitcoms and talk shows, with some Corner Gas and Just for Laughs thrown in.

Battaglini believes there’s a simple reason why there is so little homegrown comedy content in Canada. When pitching ideas for sitcoms, she often hears that she should sell it in the U.S., because it’s cheaper for Canadian broadcasters to buy shows directly from their networks.

While it’s no doubt less expensive to fill a TV schedule with hit sitcoms from the past, the benefits of producing original comedy content isn’t hypothetical. The Canadian Media Producers Association reported in 2018 that Mr. D, the TV series created by Canadian comedian Gerry Dee and produced by CBC, had generated $126.5-million over the course of its eight seasons – not to mention creating 1,425 jobs in the process.

Jean Paul, a veteran comic from Toronto, lists a string of now-famous comedians who’ve left Canada over the years: “Catherine O’Hara, Martin Short, Jim Carrey, Mike Myers, Eugene Levy, John Candy, Will Arnett, Seth Rogen, Lorne Michaels… I wish we wouldn’t have to leave the country and then have everyone say, ‘Oh, we lost another one!’” he says.

Despite his frustration with the lack of support for his art form in Canada, Paul, who’s spent 25 years as a stand-up comic and performed all over the world, insists he’ll continue to develop his craft at home. “Why do I have to leave in order for me to have some kind of legitimacy?” he asks.

Grants would help comics like Paul and Hadidi produce comedy albums – which not only provide a source of income, but help cultivate a fan base. In turn, that following often makes it easier to get television shows greenlit by Canadian broadcasters. When comedy clubs post recognizable names on their marquee, more fans flock to fill the seats, and in turn discover emerging comics.

Currently, none of that happens in the Canadian arts ecosystem, forcing Hadidi to contemplate having to relocate to New York or Los Angeles. She loves Canada’s diversity and believes she can contribute to its growth, but doesn’t believe the situation will change any time soon.

“Just like musicians practise every day, stand-up comedians get on stage every night,” she says. “But maybe the setting in which we perform makes people think it’s less of an art form – the fact that it’s a bar and not an opera house?”

For her part, Battaglini remembers asking audience members at her shows five years ago to sign a petition to get comedy listed as a distinct art form by the Canada Council. Their response was always the same.

“‘What? It’s not?’ Everyone was under the assumption that comedy was [already] recognized.”

Just For Laughs to blend online and in-person comedy for summer festival
Subscriber content
May 5, 2021 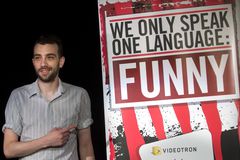 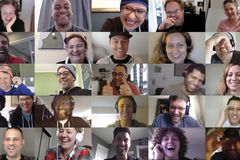