Larry King was easy to poke fun at, particularly late in his career at CNN: the pinched look, guffaws and Coke-bottle glasses, the suspenders and old-time microphone on the desk in front of him.

He was grandpa trying to dance to Drake at a wedding.

But at least grandpa tried, didn’t he? And if you sat down to talk with him, he could take you places with his words, and you would enjoy the journey. You’d certainly be sorry if he wasn’t there.

Hearing about King’s death Saturday at age 87 stirred a similar feeling. The Brooklyn-born King was a classic conversationalist, a throwback to a different era in showbiz and media even during the height of his on-air career.

For 25 years until 2010, “Larry King Live” was a fixture on CNN’s weeknight schedule, and that was after a lengthy career as a late-night radio host. King talked to politicians and musicians, the serious and the silly, not as a newsman but as anyone would if suddenly thrust into the room with a famous face.

Sometimes it felt that way; King would never be accused of over-preparing for an interview. Journalists at CNN gnashed their teeth at missed opportunities to show off their toughness and knowledge if they’d been in his place asking questions of premiers or presidents.

He described himself as a minimalist whose chief goal was to make his guests look good. “I ask short questions,” he said once. “I have no pretense at intellectuality.”

King could fill a blooper reel of gaffes that would have been fatal to the careers of lesser personalities. He mistakenly addressed Ringo Starr as “George,” and notoriously asked Jerry Seinfeld if it was his choice to leave his namesake sitcom or if the network had cancelled it.

“You’re not a reminiscencer?’ he asked Prince once.

“Is that a word, Larry?” Prince asked.

“I invented it,” King said.

While King may have sat down to talk to authors without reading their books, he did homework, said Tammy Haddad, his producer for the first eight years King was on CNN. And he wasn’t necessarily an easy inquisitor. Ross Perot didn’t intend to announce his candidacy for president on King’s show in 1992, but the host pressed him – both on the air and during commercial breaks – until he did, Haddad said.

He would make interview subjects feel so comfortable that sometimes they’d reveal more than they had intended, she said.

“Whenever you sat down in Larry King’s TV living room, you felt like you were just having a conversation with a friend and forgot that millions around the world were watching you,” singer Tony Bennett tweeted on Saturday.

“He’d be happy talking to a taxi driver,” Haddad said. “He came to each of them with the same level of interest.”

His connections brought in some big names: Marlon Brando, Elizabeth Taylor, Frank Sinatra in the last interview he gave before his death. King also had a penchant for fading B- or C-list stars, and few things gave him more pleasure than laughing with Don Rickles for an hour.

He was more than game enough to speak to a younger generation of stars, too, and took a souped-up ride with Snoop Dogg through the streets of Los Angeles.

“Larry King Live” was a type of show that would feel foreign on cable news today, given its obsession with hard-nosed political combat. Podcasts would now be the closest place to get something similar to what King offered, Haddad said.

“I think that’s one of the reasons people are so nostalgic about Larry,” she said. “They really got to know people (King interviewed) in a way that you just don’t have the opportunity to do any more.”

Among the personalities who took time Saturday to tweet memories and photos of themselves with King was filmmaker Kevin Smith.

“My dad always asked me, ‘Did you see who Larry King talked to last night?’” Smith wrote. “Would’ve blown his mind to know that one day, it would be his son. 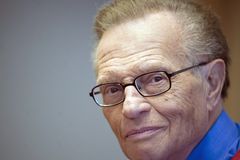 Larry King says he was operated on for lung cancer
September 13, 2017 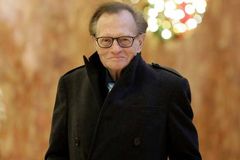