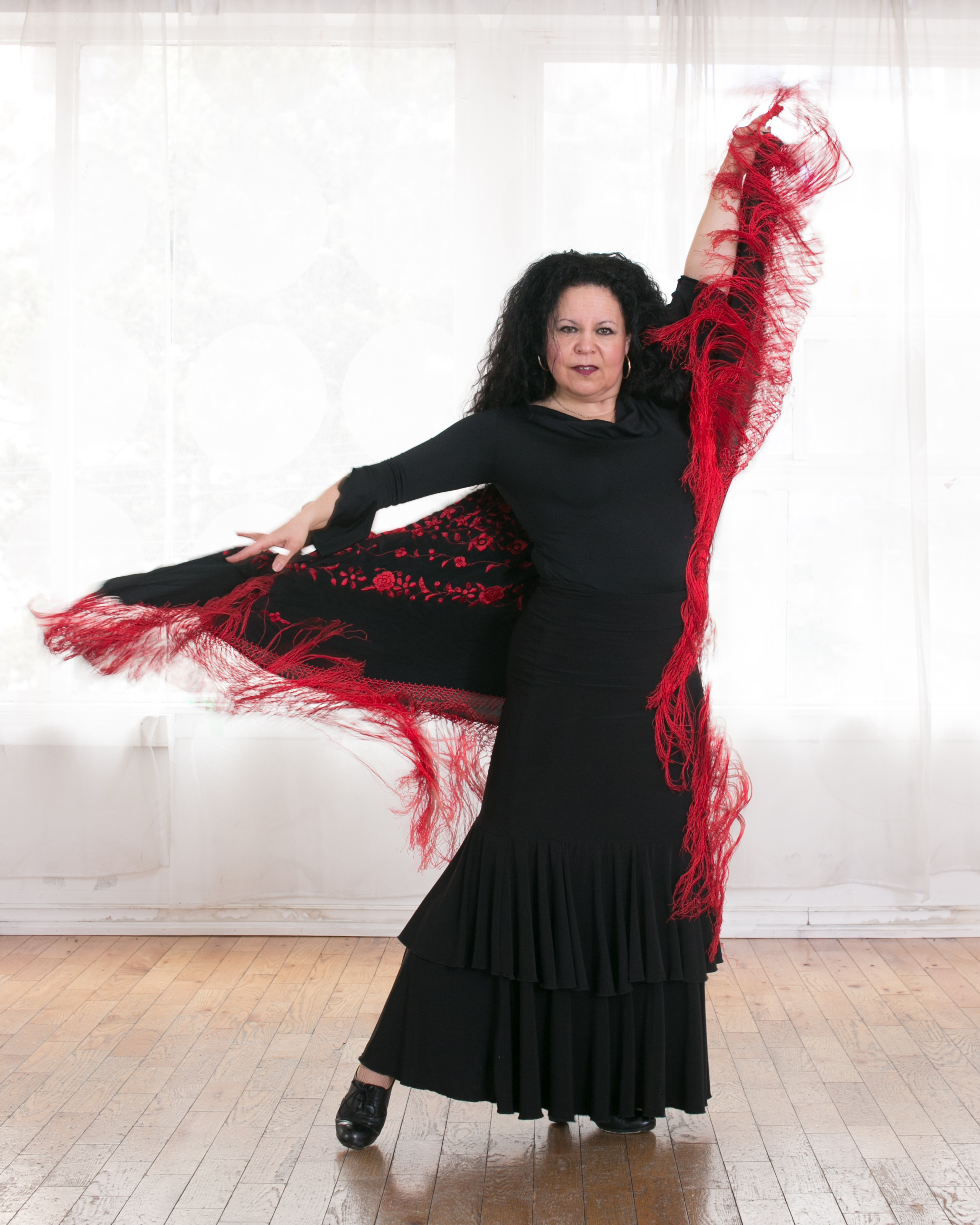 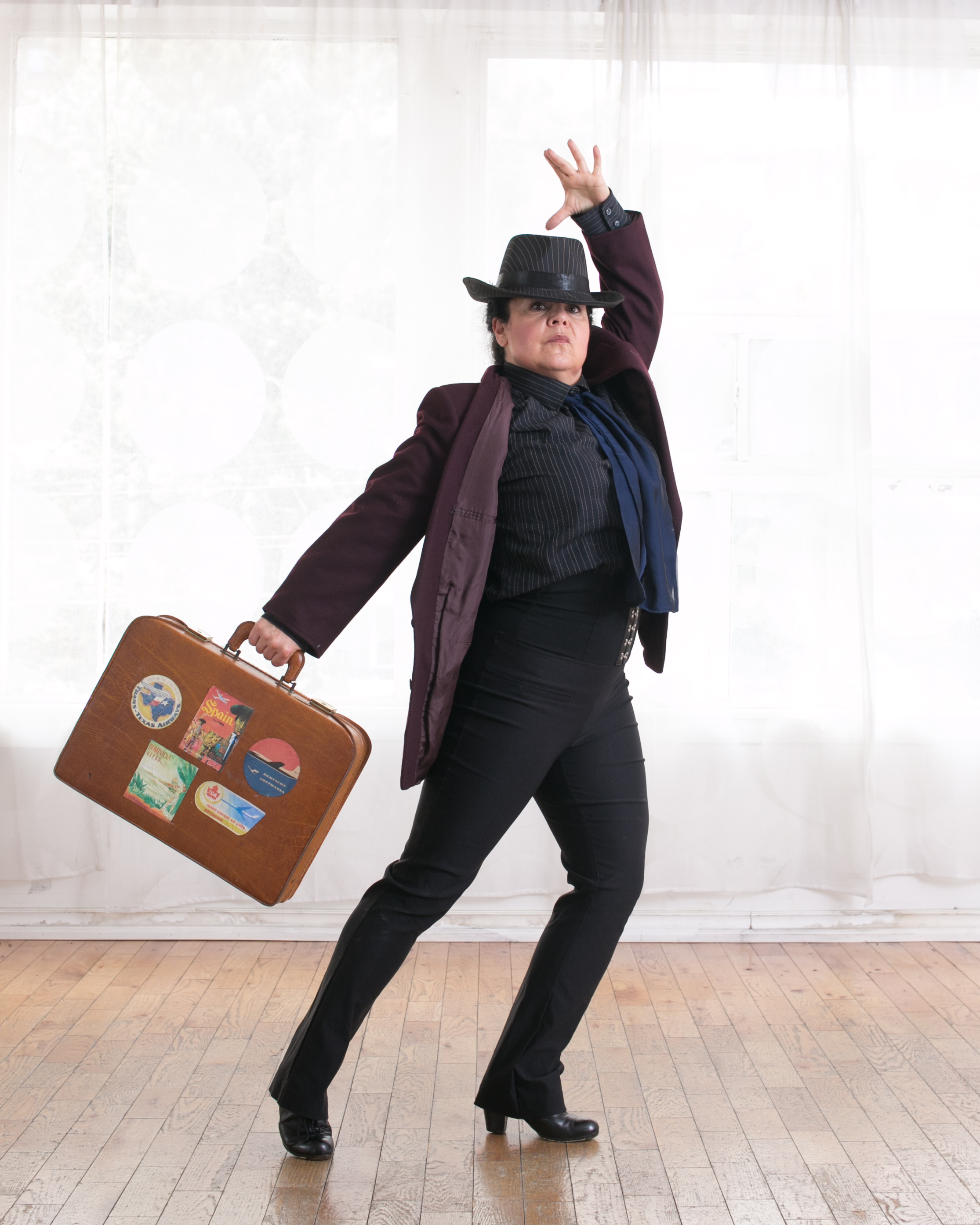 Slide the circle left and right to see Toronto dancer Carmen Romero transform into a character based on her father in her show Jacinto. (Glenn Lowson/The Globe and Mail)

The North Toronto dance studio, normally filled with the percussive batterie of flamenco, is silent one afternoon, apart from dancer Carmen Romero quietly telling a story she can hardly believe.

Sometimes her expression is that of a calm raconteuse, accented by restless waves of black hair. Sometimes a tear wells in her eye. Other times both eyes confront yours, as if in disbelief of the story she is telling.

It is about her father, who was both central to her life and yet a person, in some ways, she never fully knew. His death was the motivation for Jacinto, an hour-long flamenco performance piece in three acts which she choreographed and performed last spring at the Theatre Centre in Toronto. It translates her grief and loss and final sense of peace into the language of flamenco, but also her discovery of the multiple lives he lived.

“When I built this show, the first part was about reconciliation with his death,” she says. In the opening moments of the dance, she lies with her back on a small box, her face straining toward the audience, her torso bending back vulnerably. It’s an awkward position, almost as if confronting the audience in a dying state, as if both she and her father are dying together.

Her father, Jacinto Garcia Romero, was born in Spain. His father (Ms. Romero’s grandfather) had left home to fight during the Spanish Civil War. When he returned, he couldn’t find his family and assumed that they had been killed. He wound up moving to Seville where he eventually started a new life with a new family. Meanwhile, Mr. Romero grew up in the city of Jaen without his dad. “My father spent pretty much all of his life looking for his dad,” Ms. Romero says.

Mr. Romero later married a German woman, Ingrid, settled in Toronto and raised Ms. Romero and her brother Mario. It was a strict upbringing, but with an undercurrent of love, she says. But her parents later divorced, which was a wrenching separation that forced Ms. Romero to tread carefully when dealing with family matters.

“If we even mentioned my father’s name, it was bad,” she says. As a result, she largely separated herself from her father for many years. She saw him only a handful of times over the past 30 years, she says.

He left the family to live a peripatetic existence, partly in search of his family origins in Spain. A shroud of mystery surrounds those decades, along with a thread of cultural machismo running through his life, like his father’s, a guardedness. “You don’t show your emotions,” Ms. Romero says.

In the opening moments of Jacinto, Toronto-based dancer Carmen Romero lies with her back on a small box, her face straining toward the audience. The show is an exploration of her feelings and ultimate coming to terms with father’s death, and the opening act is about allowing the spirits of death inside her to fly away freely.

In the middle section of the dance, Ms. Romero herself plays her dad as a kind of unassuming everyman, yet also someone with secrets and a threatening edge. “It’s him being that really hard man protecting the little boy [inside him] that was so maltreated, so lonely, so looking for love. And when he had love, he didn’t know what to do with it,” she says.

As a mechanical designer specializing in pollution-control systems, Mr. Romero had also spent considerable time in the Dominican Republic where, they discovered, he had started another family, but much of his time there remains a mystery to them. He later divorced his second wife but continued to support that family, Ms. Romero says.

The details are murky. Ms. Romero feels she may never know the whole story. In Jacinto, she portrays her dad on a trip, being approached by various characters, including a temptress testing his affections. All the time, the assorted people on stage are trying to coax her father into opening his suitcase, symbolizing all the secrets he held close to his chest.

By the time he had reached his 70s, he finally found his relatives in Spain. This was in 2012. “My dad had finally found his father. However, sadly, my grandfather had passed away two years before that,” Ms. Romero says.

Mr. Romero had decided he wanted to move back to Spain to live with those Spanish relations. But it didn’t stop his longing. He continued to look for his original home, that sense of roots which he never felt he had, Ms. Romero says. “My dad was still searching for the very first home that he lived in.”

He succeeded in finding that, too, in 2014. He had wanted his daughter to join him, but Ms. Romero couldn’t, for that would be his last trip abroad. He died on the flight back from Spain, of heart failure, while travelling to his other life in the Dominican Republic. He was 77.

One night she came up with the opening scene of her lying on the box, a scene she especially connects with. “I came up with the idea in the middle of the night, and I came here [to her dance studio] at 1:00 in the morning, and was here to 4:00, playing with this idea.”

She was working on how to show the process of letting go through flamenco. “I could go along quite happily just denying this happened,” denying the emotions, she says. Instead, the opening act is about allowing the spirits of death inside her to fly away freely.

Later in the dance, she depicts the endurance test she faced in dealing with her grief and loss, depicted symbolically as a moment of ceaseless foot-tapping rhythm, her anguish translated into a barrage of flamenco beats.

Surprisingly, much of the actual dance is improvised within the otherwise choreographed scenes. “The only thing that guides me is the structure of the flamenco song and the music, and then the story that’s running,” she says.

“It is so cathartic for me,” she adds. The dance isn’t about dragging his story “through the dirt. It’s about really honouring the man that I wish I could have stayed closer to.”

The difficulty is that Ms. Romero not only portrays the father as she knew him, but also the different lives she and her brother came to discover. Her brother says, “My thoughts at the time, when I watched the actual performance, was wondering whether the viewing public, which wasn’t so intimately aware of the whole situation, understood it the same way as my sister and I did. That consumed me more than the piece itself, to be honest with you.”

The motivation behind the dance lies in the myriad details of her father’s life, some perhaps still to be discovered. But the dance itself is more about symbolism, catharsis and the relentless staccato of life. “It was a little abstract from traditional flamenco. It told the story, but I think it told a different story to different people,” her brother says. Ms. Romero is working on taking the production on tour and will promote it this fall at the Contact East performing arts conference in St. John’s this fall.

Maybe what it most shares with Mr. Romero’s life is an end to all the searching. When an acquaintance helped him find his early home, he placed his hands on the ruins and said, “Aqui me muero.” Here I die. In other words, he had come full circle, he was now at peace, his search was over.

Ms. Romero makes it clear that some of that peace is also in Jacinto, the search to know her father made manifest through dance and perhaps given a place to rest.

Editor’s note: In the comments, please share any other works of art you have come across that channel grief into something beautiful, moving or thoughtful.