Nearly 30 years after earning a Bachelor of Fine Arts in Photography and Film Studies at Montreal’s Concordia University, on Nov. 18 the Pulitzer Prize-winning photojournalist Barbara Davidson is to receive an honorary doctorate from her hometown alma mater. From her start working on the student newspaper, The Link, and after a stint at the Kitchener-Waterloo Record (now the Waterloo Region Record), she covered the war in Bosnia, where she was held captive by a volunteer Serbian unit for two days.

Although Davidson swore she’d never enter a war zone again, she later covered conflicts in Iraq, Afghanistan and the Democratic Republic of Congo. For the Dallas Morning News, she worked Hurricane Katrina; for The New York Times, Hurricane Harvey. On staff at the Los Angeles Times until 2017, Davidson photographed victims of the city’s gang violence. Under extreme conditions, Davidson has spent a career documenting the compassionate side of some of the worst things the world has to offer. She spoke to The Globe and Mail from her home in Los Angeles.

You earned a degree in photography, but could any course of study have possibly prepared you for the career you’ve had?

It’s twofold. One, I learned about the qualities of what journalism was all about at the student newspaper. And when I was studying in the Fine Arts program I really learned how to see freely. By that I mean didn’t go to a cookie-cutter photojournalism school that teaches you the rules you shouldn’t break. Was I trained to be able to do what I now do? I think it happens and evolves over time. Each situation that I found myself in would shape and inform the next situation.

But could anything have readied you for covering the Bosnian War and your detainment there?

It was something I wasn’t 100 per cent prepared for. It was at the end of the war, and I had taken a leave of absence from the Kitchener-Waterloo Record. I had read so many horror stories about what was happening to the civilians trapped in the conflict there and I felt I had to cover it. I worked alongside the International Committee of the Red Cross and I also covered stories with other journalists. I was making my way out of Bosnia and heading home when my driver accidentally drove into Serbian territory. I was detained for two days by a Serbian paramilitary unit, Arkan’s Tigers. It was a terrifying experience because I didn’t know whether I was going to be killed or not the entire time. But my survival instinct is pretty strong. I know how to navigate in tricky situations. A lot of it has to do with your personality.

I was terrified of what was playing out in front of me. But I certainly never let my captors see that. I would show them that this was a mistake, that I knew I was going to get let go soon. I would never let them dehumanize me. On the other hand, I could hear them torture my driver, a young Croatian, in the next room. It was a very tricky situation that thankfully ended up okay.

How did it affect you?

The experience in Bosnia had a profound effect on me. Something like that shapes you. It scars you. It informs every work that you do going forward.

After that, I imagine going back to the Kitchener-Waterloo Record probably wasn’t in the cards.

I had post-traumatic stress disorder and nobody really knew what that was in my profession. As journalists, nobody talked about it. But, yes, going back to a small-town newspaper that I loved was no longer an option. About six months after being held captive I ended up moving to Washington, D.C., where I got a job at the Washington Times. It afforded me the opportunity to get my papers in order to work in a much bigger market, and to work alongside my heroes and cover much larger news.

This was around the time of Clinton’s impeachment, yes?

That’s right. So, the whole landscape of what I had been covering previously changed dramatically. I had left Canada. I didn’t know a single soul in the United States. I had no family there. I left everything behind because I had this drive in me that was influenced by what happened to me in Bosnia. On a subconscious level, I thought if I could survive that I really could do anything. I felt I could grab my dreams hard, and that’s what I did.

You’re being awarded an honorary doctorate for, and I quote, your “impact capturing the human condition in photographs.” Is that what it says on your business card?

[Laughs] Yes, I would say that sums up quite sincerely my mission statement as a photojournalist. I’m not interested in statistics. I want to know about the people being impacted by the violence or the poverty or being marginalized. My role is to highlight their stories from the most human perspective I can. If the reader has no empathy for the people I’m documenting, then I feel I’ve failed as a journalist.

On screen, photographers who work in war zones are often portrayed as adrenaline junkies. Is there truth to that?

I think with intensity of conflict zones and the intensity of being in a natural disaster, the stories are so profound in those spaces because of what is being played out. These are often life and death situations. That’s when people are often at their most honest and their most raw, and that’s when they need to have their stories told. You don’t want human suffering to go unnoticed. That would be horrible.

Is there an excitement or a rush, covering these kind of life and death events?

I think what you’re saying is correct. But I did a story on gang violence in Los Angeles. I spent two and a half years working on that for the Los Angeles Times, and that was literally in my backyard. The intensity I experienced was just as intense as I experienced overseas. I didn’t feel I was in danger of losing my life, really, but the intensity of the emotional impact of loss, violence and heartbreak was very similar to what I had seen overseas. So, I seem to find powerful stories both abroad and in a domestic space. These are the stories I gravitate to. These are the stories I want to tell. Those intimate, under-reported stories are the ones that really fuel the desire to do what I do.

I will tell you this: I have experienced incredible levels of kindness when I am in the worst scenarios possible. Covering 9/11, there was funeral after funeral after funeral. I was talking to someone, asking their name at yet another funeral. I started to cry. I was so embarrassed because I wasn’t able to keep myself composed. But I remember the kindness they showed me, telling me I wasn’t a robot, that I was human.

How hard is it to keep your composure?

That was a rare moment. Because if I break down, I’m not doing justice for the people I’m covering. But I have experienced ugliness covering political rallies like I’ve never seen. Yet when I’m in the heat of a disaster or destruction, the kindness people show one another is unmatched. When you’re in a situation of life and death, there’s no time for trivialities. I mean, this is it. And when you’re in a situation of that kind, people do come together. 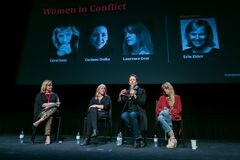 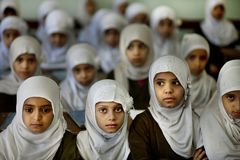