In August, 2015, Tima Kurdi and her brother, Abdullah, were constantly in touch. He and his family, including two young boys, had fled war-torn Syria and were planning to cross the Aegean Sea into Greece from Turkey with the aid of smugglers. But the voyage was not going to plan.

On Aug. 21, Abdullah texted to say the waves had been too high to launch. Four days later, he said the boat had been overcrowded. Two days after that he said a rubber dinghy looked unsafe.

On Aug. 31, Ms. Kurdi woke inside her suburban Vancouver home expecting to read that her brother had decided against the crossing, but there were no new messages.

She would learn his phone was at the bottom of the sea – the family had attempted the voyage, but the boat had capsized. Ms. Kurdi’s darling nephews, two-year-old Alan and four-year-old Ghalib, and their mother, Rehanna, were dead; Abdullah survived and was rescued by a coast guard ship.

A photo of Alan’s lifeless body on that Turkish beach would spread around the globe, the image evoking tears and heartbreak wherever it was seen, and spurring calls for action on the Syrian refugee crisis.

In her powerful new book, The Boy on the Beach, Ms. Kurdi shares the story of not only the tragic voyage but of the years-long hardship endured by her entire family – and other Syrians – as their homeland descended into civil war. She tells of horrific killings, suicide bombings and torture, and also sheds light on the daily indignities and hopelessness of refugee life. She does this while also expressing hope for the future, for a time when she can again walk down the jasmine-scented streets of Damascus.

The book traces Ms. Kurdi’s rise from a self-described nobody – a hairdresser who used to tune out the news – to an advocate who has helped launch a foundation in her nephews’ names and given approximately 100 speeches, including to the United Nations Refugee Agency.

She grapples with her guilt for providing the money paid to the smugglers, saying in an interview she will carry that regret to her grave.

Ms. Kurdi’s other brother, Mohammad, arrived in British Columbia with his family in December, 2015, after their refugee application was finally approved by the Canadian government, and the book documents the frustrations of the sponsorship process. Ms. Kurdi recalls a reporter asking if she had gotten her happy ending once Mohammad’s family arrived. She replied that her fight was not over.

The Boy on the Beach makes clear how that fight continues. Ms. Kurdi vows to support refugees around the world and implores readers to open their hearts and doors. Her own family’s tale remains unfinished. She describes her relatives as “seeds in the wind, scattered across the map,” and struggling to survive in unfamiliar lands.

In an interview inside her home, with a large picture of her beaming nephews nearby, Ms. Kurdi said that despite the painful events, the book’s message is meant to be one of love.

“My family is not different than yours. We are one. Maybe we speak a different language, maybe we have a different religion, but people are people,” she said.

Ms. Kurdi writes there isn’t a day that goes by when she wishes she hadn’t paid the smugglers. She said she would never forgive herself.

“Every single moment, everywhere I turn in this house, the minute I wake up. It’s always, ’Why, why did I do it?’”

The book opens at the family home in Damascus where, Ms. Kurdi writes, she had a typical middle-class upbringing. She recalls a steady stream of neighbourhood guests and says the house was always filled with people, music and laughter.

Ms. Kurdi would eventually marry a man from Canada who had travelled to Syria to find a wife. She moved to B.C. in 1992, but regularly returned to visit Damascus, and fondly remembers her first trip back with her son.

Her 2011 visit was different. Ms. Kurdi recalls protests against the Syrian government and says a Canadian official called her and said the consulate was advising people to leave. Ms. Kurdi says she then believed everything would be fine.

The book details the brutality her family suffered in the ensuing years. One of Mohammad’s sons would see a friend die after being shot and would later be struck by shrapnel in a suicide-bomb attack. Ms. Kurdi says rebels at one point ordered the same child to shoot his father, only relenting when Mohammad recited a line from the Koran.

Ms. Kurdi writes that Abdullah was once kidnapped by a group of men and taken to a home where he and others were tied up. She says her brother was beaten and had his teeth pulled out with pliers. The captors ultimately concluded they had the wrong man and threw him out.

And Ms. Kurdi says 15 of her relatives were killed by Islamic State fighters in attacks in June, 2015, including a cousin and her two sons. All three were beheaded.

In 2014, Ms. Kurdi visited her brothers in Turkey, where they’d fled to escape the carnage and gained a deeper understanding of their plight. They worked difficult jobs for very little pay and saw no future for themselves or their children.

“I had come to better understand the difficulties my siblings had endured for years – the feeling of being stuck between a rock and a hard place. The feeling that the war would never end. That they would never be able to return home. That the world was ignoring them,” she writes.

It was during that trip, Ms. Kurdi says, that she realized being a refugee can feel like “you are a ghost among the living.”

She wondered how her family could ever have ended up in such a situation.

“Picture your own city suddenly turning into a deadly war zone. Imagine being afraid to send your children to school. To go to work and back. To do even the most basic errands. Imagine what it would be like if your friendly neighbourhood suddenly turned hostile,” she writes.

After the deaths of the boys and their mother, Ms. Kurdi writes, she was regularly invited to meet with politicians to tell her story. Many, she said, offered to do more for refugees, telling her her family’s tragedy would be the last.

But after the events had been held and the pictures taken, Ms. Kurdi writes, most did not respond to her follow-up inquiries.

When asked if she had ever felt used, Ms. Kurdi replied: “Absolutely.” She described that development as immensely sad.

She said the Kurdi Foundation, which she and Abdullah established, aims to provide refugee children with meals, clothing and medicine. She said it has been difficult getting the foundation off the ground. It held one event last year, which raised approximately $1,000 for children in Erbil, in the Kurdistan region. Ms. Kurdi donated an additional $500.

“I’m hoping really that we get it started and we have people to volunteer and help us. Because this is really, what I want to do, me and my brother,” she said of the foundation.

Ms. Kurdi describes the boys as “angels watching over us.” She remembers Alan as a happy child who would elicit smiles from complete strangers. She tells of Ghalib’s fondness for sweets and recalls the boy asking if there would be cookies in Europe. (Alan and Ghalib have been widely reported as three and five years old respectively, but Ms. Kurdi says they were actually two and four, with Alan born in June, 2013 and Ghalib in July, 2011.)

The war has sent the Kurdis in different directions. Mohammad lives near Ms. Kurdi’s home in Coquitlam, B.C., while Abdullah continues to struggle with the tragedy and lives in Erbil, Iraq. One of Ms. Kurdi’s sisters is in Germany, while the other two are in Turkey. Her father remains in Damascus and Ms. Kurdi hopes to visit him again.

Ms. Kurdi said many Syrian families have endured the same experiences, and carry scars in their hearts.

She said all she wants for Syria is peace, and eschewed any discussion of politics.

Opinion
The crossing: Tima Kurdi on her family’s voyage through tragedy and hope
April 18, 2018 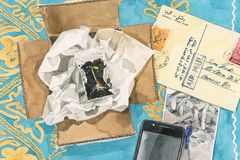