No new TV for you. That’s the doomsday scenario if the 24,700 members of the Writers Guild of America (WGA) don’t come to some agreement with their agents by midnight Friday.

It’s a terrible prospect: U.S. screenwriters leaving their agents en masse, and perhaps turning off their laptops, plunging any production not already written into silence. (Eventually this would affect films, too, but the more immediate danger is to television, because television shoots on a much tighter schedule.) No one wants this to happen. But I have to admit, I find the standoff … thrilling.

I’m a member of the Writers Guild of Canada – whose 2,200 English-language screenwriters are volubly supporting the U.S. screenwriters, as are the 50,000 writers in the International Affiliation of Writers Guilds – so I have a vested interest. But mainly, I’m sick of writers getting the worst of every deal.

Because everything starts with a writer and nothing happens without one, I’ve been waiting my entire adult life for writers to push their agents’ Italian loafers off their necks and demand some respect. Now, maybe, some version of that scenario is happening.

The conflict between the WGA and the Association of Talent Agents (ATA) comes down to one word: packaging. An agent takes a writer’s script, and then attaches more of their clients – a director, some actors – to it. They sell that “package” to a production company or studio, and then – and this is the most important part – take a percentage off the back end for putting the series or movie together. To get more money at the end, agents need to encourage less spending at the beginning. So, they ask for less money for their writers, in order to take home more money for themselves.

The writer creates the content; the agent does not. But the agent gets rich off the spoils – while claiming to be acting in the writer’s best interest. Although it’s been going on for decades, it really exploded with the corporatization of Hollywood in the 1990s. So, writers have to park their beat-up Toyotas in overflow lots far from Los Angeles restaurants, while their agents blithely toss their Bentley keys to the valets. Writers are the butt of all jokes (“The starlet was so dumb, she slept with the writer to get ahead”), and in movies, they’re all miserable (Barton Fink) and/or murdered (The Player).

Packaging isn’t as big a problem in Canada. There are fewer productions; our series and films generally cost less ($3-million for a Canadian TV hour, versus $4-million to $5-million for a U.S. one, and much more if there are name stars); and there’s no studio system. But many Canadian agents will admit privately that they’ve participated in cross-border packages. And about 500 WGC members are also in the WGA, so they’re impacted directly.

“We are watching the situation, and we’re certainly supporting our colleagues,” Maureen Parker, the executive director of the Writers Guild of Canada, said in a phone interview on Tuesday. “Packaging has gotten out of control. How can writers negotiate fairly when their own agents undercut them?”

The WGA is asking the ATA to commit to an “agency code of conduct” that eliminates packaging, along with agents acting as producers via affiliate entities. As of Tuesday, the two sides were talking. But it’s going to be tough to get agents to sign, because, well, they like living in hillside mansions with infinity pools.

More than 95 per cent of writers voted to pursue the code of conduct, however – so why is this happening now? Were the writers emboldened by movements such as #MeToo and #TimesUp, which demonstrate that individuals are powerless, but collectives can move the needle? Were they fed up with sitting alone at their desks for years on end, sweating over ideas, only to watch the profits flow to the 1 per cent, while they struggled to pay their bills? Or, in this Golden Age of TV, is there finally such a demonstrable need for what writers do – more than 400 scripted TV series in the United States in the last year; insatiable streaming services such as Netflix, Hulu and Apple, with Disney and Warner Bros. on the way – that they finally can be confident enough to take a huge risk?

Because what they’re doing is risky. “We know it’s the right fight,” Parker said. “The system has to change. But it’s going to be messy.”

As everyone there will say to you ad nauseam, Hollywood is a business of relationships. The writer/agent relationship is often highly personal, formative and lasting. They believed in you when no one else did. You go to their weddings. If agents don’t sign that code of conduct, writers will have to choose: their fellow guild members versus their professional friends. Their morals versus their careers. “It’s the writers who will be caught in the middle,” Parker said.

One thing is for sure: When writers are embattled, the rhetoric is great. After the first deadline, April 6, came and went, the WGA-Agency Agreement Negotiating Committee sent WGA members an e-mail explaining why they were extending the deadline to Friday.

“All of this might have happened last week,” the e-mail read. “Instead, real negotiations begin now, as they always do, with a ticking clock. It is your power – membership power – and your willingness to use it – that has brought us this far. Conflicted practices and misaligned financial incentives have plagued our relationships with our representatives for too long. We sincerely hope that the agencies will now become our true partners in a joint effort to deal meaningfully with both.” The e-mail was signed, “In Solidarity.”

Man, I hope the writers win. Because they make our lives immeasurably more interesting. Because they deserve to be paid for that.

Because they put up with a lot of this: Agent A: “The writer delivered a perfect script, perfect.” Agent B: “When does it go into production?” Agent A: “As soon as I get the rewrite.”

Because they’ve been the punchline long enough.

For television screenwriters, is Time really Up?
June 28, 2018 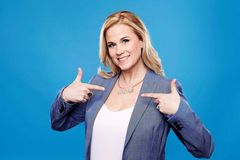 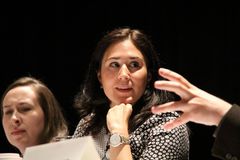