The South Korean, genre-bending, income-inequality drama Parasite swept the top categories at the Academy Awards on Sunday night, winning Best Picture, Director, Original Screenplay and International Feature. Directed and co-written by Bong Joon-ho (Okja, Snowpiercer), it racked up a number of firsts: the first film not in English to win Best Picture, the first Asian film to win a screenplay Oscar, the first film to win the newly named Best International Feature category (formerly Best Foreign Language Film) and the first to sweep picture, director and screenplay since American Beauty (1999).

Hollywood’s admiration for Parasite was the one through-line in a wildly uneven three-and-a-half-hour ceremony. Each of Parasite’s four wins earned a standing ovation, and when executive producer Miky Lee was cut off before she had a chance to speak, the crowd, led by Charlize Theron and Tom Hanks in the front row, waved and chanted until she came back on.

Bong’s acceptance speech for Best Director was especially touching, because it felt like a genuine cultural exchange. He mentioned a quote – “The most personal is the most creative” – that was “carved into my heart … and it was Martin Scorsese who said it,” he said, gesturing to fellow nominee Scorsese (The Irishman) in the audience. Bong also thanked nominee Quentin Tarantino (Once Upon a Time…in Hollywood) for championing his work, and complimented the other two nominees in his category, Sam Mendes (1917) and Todd Phillips (Joker).

When Spike Lee, who won his first Oscar last year for writing BlacKkKlansman, handed the best director statuette to Bong, it felt for a moment like the Academy of Motion Picture Arts and Sciences’ four-year initiative to diversify was working (it has added 3,000 new members, many of them women and people of colour). But the hashtags #OscarSoWhite and #OscarSoMale still apply; much more work needs to be done. Lauding Parasite is nice – but where are the nominations for its actors? And will Hollywood hire them to be in anything else?

That tug of war between Hollywood’s woke intentions and its retro behaviour continued throughout the evening. Janelle Monae and Billy Porter opened the show with a song-and-dance extravaganza accompanied by diverse dancers dressed in costumes from films that weren’t nominated: Queen and Slim, Us, Dolemite Is My Name. It set a pattern that became a little uncomfortable to watch: people of colour as presenters (Anthony Ramos, Lin-Manuel Miranda, Kelly Marie Tran, Mindy Kaling), yet mostly white winners.

A host might have been able to bridge that disconnect, but for the second year in a row, the ceremony didn’t have one. That leaderlessness began to feel like a sign of our rudderless times, as performers and presenters came and went without being properly introduced, and a random music montage ended, inexplicably, with Eminem singing a song from 2002.

Former hosts Chris Rock and Steve Martin popped up at the beginning to trade a few jokes: “Mahershala Ali has two Oscars,” Rock said. “Know what that means when the cops pull him over? Nothing.” They joshed about Jeff Bezos’s riches, and remarked that something was missing from the nominees this year: “vaginas.” But they avoided the riskiest topics – politics and the Harvey Weinstein trial – and disappeared without making a mark.

About that vagina thing – the evening featured frequent women’s-empowerment speeches and setups, such as the one where presenters Brie Larson and Gal Gadot thanked Sigourney Weaver, star of the Alien franchise, for paving the way for them to play superheroes. The implication was that more women should be nominated in more categories, and at every such mention, the crowd cheered. But they’re the people who did the voting. They were protesting themselves.

The statuettes were spread across several films, adding to the night’s shapelessness. There were no surprises in the acting categories; all four winners have been scooping up awards for months. Brad Pitt, Best Supporting Actor for Once Upon a Time…In Hollywood, remarked that the 45 seconds he had to make a speech were “45 seconds more than the Senate gave John Bolton” in Donald Trump’s impeachment proceedings; he also choked up while thanking his parents for taking him to see Butch Cassidy and the Sundance Kid at the drive-in.

Laura Dern, Best Supporting Actress for Marriage Story, thanked her “heroes,” her actor parents Diane Ladd and Bruce Dern. Joaquin Phoenix, Best Actor for Joker, delivered a speech that covered injustices and animal rights, acknowledged his “scoundrel” past, advocated for second chances rather than cancel culture, and quoted his late brother River: “Run to the rescue with love, and peace will follow.” And Renee Zellweger, Best Actress for Judy, made a case that heroes like Judy Garland “unite us… and inspire us to find the best in ourselves.” But no one took a risk or caught lightning in a bottle.

Though the World War One drama 1917 was the second-biggest winner of the night, with three – Sound Mixing, Cinematography, and Visual Effects – that likely felt like a disappointment, since the film had been a front-runner. Netflix must be bummed, too; after spending a reported US$100-million on its Oscar campaigns and earning 24 nominations, it took home only two wins: Dern’s and Best Documentary Feature for American Factory. The Irishman, with 10 nominations, was completely shut out. As were all of the Canadian nominees: Dean DeBlois (writer/director of the animated feature nominee How to Train Your Dragon: The Hidden World), Dennis Gassner (production designer, 1917), Sami Khan (co-director of the documentary short St. Louis Superman), David Giammarco and Paul Massey (sound mixing for Ford v. Ferrari), and Meryam Joobeur and Delphine Girard (both contenders for Live Action Short, for Brotherhood and A Sister, respectively).

On the bright side, presenter Natalie Portman got a lot of red-carpet love for her cape, embroidered with the names of underappreciated female directors, Billie Eilish sang a shivery version of Yesterday to accompany the In Memoriam segment, Zack Gottsagen (Peanut Butter Falcon) made history as the first presenter with Down syndrome, presenters Maya Rudolph and Kristen Wiig cracked up Scorsese with their bit about Acting and last year’s winner, Olivia Colman, presenting Best Actor, proved once again that she can do no wrong.

“Last year was the best night of my husband’s life,” Colman said. “He actually says that. And I’ve given birth three times.” Ladies and gentleman, your 2021 emcee. Please. 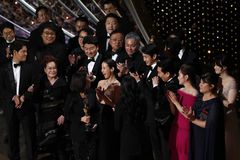 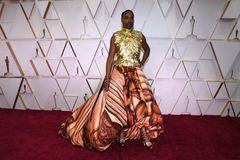