Last month, art almost killed a man. I mean it actually injured him – not in the sense of creating an “unsafe” emotional environment or in the sense of “erasing his identity.” I mean the guy went to hospital. The artwork was physically dangerous, and designed to be so, and no one is quite sure how to complain about it. In fact, as far as I know, no one has complained at all.

The art in question was Anish Kapoor’s creepy installation Descent into Limbo (1992), now at the Serralves art museum in Porto, Portugal. It is inside a concrete cube that he had built in the gardens of the museum. On the room’s floor is a black hole. It is only eight feet deep, but its interior is painted in a patented high-tech ultrablack paint that absorbs all light, and so it looks bottomless. There is a guard in the room, and there are warning signs, but that didn’t stop a 60-year-old Italian man from falling into it on Aug. 13. The man survived but was treated in hospital. There is no word yet on lawsuits.

I do feel sorry for the unnamed patron, but I also can’t help seeing in this unfortunate accident the greatest success of the piece. Here is art that without being overtly political succeeds in being truly dangerous.

The piece’s unabashedly menacing title is taken from Christ’s Descent Into Limbo, a painting of the late 1400s by Andrea Mantegna. The original represents a little-discussed event in Christian theology, when Christ visited hell in the days between his crucifixion and his resurrection, to release the souls who had been damned there. It shows Christ from behind, surrounded by lost souls, about to descend into a dark cave. The title of Kapoor’s piece nods then at both damnation and salvation.

Kapoor has always been fascinated by voids and darkness, particularly in architecture, and has built other pavilions with holes in them. One other piece on display at Serralves is a giant red funnel that looks as if it can suck you into it. It is inescapably sexual. But the new technology that makes the Descent so uncanny is actually proprietary to Kapoor. It is a black pigment that hit headlines in 2016 as the blackest black ever developed. It was invented by Surrey NanoSystems, a British firm, and it was intended for military use such as stealth planes and satellites. It absorbs 99.6 per cent of light and so makes it impossible for the human eye to detect the outlines of the shapes it covers. A piece of crinkled tinfoil painted with Vantablack will appear flat.

Kapoor created this piece in 1992 for exhibition at Documenta, but Vantablack wasn’t around yet. He has been using the paint as it was being developed, as early as 2014, and had always expressed at its marvellous capacity for disorientation. He told the BBC in 2016, “'Imagine a space that’s so dark that as you walk in you lose all sense of who you are and what you are, and also all sense of time.” So he paid the manufacturer an undisclosed amount for the rights to exclusive use of this paint. Other artists were outraged at this selfishness – how can one own a colour? One critic tweeted that it was Kapoor’s narcissism that was at 99.6 per cent.

This paint is so unusual that it actually creates an optical illusion when coating the inside of the pit – it looks from some angles like a two-dimensional circle of black on the ground, not like a hole at all. This is perhaps what fooled the viewer/victim. It is stealth art.

I, too, am uneasy about Kapoor’s monopoly on the pigment, which he is able to hold only because of his personal wealth. It seems won in a brutally one-sided capitalist competition, and one can see why this pains the communitarian art world.

But the fact that this powerful artwork relies on the fruits of the military-industrial complex actually excites me. The fact that such advanced and terrifying technology can be used creatively and abstractly is almost subversive, and representative of what art at the highest level is always doing. The first use of oil paint to create the illusion of three-dimensional reality was just such a use of the newest science in the service of trompe l’oeil.

You could look at Descent into Limbo as a comment on the terror created by military stealth: This is art as weapon, man-eating art, a descent into the underworld of war. I’m terribly sorry that it had to be the poor viewer’s injury that brought it to an astounded world’s attention, but he did us all a favour. 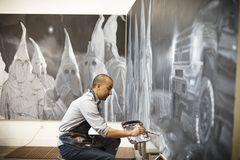 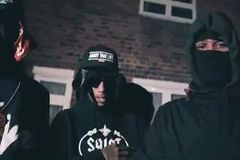 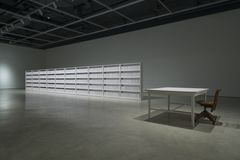