In celebration of Canadian culture and Canada Day, The Globe and Mail and nine leading arts organizations have produced a video that will honour this country’s dance companies and the Leonard Cohen song Anthem.

The Toronto Symphony Orchestra developed and performs an original arrangement of the song, sung by members of the Canadian Opera Company.

The popularity of Anthem, which first appeared on Mr. Cohen’s 1992 album, The Future, has enjoyed a resurgence during the pandemic, possibly owing to the bittersweet hope of its lyrics that have appeared across social media during the course of the crisis: “There is a crack in everything/that’s how the light gets in.”

Sandra Laronde, artistic director of Toronto-based Red Sky, was intrigued by Mr. Cohen’s iconic expression of creativity. “That crack of light, where does it come from?” Ms. Laronde asked herself. “Perhaps it’s a spark of kindness that creates the light.”

The Globe undertook the project to showcase the importance of our cultural institutions at a time when they have suffered considerably because of the pandemic closings. Though Anthem isn’t necessarily optimistic, it speaks to the idea of resurrection and return.

“This is the present moment, and we’re going to work through this,” said Jolene Bailie, artistic director of Winnipeg’s Contemporary Dancers. “We’re still dancers. We’re going to find a way.”

Vanesa Garcia-Ribala Montoya filmed her dance at the entrance to a small church in Montreal. She speaks about a curious onlooker and the inspiration of Mr. Cohen’s Anthem. “As I was setting up my camera, a priest came out. He was intrigued by what I was doing, and we spoke afterward. I was inspired by Anthem because of its positive outlook. These are tough times for the arts. The situation is fragile for everyone. It’s difficult to remain hopeful, but the song inspires that. Entertainment and artistic impression are important. This project is the kind of thing we need to remind audiences that we’re still here. That we’re not disappearing.”

Calgary dancer Kevin Jesuino collaborated with Kainai Nation choreographer Troy Emery Twigg for the Banff Centre piece that drew on the idea that the land holds stories, and that by waking up the land the stories are translated to our bodies.

“For this project, I was buried in soil. It was a little bit uncomfortable. But there was another moment of really embracing the fact that I was becoming the Earth. I was also thinking about how many bugs were chomping my skin. This project wasn’t just human-to-human. It was me in relationship with nature. That relationship and the relationship with those I collaborated with were actually the art piece. The byproduct of that is what the audience will see.”

The five solo dancers of Ballet BC each set their own improvised pieces in the Vancouver area. Kirsten Wicklund danced hers on Granville Island.

“We were exploring improvisation, trying to showcase a spot we felt was uniquely beautiful to British Columbia. To inform my movement, I used the sensations of the outdoors, including the air, the temperature, the movement of the wind and water. I also responded to the sounds I was hearing around me. The sound of the nearby market and Leonard Cohen’s Anthem, which I had playing. Turns out he’s a pretty good dance partner.”

Carol-Ann Bohrn, who performed in the city’s historical Exchange District, found performing outdoors to be liberating.

“Dancing outside is not something most dancers aspire to. You can become very self-conscious. During the filming, people were out and about. The mayor of Winnipeg walked by while we were rehearsing. But the pandemic clarified something for me, that there was nothing so natural and beautiful than dancing outside. I mean, why wouldn’t you dance outside after what we’ve just been through? The whole concept of normalcy has gone right out the window. Any person who dances for a living is doing it because they love it. So, for me to have a feeling of self-liberation doing my favourite thing in front of people in public, that’s what everyone hopes for.”

Though the performance by Miyeko Ferguson took place on the Toronto shoreline, the piece was incubated on Lake Temagami, in Northeastern Ontario. Ms. Laronde, artistic director, speaks about the company’s process.

“The land informs the piece. All of our work at Red Sky is like that to some extent. It’s great to bring artists to Northern Ontario, for example, and expose them to the beauty of a lake and old-growth forest and the loons at night. It’s inspiring, especially for the imagination and the world the dancers will inhabit later on stage. In working on this piece, I was thinking of water and sky. I wanted there to be a story, as opposed to generic movement. It had to come out of the land and have meaning.”

In order to set its piece on the ocean floor at Hopewell Rocks Park in New Brunswick, the Moncton-based company waited until the tide went out to film at 6 o’clock in the morning. Dancer Thomas Badrock talks about getting elevated.

“It was a challenge physically. It’s sandy. It’s slippery. You had to be careful. And we didn’t practise or rehearse in the outdoor space until the day of the video shoot. In the end, though, it was nice to get out with the company and to perform again. What we’re looking at in the photo is a reflection of the enjoyment people can have outside. The shot shows the environment. We’re seeing energy and happiness.”

The solo piece performed by Alexander Skinner reflects the social and physical remoteness of the current times.

“I worked with choreographer Alysa Pires over Zoom. We spoke a lot about this period of isolation and all the shared experiences that most Canadians are having right now. We noticed how much unity and togetherness have become apparent, and how ironic it is that although we are physically separated there’s an interconnectedness that’s still being felt. We began the piece with small arm-weaving and hand-weaving. As the movements get bigger and the song gets bigger, so does the hope. Anthem does have that hope. We felt it was important for the piece to reflect that.”

No dance floor, but dancing by yourself is fine as B.C. lifts restrictions on bars and clubs
June 13, 2020 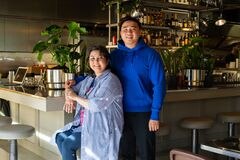 Opinion
The show needs to go on: Canada should be planning for the return of the performing arts
Subscriber content
June 23, 2020 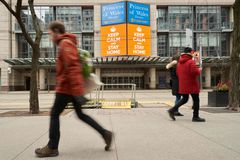 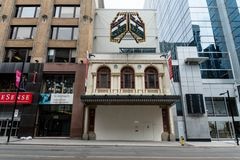