And the Birds Rained Down, the new film written and directed by Louise Archambault, based on the novel by Jocelyne Saucier, is a lovely thing. It dramatizes how a connection can be made anywhere, at any time, if we stay open to it. The lives of its 70-plus-year-old characters – three brothers who grow marijuana deep in the Quebec forest, and a woman who spent her life in an institution – are the opposite of busy, glamourous, wired-up. But their still waters run deep.

“The theme is so strong and simple at the same time,” Archambault, a pre-eminent talent based in Quebec, said in an interview, speaking English with a French lilt. (We met last September, when her film premiered at the Toronto International Film Festival. It’s now open in select cities across Canada.) “You reach a hand to others, no matter what your differences, and there’s hope.”

Review: Quebec drama And the Birds Rained Down is beautiful and uncomfortable at the same time

Central to that is the unexpected love that blooms between one brother, Charlie (Gilbert Sicotte), and that institutionalized woman, Marie-Desneige (the great Andrée Lachapelle, who died this past November). And central to that is their sex scene. Archambault wanted it to be both frank and beautiful, celebrating the sensuality of older people, rather than denying it. She’d pulled off a delicate sex scene between two lovers with special needs in her 2013 film, Gabrielle, which won Best Picture at the Canadian Screen Awards. In fact, Saucier sold her novel to Archambault – after declining offers from several others – precisely because of that Gabrielle scene. “Jocelyne said, ‘I know how you see humans and intimacy, how you will show it on screen,’” Archambault recalls.

Before becoming a director, Archambault took life drawing and painting at Concordia University. “You see a lot of bodies,” she says. “A young man, a 60-year-old woman, a person who’s a bit overweight. Usually we look away. But if you look long enough, you just see the beauty of everyone. Humans, wow, it’s so magical what we are.”

So when the day came to shoot the sex scene, in a chilly cabin the production built in the middle of a boreal forest between Quebec City and Chicoutimi, Archambault did everything a responsible director should: She thoroughly discussed the options with her actors, she closed the set, she allowed for rehearsal time to ease shyness and nerves. And then she did what she does with every tricky scene: She talked the actors through it as the camera ran.

“I’ll say, ‘Put your left hand on her neck, slow, slow. Andrée, go to his chest. Okay, kiss,’” Archambault says. “This way they listen, but they stay in this moment. They don’t have to worry, is it okay if I kiss her breast? The actors don’t want to be in their own egos, they want to be the characters. They want to share. Their clothes, who they are, they leave that outside. They abandon themselves to the moment.”

The result is a tender, gorgeous sequence that makes us recalibrate what sex looks like – how on screen it’s too often reduced to one kind of beauty, one acceptable age. “They have scars, wrinkles,” Archambault says. “But there is beauty in that. In their eyes, you see their desire. They want to touch one another. I wanted to give the audience that.”

For months after Archambault first read Saucier’s novel, it stayed with her – she could see the images, smell the forest. In her screenplay, she kept its basic arc, and updated a subplot about wildfires. “I wanted the fact of these fires, which now burn everywhere, to always be there, over the characters’ heads,” she says.

She built the brothers’ cabins on a lake in a virgin forest, and worked only with generators – no electricity or running water – ferrying the actors to set via ATVs, dodging moose and moose scat. “Porcupines ate our sets each night,” Archambault says, laughing. “The elements humbled us. Which I welcomed.”

Our current moment is a cynical one, “dark and negative and stressful,” Archambault says. “Everyone is very individualistic and judgmental. This film, these characters, are not into that. They’re just into, this is day-to-day life and what can we do with it? They want to experience life as who they are; to open up to whatever happens and whoever you meet. It’s not perfect. But when you get to know someone, you realize that person can give you so much.”

Confined to an institution, Marie-Desneige had been kept from herself – made to believe she didn’t have a self at all. (The character was inspired by Saucier’s aunt; Saucier and Archambault talked a lot about her.) Thousands of Maries like her “were put away and that’s it,” Archambault says. “I want them to exist. They have the right. I have much difficulty with that idea, someone deciding another’s life.”

So it’s interesting that the beginning of Marie-Desneige’s new chapter briefly intersects with the final one of Tom (Rémy Girard), Charlie’s brother: Suffering from a fatal illness, he chooses to take his own life. It’s poignant that Lachapelle, faced with terminal cancer, herself chose medical assistance in her death last November.

“In Quebec, we talk a lot about dying with dignity,” Archambault says. “If I hadn’t included Tom’s part of the story, I would have been like we are all the time, in denial. We are in denial of death.

“But what do we want in life?” she continues. “To love, to be loved, and dignity. To have the potential to interact. To look into the eyes of another.” Right now, her own eyes are shining with conviction. “Happiness is not every day. Happiness is not something that boom, arrives. It’s moments. It’s just moments in your life, and you have to grab them.”

At one point during editing, Archambault tried out a shorter version of the sex scene. “But then it looked like an American film,” she says, laughing again. “’Just get it over with. They have sex, that’s all.’ But that is not this film.” 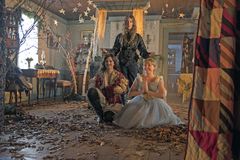 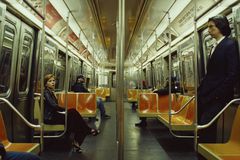 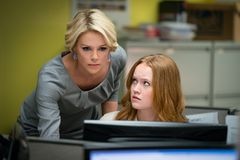