Creating a work of art around a recent horrific event comes with a complicated set of implicit rules and potential minefields. Do not exploit the victims for your art, do not tie up loose ends in any sort of neat-and-orderly way, do not cross the line into maudlin sentimentality. Make the viewer feel uncomfortable, but for the right reasons.

When done right, art helps us remember – and maybe even understand things we weren’t quite able to grasp before.

Over two decades since the event, the Sept. 11 attacks have inspired artworks ranging from comics and rock and roll songs to theatre, novels and films. With the 20th anniversary on Saturday, art offers new ways to reflect and remember.

Come From Away on Apple TV+

There’s a reason this most unlikely of artistic feats – a feel-good musical about 9/11 – has become perhaps the most celebrated work of art to emerge from the Sept. 11 attacks. Come From Away, with book, music and lyrics by Irene Sankoff and David Hein, is as lovely and charming as the characters it portrays. This musical about how the people of Gander, N.L., stepped up to welcome thousands of stranded passengers from all over the world during that horrible week, is now streaming globally on Apple TV+ (beginning Sept 10). Delightful and sensitive – but never sentimental – Come From Away has been the toast of Broadway, where it returns for live performances on Sept. 21. Its emotional power translates beautifully to the small screen, with a filmed version of the Broadway show directed by Christopher Ashley and starring members of the original and current Broadway productions. Shot this year with a live audience that included 9/11 survivors and front line workers, it begins with the words “based on actual events and real people” and ends with photos of them, as the credits roll.

It’s part of a slate of Come From Away events and new releases pegged to the 20th anniversary. They include Covers From Away – an album of reimagined cover versions of the show’s musical numbers by Newfoundland and Labrador artists. You can welcome in the rock (and folk and show tunes) on Sept. 17, when it’s released.

If only live will do, performances of Come From Away are scheduled to return to the Royal Alexandra Theatre in Toronto in December.

Healing Hearts: A Tribute in Drawings by John Coburn at Beckett Fine Art

When the remnants of Hurricane Ida blew through the New York area last week, Toronto-based artist John Coburn was stuck in the aftermath, stranded trying to make his way back to where he was staying in Brooklyn from New Canaan, Conn. He took it in stride, governed by perspective. Coburn was there for an exhibition commemorating the 20th anniversary of the 9/11 attacks. The show included Coburn’s work – a project that has consumed the Canadian artist for 20 years.

The Hamilton-born, Toronto-based artist made his first oil painting while on a family trip to New York – the Statue of Liberty. He was 11. While studying art at Georgian College in Barrie, Ont., he went back regularly to New York to capture it. After the Sept. 11 attacks, Coburn felt a need to return. A few weeks later, he managed to slip into the off-limits construction zone. Ordered out of the area by a police officer, Coburn showed him a drawing he had made of the World Trade Center in 1998 – and the officer let him stay. His art became a sort of passport. Over the next few months, Coburn visited repeatedly and made more than 40 pen-and-ink drawings – of survivors, firefighters, the hellscape in Lower Manhattan. He created a book that he gifted to victims’ families. When Coburn’s Toronto studio burned down in 2006, almost everything was destroyed – but not those 9/11 drawings, which were singed around the edges. Coburn has since donated 27 of these works to the permanent collection of the National September 11 Memorial & Museum.

Now an exhibition in Hamilton is featuring nine of those originals – and a copy of that Twin Towers drawing that gained him access to the site in 2001. “I draw because of New York. I paint because of New York,” Coburn says. “New York answers all creative questions. You don’t have to invent anything. You just have to stop and open your eyes.”

Healing Hearts: A Tribute in Drawings by John Coburn is at Beckett Fine Art in Hamilton until Sept. 18. A commemoration will be held outside the gallery on Sept. 11 at 11 a.m.

Ordinary Heroes: A Memoir of 9/11 by Joseph Pfeifer

Much of the literature inspired by the attacks looks at the political and geopolitical aftermath, including the recently released Reign of Terror: How the 9/11 Era Destabilized America and Produced Trump by Spencer Ackerman. For a more intimate perspective, Joseph Pfeifer’s new memoir offers a deeply personal front-row seat to the horrors of that day and well beyond. Pfeifer was the battalion chief in charge of four firehouses in Lower Manhattan – a familiar face to anyone who has seen the 2002 documentary 9/11. Early in the film, Pfeifer is out looking into a possible gas leak when the first plane barrels into the North Tower. In his memoir, Pfeifer recalls the plane roaring so close that he could read the word “American” on the fuselage. Then he sees the crash. He was only a few blocks from the World Trade Center and his team headed straight for it. “I knew instantly I was going to be the first chief on the scene and would have to take command,” he writes. Minutes later at the site, he was surprised to encounter his firefighter brother, Kevin Pfeifer – who was supposed to be writing his captain’s exam that morning. “Without saying a word, he and I looked at each other, wondering if the other was going to be okay,” Pfeifer writes. Then he ordered Kevin and his company up to the 70th floor. Kevin would never return.

Shortly after 9/11, the U.S. Congress established the September 11th Victim Compensation Fund, appointing lawyer Kenneth Feinberg to lead the effort. The Netflix film Worth, by director Sara Colangelo (The Kindergarten Teacher) recounts Feinberg’s efforts to determine how to compensate the grieving families – and get them to agree to the terms. In the film, Feinberg (Michael Keaton) and his team are up against some heated and emotional opposition, in particular from Fix the Fund leader Charles Wolf (Stanley Tucci), whose wife, Katherine, was killed in the World Trade Center attacks. “My wife is not a statistic,” Wolf tells Feinberg. Along the way, Feinberg – working pro bono – learns this in a more than abstract way: that these victims are more than statistics, worth more than any formulaic payout he can offer.

Rebuilding Hope: The Children of 9/11 on Discovery+

Among the families of victims of the 9/11 attacks were children who were not yet born; their mothers were pregnant when their fathers were killed. A new documentary Rebuilding Hope: The Children of 9/11 visits with four of these families, in particular the children who were born after their fathers died. Twenty years later, they are young adults, at college or on other adventures. They reflect, with their mothers, about how they might have been influenced by their absent fathers – and by the holes left by those absences. “I see my dad walking into the building,” says Gabriel Jacobs, whose father, Ari, was at a conference at Windows on the World that morning. “I see him on the top floor. And I think he knows he’s going to die. He’s just hoping my mom and I are going to be okay.” Directed by Ellen Goosenberg Kent, the special is now streaming on Discovery+. 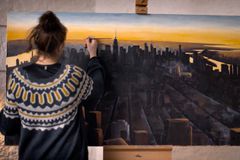 Opinion
Netflix’s Worth is a sensitive portrayal of 9/11 through the eyes of the victims’ families and their advocates
September 3, 2021 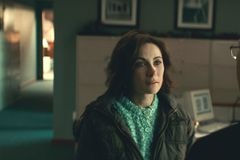 Apple TV Plus to debut Broadway production of Come From Away on eve of 9/11 anniversary
August 4, 2021 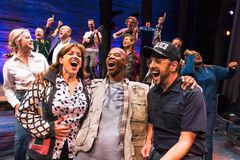