"There are moments in the history of this show that we will remember for the rest of our lives," said rapper LL Cool J, the dapper if unexceptional host of the 54th annual Grammy Awards, held Sunday evening in Los Angles. He might have been a touch over dramatic with his boasting forecast, but, true enough, the gala had many unforgettable happenings – for good and for bad.

A Prayer for Whitney

As the television camera panned over big-name artists such as Tony Bennett, Paul McCartney and Lady Gaga, LL Cool J solemnly read a prayer for Whitney Houston, the troubled singer who died, at age 48, in the Beverly Hilton Hotel a day earlier. "Heavenly Father," he began, "thank you for sharing our sister Whitney with us. Today our thoughts are with her mother, her daughter, and all of her loved ones. And although she is gone too soon, we remain truly blessed to have been touched by her beautiful spirit and to have her lasting legacy of music to cherish and share forever. Amen."

Adele's clean sweep of wins in all six of her categories represented a triumph of pure song and voice over pop shenanigans and kooky looks. The first trophy handed out during the televised portion of the proceedings was for best pop solo performance, with the sensibly coifed Adele beating out the blue-haired Katy Perry, the pompadoured Bruno Mars, the absent singer named Pink and a weirdly attired Lady Gaga, who wore a frightened expression to go with her bright yellow hair, fish-net veil and gold sceptre.

After the big win in 2011 by Montreal rockers Arcade Fire (best album for The Suburbs) Canadian talent held a lower profile this time around. Caroline Robert won for her packaging of The Suburbs, and the Toronto singer Melanie Fiona scored a pair of trophies for her duet on Cee Lo Green's Fool For You, but the other nine nominations failed. Losers included rapper Drake and DJ Deadmau5 (both zero-for-thee), James LaBrie (singer for veteran progressive rockers Dream Theater), the hard-rockers Sum 41 and soundtrack composer Ryan Shore (nephew of Oscar-winning composer Howard Shore).

The Deep: That's How Adele Rolls

We could look at lovely Gwyneth Paltrow all day, but for this occasion we couldn't wait until she stopped talking and introduced Adele, who was to sing in public for the first time since her throat surgery. The star was fairly flawless, and never seemed worried about her voice on a powerhouse performance of Rolling in the Deep.

Jennifer Hudson's Tribute to Whitney Houston: What's Not to Love?

An elegant rendition of I Will Always Love You, the hit ballad for Houston from The Bodyguard soundtrack, was the night's most attractive moment. Hudson received a standing ovation, just as she did when she performed You Pulled Me Through at the 2009 Grammys, in what was one of her first performances after the murder of her mother and brother. That same year, Houston handed Hudson a Grammy for best R&B album.

Perhaps emboldened by the no-show from her one-time Grammy nemesis Kanye West, the country songstress Taylor Swift was in spunky form all night. After winning one of her two trophies for the single Mean during the Grammy pre-telecast, she admitted that there was "really no feeling quite like writing a song about someone who's really mean to you and makes your life miserable and then winning a Grammy for it." Later, during the broadcast performance of the song, she gamely (if uncomfortably) used a banjo and threw in the cheeky line – "Drunk and grumblin on about how I can't sing" – which might have been a reference to West's boorish stage-crashing behaviour at the 2009's MTV Awards or a winking nod to her off-key Grammy duet with Stevie Nicks in 2010. Or both.

After a taped video spoof of The Exorcist, the Trinidad-born American rapper Nicki Minaj apparently inhabited her demon-possessed alter-ego Roman Zolanski for a wacky live performance of her new tune Roman Holiday. The religious-themed production involved levitation, dancing monks and beautiful stained glass. If there was an actual song in the middle of all the nuttiness, I missed it. In the shadow of Whitney, Adele sweeps Grammys
February 12, 2012 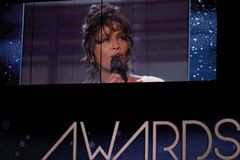 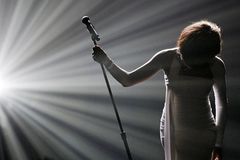