The Golden Globes likes to consider itself an antidote to Hollywood's stuffy, self-serious, and increasingly endless awards season. Hosted by the easily mocked Hollywood Foreign Press Association – what with its mysterious membership comprised of junket press, celebrity photographers, and even a D-movie action star – the awards ceremony is boozy, fluffy, and has a strange weakness for hosts who seem desperate to be anywhere else (and, if you're Ricky Gervais, are happy to tell the audience just that).

But this year, what broadcaster NBC markets as "Hollywood's biggest party of the year!" felt like anything but a disposable and glossy diversion – well, mostly.

As the entertainment industry continues to wrestle with the Harvey Weinstein scandal and the dozens of other allegations of sexual harassment and assault that have been revealed in its wake, Sunday night's ceremony took a few encouraging, cautious steps toward meshing politics and celebrity in this brave new #MeToo era.

The first hint that this year's Globes would be different came before the show even began, as the red carpet – often a sea of colour and blinding bling– was pitch black. Margot Robbie, Angelina Jolie, Salma Hayek, and almost every actress of high- or low-wattage donned black to ensure the night was less about throwaway glitz and more about the sombre #MeToo and #TimesUp movements – two social-media fuelled conversations that seek to upend the misogyny rampant in Hollywood and nearly every other industry.

"Black is important because it gives us the opportunity to show that we are all one," said Lena Waithe, who works on the Globe-nominated Netflix series Master of None. "It's not just about sexual harassment. It's also about ending homophobia, racism. No one should have to suffer in the workplace for pursuing her dream."

Most male performers took up the black-is-the-new-black style, too – though that's a far easier task given the award circuit is habitually populated by handsome actors in black tuxedos, anyway. (Perhaps they should have been encouraged to wear pink pussyhats left over from the women's marches this time last year, to prove their true solidarity.) At least stars such as Denzel Washington, Ryan Seacrest, and Joseph Fiennes took the memo a bit further, opting for black shirts as well as black tuxes.

For the most part, the tactic worked – seeing a wall of black added a funereal tone to the sun-baked proceedings, though a few artists got creative and tenacious in adding heft to the message. Connie Britton, for instance, wore a black shirt adorned with the words, "Poverty is sexist." And Debra Messing criticized television network E! for paying its female talent less than its male counterparts ... while being interviewed by E!

But beyond costume decisions, the red carpet offered a too-rare occurrence of celebrities putting their money where their mouths are.

In a bid to put as large a spotlight on victims as has been shone on predators, eight actresses aligned with the #TimesUp movement were accompanied by activists representing a variety of industries. Globe nominees Michelle Williams, Emma Stone, and Meryl Streep, plus Amy Poehler, Susan Sarandon, Emma Watson, and Big Little Lies' stars Laura Dern and Shailene Woodley used their plus-ones to give voice to sectors plagued by sexism and gender violence. (Saru Jayaraman, an advocate for restaurant workers, was Poehler's guest, while Woodley invited Calina Lawrence, an activist associated with Native American treaty and water rights.)

"We believe we are nearing a tipping point in transforming the culture of violence in the countries where we live and work," the performers said in a joint statement. "It's a moment to transform both the written and unwritten rules that devalue the lives and experiences of women."

That tipping point didn't quite extend itself to inside the Beverly Hilton. While representing a giant step up from 2017 host Jimmy Fallon, this year's master of ceremonies Seth Meyers uneasily mixed industry humour with societal catharsis.

"Greeting ladies and the remaining gentlemen," Meyers said in his opening quip. "It's 2018 – marijuana is finally allowed and sexual harassment finally isn't. It's going to be a good year."

The rest of Meyers's monologue was fine enough – bouncing from Oprah gags that David Letterman would be embarrassed by to tired Christopher Plummer-replaces-everyone jokes – but never more than that. If the Hollywood Foreign Press Association wanted to show it had the courage of its nominees' convictions – if it wanted to truly match the incendiary spirit on display on the red carpet – then the writing needed to be faster, harder, sharper. Or, you know, they could have enlisted a woman to MC.

The winners of the actual awards gravitated more closely toward the feminist theme of the evening. Early in the show, Nicole Kidman won for her portrayal of a woman who fights back against an abusive relationship in HBO's limited series Big Little Lies. And Hulu's The Handmaid's Tale, an adaptation of Margaret Atwood's fiery feminist novel, won best series drama, and star Elisabeth Moss best actress in a drama series.

"Margaret Atwood, this is for you ... we no longer live between the gaps in print. We are the story, and we're writing it ourselves," Moss said in her acceptance speech, quoting the Canadian icon.

But the real #MeToo moment was saved for – who else? – Oprah Winfrey. Upon accepting the Cecil B. DeMille Award for lifetime achievement, Winfrey held the room, and most viewers at home, in the palm of her hand. Using the story of Recy Taylor, an African-American woman who fought for justice after a 1944 rape and died just days ago, Winfrey furthered the #MeToo conversation to a near visceral level of passion and outrage.

"For too long women have not been heard or believed if they dared to speak their truth to the power of those men. But their time is up," Winfrey said, in a speech that will likely echo for generations. "A new day is on the horizon, and when that new day finally dawns, it will be because of a lot of magnificent women, many of whom are here in this room tonight."

And not one minute later, the best director nominees were listed off – all men, as presenter Natalie Portman noted. Because despite the victories and despite even Oprah, this is the Golden Globes. The awards show where Woody Allen was honoured only four years ago with the Cecil B. DeMille Award. Where Harvey Weinstein's name was once uttered with awe on the regular. Where the grossly ahistoric and just plain bad The Greatest Showman was up for best picture – this year! It was hard to take seriously, even if Hollywood's bravest women tried their mightiest. 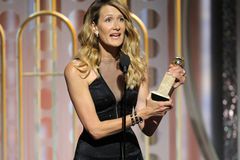 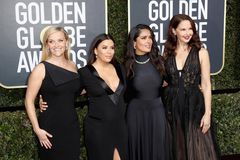