Close to a year ago, the photographer Caitlin Cronenberg was compiling a coffee table book featuring Juno award winners. While I've won five Junos, I've donated four of them to the National Archives in Ottawa. Which left my fifth Juno sitting, seemingly abandoned by its four family members, on my bookcase in my dining room.

The night before my photo shoot, I went to reach for my Juno, figuring I needed to wipe off the three-plus decades of dust it had accumulated. It was gone. Where it once sat, an unseemly pileup of collapsing books had claimed the space. Back in the seventies, the Juno award was a two-foot, frighteningly phallic-looking piece of pyramid-shaped plastic. Fitting, I suppose, given I won my '78 Juno for an album titled Longer Fuse. In other words, this wasn't an easy thing to lose track of, like, say, a guitar pick.

"What the $%#@! happened to my bloody Juno?" I bellowed, stomping, snorting and swearing through my household, as if somehow, should I sound indignant enough, the missing award would magically reappear.

It didn't take long for me to figure out it had been stolen. As for who would want to steal a Juno award, well, that one still stumps me. I mean, can you imagine having an Oscar on your mantelpiece that belonged to Liz Taylor?Due to my work as a musician, songwriter, recording artist and author, hundreds of people stream in and out of my basement studio to help me with my creative projects. And my son, David, has such a wide assortment of friends dropping by I can't keep track of them. Our house is a constant mayhem of music, noise, socializing and business. It vibrates life, as a house should.

However, this meant that there was no way I could trace the Juno Robber.

"Hey, Caitlin," I phoned, hours before our morning photo shoot, "I, um, seem to have lost my Juno. Can you still photograph me for your Juno book without my Juno?"

"You lost your Juno award?" Suspicion curled round the edges of Caitlin's usually friendly voice, leaving me with the sinking feeling that she suspected I'd never actually won a Juno. That for decades I'd been making false claims and finally my bluff had been called.

"If you don't have your Juno, I can't photograph you," Caitlin explained.

"Well, can I borrow, say, one of Gordon Lightfoot's Junos, or Alex Lifeson's? They both live pretty close by."

Why was I sounding so desperate? Surely, this wasn't helping my credibility.

My Juno photo shoot was called off.

Well, life goes on, and I tried to put things into perspective. I mean, they could've stolen my Grammy. Or my Martin D35 guitar, which I bought for $450 (all the money I had) when I was 18. Over the months my anger gave way to bemusement, which ultimately gave way to rueful humour.

"See if it's being sold on Craigslist," a friend advised.

I've been involved in Juno celebrations all week. On Thursday I joined in the Juno songwriting circle hosted by country sensation Johnny Reid, sharing the Massey Hall stage with some musical heroes including Randy Bachman and Sylvia Tyson.

But this is where this story turns weird. As in eerie weird. As I was being taxied to Massey Hall for the soundcheck, my driver turned around to face me when stopped at a red light and whispered: "I have your Juno."

Damned if I didn't just about fall out of the passenger door and sprawl onto Dundas Street.

Initially, the driver refused to disclose how he "discovered" my Juno.

He gave me his price.

"Sheesh - can I pay that with Visa?" I asked, arriving at a dollar amount after a series of back and forth negotiations.

He agreed, provided I add 9 per cent for the alleged Visa processing fee.

"My sound check's at 4, so meet me back at the Remarkable Bean in the Beach at 6 p.m. Once you give me my Juno I'll give you the loot."

My cabbie arrived promptly at 6 p.m., my humongous Juno wrapped in sheets of newspaper. I tore through the newsprint, checking for authenticity, feeling like a drug lord inspecting a suitcase of cash for possible signs of counterfeit.

"Because you've had an account with our cab company for years, everybody knows you," my cabbie explained. "Last year, I picked someone up at your house and drove him all around the city. He tried to bill the fare to your account. When I explained I'd have to call Mr. Hill to verify, the passenger offered up your Juno as payment."

As people in the coffee shop gathered round to see this menacing-looking Juno ("that's not a Juno, that's a goddamned weapon," some wise guy cracked), the cabbie disappeared, returning moments later with a Visa machine.

"Lots of people jump out of my cab without paying," he said forlornly, as I punched in my PIN number and deliberated the merits of tipping the guy who had held my Juno as collateral for close to a year.

It's a hard life being a cab driver, and it turned out this man had been a doctor in Iraq before coming here. And the part about people not paying for his fares struck home. These days, 90 per cent of CDs are downloaded illegally. A facile comparison, to be sure, but still, I couldn't help but like this guy. Sure, it would have been ideal for him to have informed me of this Juno-for-cab-fare exchange when it all went down. Maybe he was embarrassed. Maybe when he saw I was headed downfor the songwriting circle he felt compelled to fess up.

Whatever. The bottom line is now I have my missing Juno. But I'm not looking forward to seeing next month's Visa bill.

Dan Hill is a singer-songwriter best known for his mega-hit Sometimes When We Touch. His memoir, I Am My Father's Son, published in Canada in 2009, was released in the United States this week. The shoes they wore at the Junos
Gallery
November 19, 2010 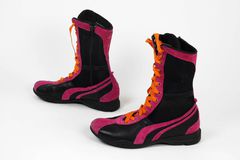 Tuning in to Brand Juno: What the music biz can learn from a thriving awards show
March 25, 2011 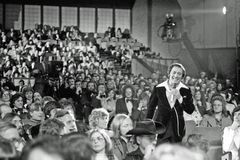 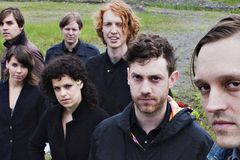 earlier
Backstage at the Juno Awards: A radiant Shania Twain, and more
March 25, 2011 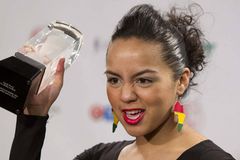