#OscarsSoWhite, sure, but movie fans who watched the telecast of the 88th annual Academy Awards on Sunday night might also reasonably argue, for the first time in years, that #OscarsSoAlive. Kicking off with a blazing monologue by Chris Rock about Hollywood's sorority-style racism, the show crackled with unpredictability, whimsy, outré jokes and even a handful of unusually poignant moments.

In photos: The 88th Academy Awards

Yes, there were some tin-eared production choices: Surely something else – anything else, really – would have been more appropriate music with which to curtail long-winded acceptance speeches than Wagner's Ride of the Valkyries. A silly S&M pantomime during The Weeknd's Oscar-nominated song Earned It, from the even sillier Fifty Shades of Grey, was cringe-inducing. Yes, again, #OscarsSoLong. (And no, that's not another reference to Fifty Shades of Grey.) But a show that has been flirting for years with existential pointlessness may have found new reason for being on Sunday night. At the very least, it felt like a little bit of oxygen had been let in to the Dolby Theatre on Hollywood Boulevard.

And so we bring you the highs, the lows and a few things that left us scratching our heads from this year's Oscars.

Chris Rock for the win

For all the money usually splashed out on CGI trickery and slick song-and-dance numbers, Rock proved that all a show needs to grab an audience's attention and hold it is a man, a mission and a microphone.

"Man," he said, taking the stage after an inspirational montage of the year in film, training his sights on the #OscarsSoWhite controversy, "I counted at least 15 black people in that montage. I'm here at the Academy Awards, otherwise known as the White People's Choice Awards."

He brushed off those who had called on him to quit the hosting gig (for which he'd been hired months before the acting categories turned up 20 white nominees) and delivered what appeared to be a shot across the bow of activists such as Al Sharpton, who staged an anti-Oscars protest Sunday afternoon only a few metres from the Dolby Theatre.

Rock noted that the issue had never come up during the 1950s and 60s: "We had real things to protest at the time. You know, we were too busy being raped and lynched to care about who won best cinematographer. You know, when your grandmother's swinging from a tree, it's really hard to care about best documentary foreign short."

He told a story about meeting President Barack Obama at a fundraiser and quietly telling him, "Mr. President, you see all these writers and producers and actors? They don't hire black people – and they're the nicest white people on Earth. They're liberals!" And he added: "Is Hollywood racist? You're damn right Hollywood is racist. But it ain't that racist that you've grown accustomed to. Hollywood is sorority racist. It's like, 'We like you, Rhonda, but you're not a Kappa.' "

Sarah Silverman channels her turn in The Aristocrats

Introducing Writing's on the Wall, from the Bond film Spectre, the comedian embarked on a brief routine bleakly sending up the film franchise's sexual politics. "I guess I was a Bond girl, in that I had sexual intercourse with James Bond, followed by never hearing from him again," she said.

"Like, never, like not even a text. And I know he has a cellphone – he has four of them. Whatever. Maybe he likes sleeping with vulnerable women with heavy Jewish boobs and never contacting them again. Maybe that's his thing." She paused, slipping in a sly smile. "Know what my thing is? Being in front of 80 million people on live TV and saying whatever comes into my mind. … I don't wanna say he's terrible at sex, but he did sleep with 55 women in 24 movies, and most of them tried to kill him afterwards."

Introducing the documentary short subject category, comedian Louis C.K. told the audience that, unlike just about all of the other Oscars, this award has the power to change the winner's life: "These people will never be rich as long as they live. So this Oscar means something. Because all they do is tell stories that are important." Looking out at the audience, he said, "Now, you all do it, but you also get rich. But these people, all they got – this Oscar is going home in a Honda Civic. This Oscar is going to be the nicest thing they ever own in their life. It's going to give them anxiety just to keep it in their crappy apartment."

In case you needed reminding that Hollywood is a Democratic town, the audience rewarded Vice-President Joe Biden with a standing ovation merely for showing up at the ceremony. After they sat down, he announced that he was there to introduce an initiative that calls on people to sign an online pledge (at ItsOnUs.org) to help prevent sexual violence. To cheers, he introduced his "good friend" Lady Gaga, who delivered a powerful performance of Til It Happens to You, from the campus sexual assault documentary The Hunting Ground. In the song's final minute, dozens of survivors of sexual assault joined Gaga onstage, with words – "Survivor" "Unbreakable" "It Happened to Me" – scrawled on their forearms, bringing the audience to tears.

After Rock brought out three tuxedo-clad children who were carrying briefcases and introduced them – with Asian and Jewish-sounding names – as being from the accounting firm that tabulates the Oscars, he joked: "If anybody's upset with that joke, just tweet about it on your phone, which was also made by these kids." And so people did, excoriating Rock for his apparent racism. (Few seemed interested in a discussion about the labour practices of the smartphone industry.)

Was the Oscar orchestra drunk?

They played The Way We Were as Patricia Arquette took the stage, Phil Collins's Against All Odds as Daisy Ridley and Dev Patel came out to present an award, and we're pretty sure they played Wagner's Ride of the Valkyries every chance they got – even as documentary short subject winner Sharmeen Obaid-Chinoy was in the middle of her acceptance speech, declaring proudly that her film A Girl in the River had prompted the Prime Minister of Pakistan to pledge a change to the law on honour killings.

Do we really need another Donald Trump joke?

Introducing the best visual effects category, actor Andy Serkis, who has made a stellar career out of playing creatures as varied as Gollum in The Lord of the Rings and the title role in King Kong, quipped: "If you were to put on a motion-capture suit right now, you could play anything from a planet-threatening megalomaniacal monster to, um – to Donald Trump. Actually, that's not very diverse. But, anyway …"

Normally reserved for breaking news, a ticker-style crawl was deployed this year that allowed Oscar winners to run a list of thank-yous – to friends, family, crew members, publicists, agents, estheticians, etc. – as they made their way to the stage, in the hope that the newly fettered acceptance speeches might be worth hearing. Often, though, winners simply repeated onstage the same names they had submitted in advance, which ran along the crawls. Or, worse, having submitted a list of, say, 77 names (here's looking at you, Mad Max hair and makeup winners), they found they had nothing much to say.

The banter among most of the presenters was generally light and swift. But while the cameo by everybody's three favourite droids started promisingly – nine-year-old actor Jacob Tremblay leaped up to get a better view as C-3P0, R2-D2 and BB-8 took the stage – it stalled quickly on a couple of bland John Williams jokes and meandered like a Galactic Senate debate, underlining a hard truth: Star Wars and the Oscars have never really gotten along very well.

Accepting his Oscar for best actor, The Revenant's Leonardo DiCaprio sounded the alarm on climate change: "Our production needed to move to the southern tip of this planet just to be able to find snow," he said. "Climate change is real, it is happening right now. It is the most urgent threat facing our entire species, and we need to work collectively together and stop procrastinating. We need to support leaders around the world who do not speak for the big polluters, but who speak for all of humanity, for the indigenous people of the world, for the billions and billions of underprivileged people out there who would be most affected by this."

It was a heartfelt speech, but it fell oddly on the Canadian broadcast, coming after a seemingly endless stream of ads for Cadillac, Hyundai, Toyota, Nissan and other automotive brands. 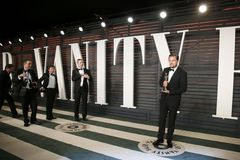 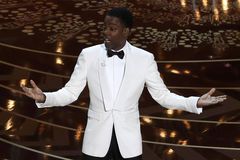