The 68th Cannes Film Festival opens Wednesday night, and lovers of international film are left like a cat in a room full of rocking chairs: Which way to jump? As a starting list, here are 10 features at this year's festival I can't wait to see:

The Taiwanese director Hou Hsiao-Hsien's first Cannes film in seven years is an old-fashioned martial arts epic about a female assassin who falls in love with her target. In production for five years, this is a big-budget departure for the often minimalist, elliptical filmmaker, considered a modern master of narrative filmmaking.

From director Todd Haynes comes this fifties-set drama (based on the Patricia Highsmith 1952 novel The Price of Salt) starring Rooney Mara as a New York department store clerk who begins a relationship with an older married woman (Cate Blanchett). Given the cast and Haynes's proven gift for period women's drama, this should be first-rate.

Portuguese filmmaker Miguel Gomes gained international attention with his 2012 postcolonial reverie, Tabu. This follow-up, based on the tales of Scheherazade, uses a collection of short stories to explore the Portuguese economic malaise. Any movie at Cannes that runs for six hours (it will show in three separate screenings) when screen real estate is at a premium must be a masterpiece.

French critics have referred to "the Desplechin generation" to describe filmmakers born in the shadow of the French New Wave, and Arnaud Desplechin (Kings & Queen) makes resonant ensemble dramas with absurdist touches. Fortnight director Edouard Waintrop says the film may be Desplechin's "best and most moving feature" about an "excruciating and glowing quest for time and lost loves."

Greek director Yorgos Lanthimos, whose absurd, political dramas Dogtooth (2009) and Alps (2011) topped lots of top 10 lists, makes his English-language debut in this dystopian fantasy starring Colin Farrell, Rachel Weisz and Léa Seydoux. In the future, single people have 45 days to find a mate, or get turned into animals.

Orson Welles and Roman Polanski both made film versions of Shakespeare's drama, and while Australian director Justin Kurzel isn't quite in their league, his two leads – Michael Fassbender and Marion Cotillard – are too good to miss.

The Thai director Apichatpong Weerasethakul, who won the Palme d'Or in 2010 for his Uncle Boonmee Who Can Recall His Past Lives, blends real life, reverie and dreams in unique and profound ways. His latest is the story of a middle-aged housewife who is caring for a soldier with sleeping sickness, who falls into a hallucination.

China's Zhangke Jia's specialty, in films such as A Touch of Sin, is the psychological alienation as an effect of China's rapid progress. His current film is set over three time periods, the 1990s, the present and 2025, in Australia, when the child of the present-day characters works in a casino and can only read one word in Chinese: "mother."

Pixar, once both critical and popular darlings, have slipped since 2009 with its last great film, Up, also directed by Pete Docter, who came up with this storyline. Inside Out is set in the mind of a young girl where five emotions – Joy, Anger, Disgust, Fear and Sadness – battle it out for control. The emotional categories echo the universal facial expressions outlined by psychologist Paul Ekman, author of the book Emotions Inside Out.

The Sea of Trees

Lincoln car commercials aside, Matthew McConaughey has been on a roll lately and this drama about a suicidal American who meets a similarly depressed man (Ken Watanabe) in Japan sounds intriguing. The predictably unpredictable director Gus Van Sant won the Palme for his chilling school-shooting drama, Elephant, in 2003.

Canada’s filmmakers to uphold cinema traditions at Cannes
May 8, 2015 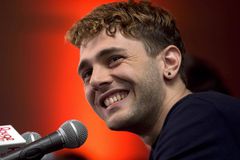