When the actor David Oyelowo (Selma) read the script for his latest film, Queen of Katwe, which will have its world premiere at the Toronto International Film Festival on Saturday night, he wasn’t nervous that it was being made by Disney – “I was shocked,” he said in a phone interview prior to his arrival in Toronto.

“I kept saying, ‘Did Disney not get the memo as to what this film is and has to be, who it’s about, where it’s set?’ ” he continues. “Cinematically, Africa is often portrayed to be all doom and gloom. But Queen of Katwe is a transcendent, joyful, hopeful, self-possessed, self-motivated story that we don’t see told about Africa, certainly not in a studio film.” (Oyelowo’s other TIFF film, A United Kingdom, a true, interracial love story set in 1947, also takes a fresh look at Africa.)

Queen of Katwe is the true story of 11-year-old Phiona (newcomer Madina Nalwanga), a wallflower who lives in a Ugandan slum, but who has a prodigious, natural talent for chess. Oscar winner Lupita Nyong’o plays her mother, and Oyelowo is her coach. “So it’s the most unlikely game, with the most unlikely girl, in the most unlikely place,” Oyelowo says. 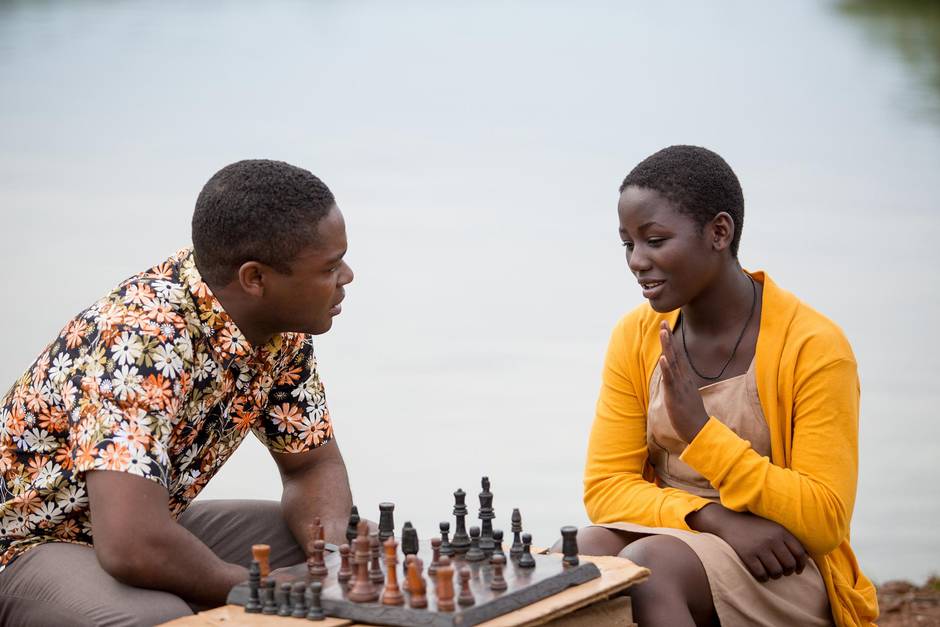 David Oyelowo and Madina Nalwanga star in Disney’s Queen of Katwe, the vibrant true story of a young girl from the streets of rural Uganda whose world rapidly changes when she is introduced to the game of chess.

What he quickly realized, though, is that Queen of Katwe was a passion project for Tendo Nagenda, Disney’s executive vice-president of production, who is of Ugandan descent. “He walked that film up and down the halls of the biggest media company in the world for a few years,” Oyelowo says. “In a bid to see a reflection of himself on film, he fought for that story to be told – that’s why this miracle of this film happening at this company has come to pass.”

The fact that Queen of Katwe is premiering in a splashy slot at TIFF also suggests Disney believes it has a crack at something that’s eluded their live-action films for decades: attention from Oscar.

Disney’s animated features dominate the Academy Awards, of course. But in the 1990s, a fair number of their non-animated offerings received nominations, too: Pretty Woman, What’s Love Got to Do with It, Quiz Show, Nixon, Up Close and Personal, The Insider, The Sixth Sense. The bulk of those nods, however – and nearly all the wins – came from the technical and craft side: production design, costumes, score, song and so on.

Since 2000, even fewer live-action Disney films have received Oscar nods. And in the so-called prestige categories (acting, writing, directing and best picture), the wins are thin on the ground. Martin Landau won a supporting actor Oscar for Ed Wood in 1995. Daniel Day-Lewis won best actor for Lincoln in 2013 and Mark Rylance won best supporting actor for Bridge of Spies in 2016 (and both of those were part of Steven Spielberg’s partnership with Disney). That’s it. 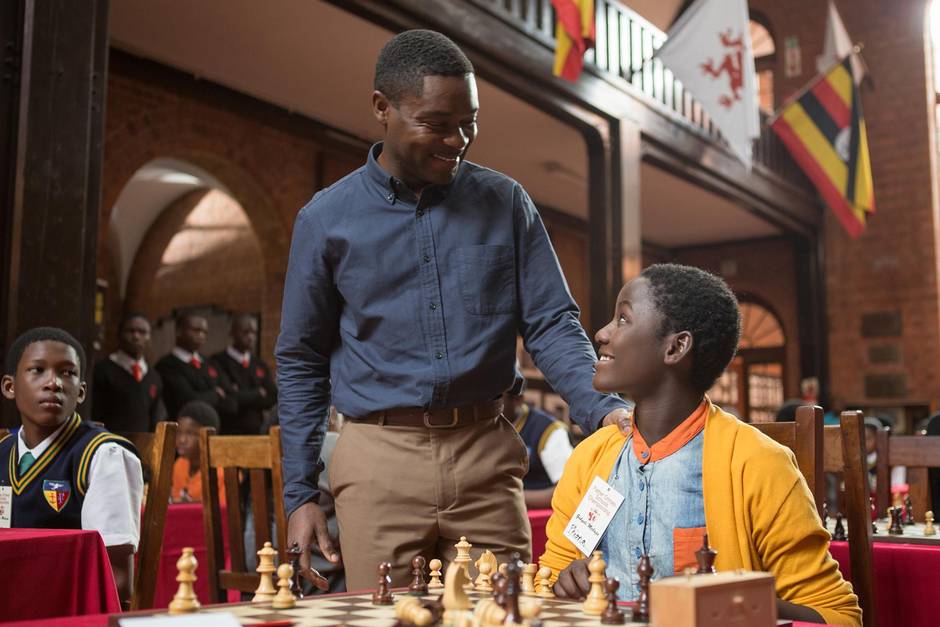 While Disney's animated features dominate the Academy Awards, it's live-action films don't fare as well, so a full-throttle Oscar campaign for Queen of Katwe could be significant.

So a full-throttle Oscar campaign for Queen of Katwe could be significant. “I’m not going to lie to you and say that kind of attention wouldn’t be lovely,” Oyelowo says. “It amplifies films and makes more people see them, and that’s what you want. But because Disney makes films that are commercial and life-affirming, we almost feel we may get dismissed. People might assume we’ve given it the fairy-dust treatment, as opposed to the authenticity that's there.” (Oyelowo has experience being overlooked by Oscar: His performances in Selma and The Paperboy deserved nods.)

Disney wouldn’t have made the film if they didn’t feel it had Disney elements, Oyelowo says: “At its core, it is a Cinderella story, an unlikely girl who collides with a near-magical scenario and becomes a champion. But the difference here is location, and the people who are getting to tell the story.”

The director, Mira Nair (The Reluctant Fundamentalist), was born in India and has lived in Uganda for 27 years. She shot in the very slums where the story is set, and didn’t sugar-coat the poverty. Her child actors are local first-timers who underwent a two-month acting boot camp just before the cameras rolled. Her leads spent their formative years in Africa – Oyelowo in Nigeria and Nyong’o in Kenya. And though this is a Cinderella story, it’s the first I’ve seen where Cinderella’s mother cautions her not to get pregnant.

“I can’t lie to you: There was a moment of pause around the issue of teenage pregnancy in a Disney movie,” Oyelowo admits. “But it’s a big problem in Ugandan society, and I commend Disney and Mira for addressing it. It would patronize the audience and belittle the film not to.” 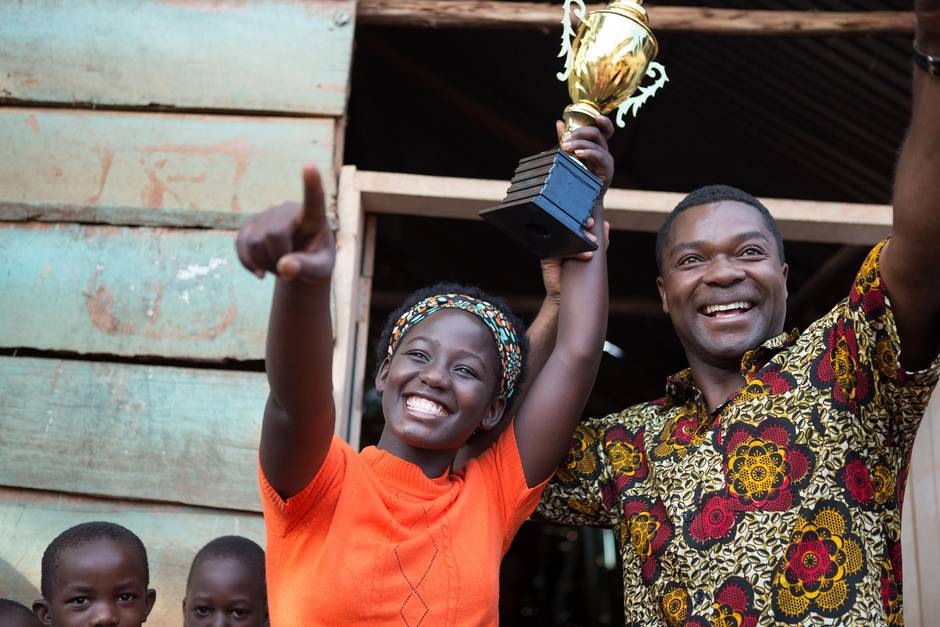 Oyolowo, right, says he was surprised that the film was being made by Disney, because it tells a ‘transcendent, joyful, hopeful, self-possessed, self-motivated story that we don’t see told about Africa.’

Oyelowo is hyper-aware of the sanitization syndrome, of making characters of colour twinkly and “palatable.”

“No one on this film was going to let that sanitization or caricature of what Africans are and how we live on that continent happen,” he says. If that ends up countering another syndrome – #OscarsSoWhite – that’s fine with him.

“The shift I’m discerning, and it’s one I am hell-bent on, is, Let’s stop talking about diversity, let’s just do it,” Oyelowo says. “With these two TIFF films, I can put my hand up and say, I’m doing it.” (As a producer of A United Kingdom, he was instrumental in getting it made.) “I’m going to continue to do it. And I’m going to challenge those around me to do it, especially those in positions of power, who have the notoriety to move the needle. The point beyond which we don’t have to say ‘female director,’ or use the D-word, diversity, yet again if a film is about people of colour – that will be a wonderful day indeed.”